First, in case you think this screed is against sports in general, check out this cool article, which did a statistical analysis of where on the court players score from. This is for all shots taken in the NBA from the 2006 through the 2011 seaons. 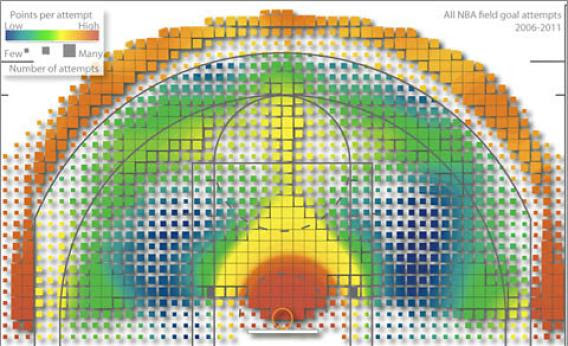 This post is a screed against taxpayers getting fleeced to support private sports teams. "Oakland lawmakers approved $3.5 million toward efforts to redevelop the Coliseum complex along with adjacent land west off Interstate 880. The A's, Raiders and Warriors are all being courted away from the complex they have called home for more than four decades. The A's have for years sought to move to San Jose, the Warriors are considering a proposed arena in San Francisco, and the Raiders are potential tenants in stadiums proposed in both Santa Clara and Los Angeles." Story here.

Why is this happening? Sports team redevelopment does not create jobs, period, and we might want to look at what's happened in other cities. The bottom line for these teams is that it's a losing battle, they've been threatening to leave for years, and they're going to leave, and they're just trying to get some cash out of Oakland before they do. This is a stupid decision. The City Council has a lot of nerve spending $3,500,000 of our money when, as Councilwoman Nancy Nadel says, "I hope everybody realizes that we have no money...As much as you might love the teams when you have no money, it's a very different game."
Posted by Michael Caton at 3/08/2012 07:49:00 AM