We recently evacuated due to the Kincade Fire. The text alerts from CalFire and the Sonoma County Sheriff were great, and sorting Twitter by latest for #Kincadefire was also very useful. I have never been this scared or anxious or felt I had so little control - and we got out with family and critters and papers well ahead of when the fire would have come, but waiting to find out if your house burned down is no fun. We love Sonoma County, but we don't love this aspect of it so much. Climate change is giving Sonoma County LA County's weather, and when you already have forests, they burn, which is how the landscape will gradually look more like LA County (or almost instantaneously, geologically speaking.) The natives who preceded people of European descent here set controlled burns every autumn (and this has been witnessed since before contact), but when you have this many people in non-mobile dwellings that can't be rebuilt in mere days, that's not an option. Low humidity plus longer rain-free periods plus heat and bad Diablo winds (our local foehn winds) are how this happens.

So, a thank you to the people who hosted us and our various critters or who offered and were ready; also to the men and women who put themselves on the line to hold this fire. Had it not been for you, many people would have died, and I wouldn't have a house right now. Take a minute to thank a firefighter, buy them a beer, send a card, whatever. There are few people whose work matters more than theirs, especially in California.

If you spend much time on social media, you will notice (especially on Twitter) Russian troll bots taking advantage of Trump's threat to abandon California even while he promises fire aid to Siberia. They do this by trying to stoke the fires of "CalExit", which may be the dumbest thing anyone has ever thought of (give Trump's party a permanent majority in Washington and dividing yet another of Russia's main competitors.) You'll recognize them when you see them - the one I clicked through on was full of pro-Brexit, pro-Catalonia independence messages, while curiously silent on the protests in Hong Kong or independence for Russia's neglected Far East territories. I wonder why? I Twitter-replied to this effect and my reply was deleted within a minute.

The following pictures were taken from China Camp State Park the following weekend. Fire is about 60 miles north at 75% containment but the smoke layer is obvious and Mt. Tam is still quite hazy. Bay pictures are looking east across the very top of the Bay (curved, with mouth of the Napa River) with Mt. Diablo just visible through the smoke layer in one looking southeast toward Richmond. 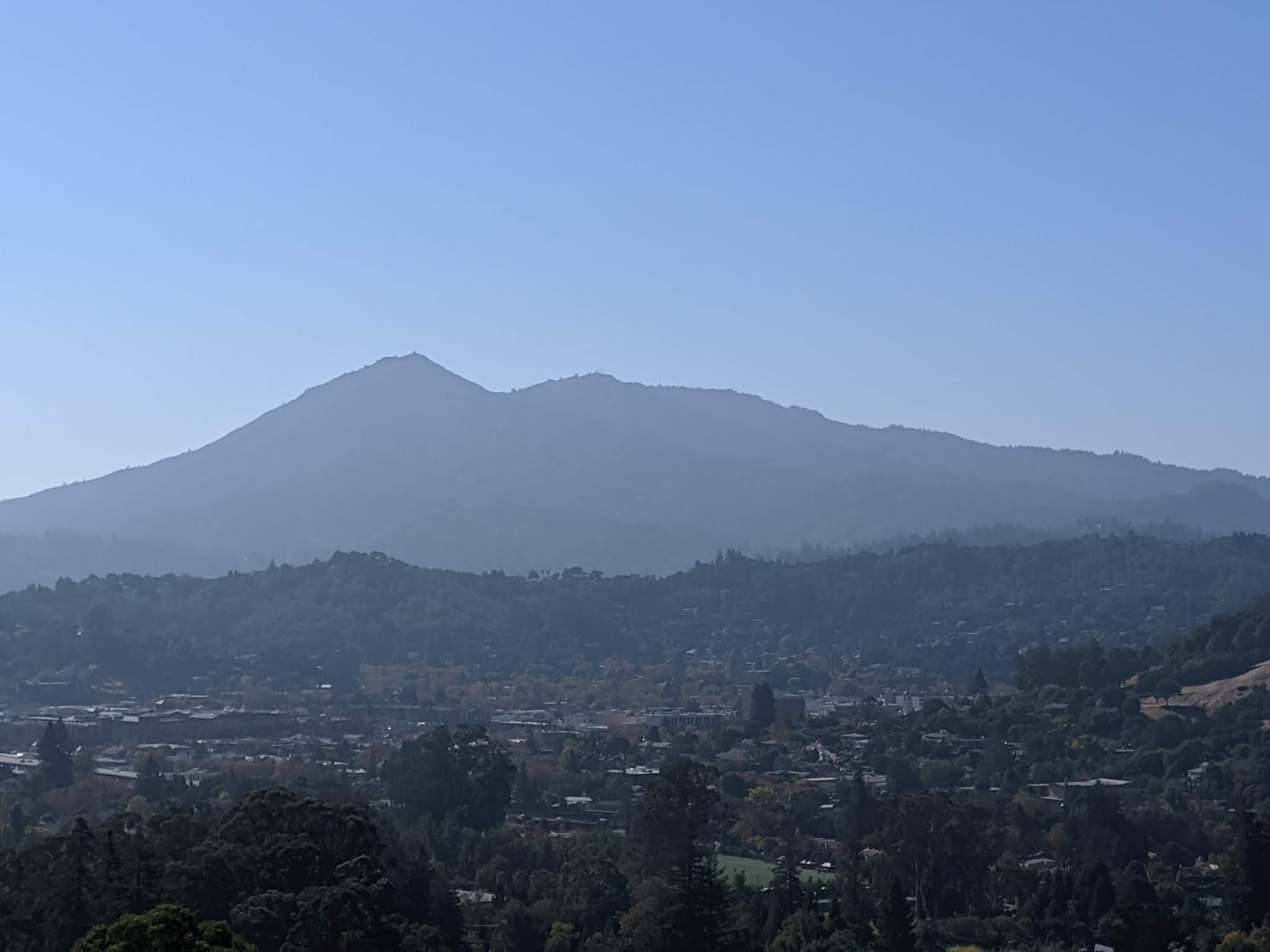 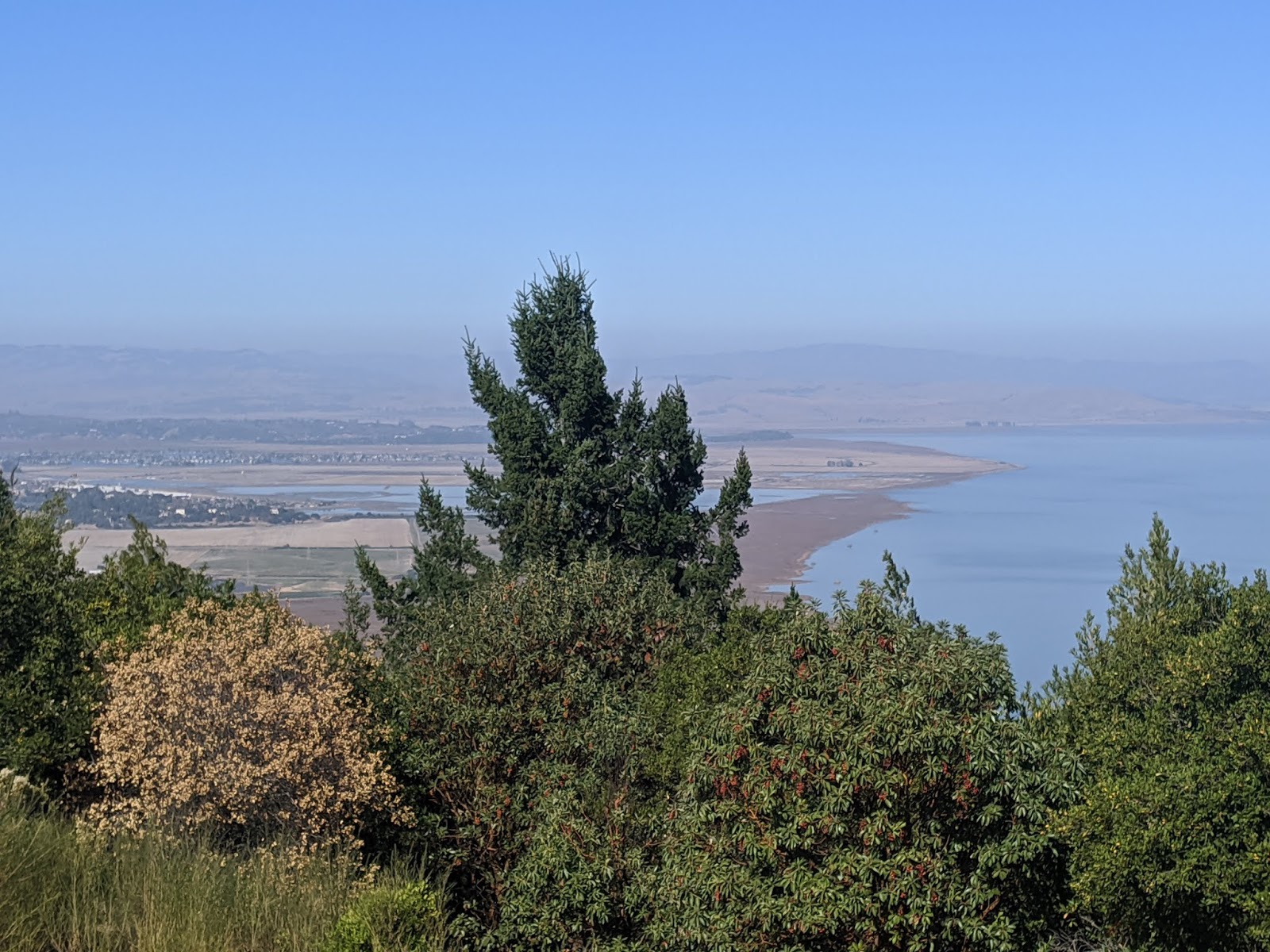 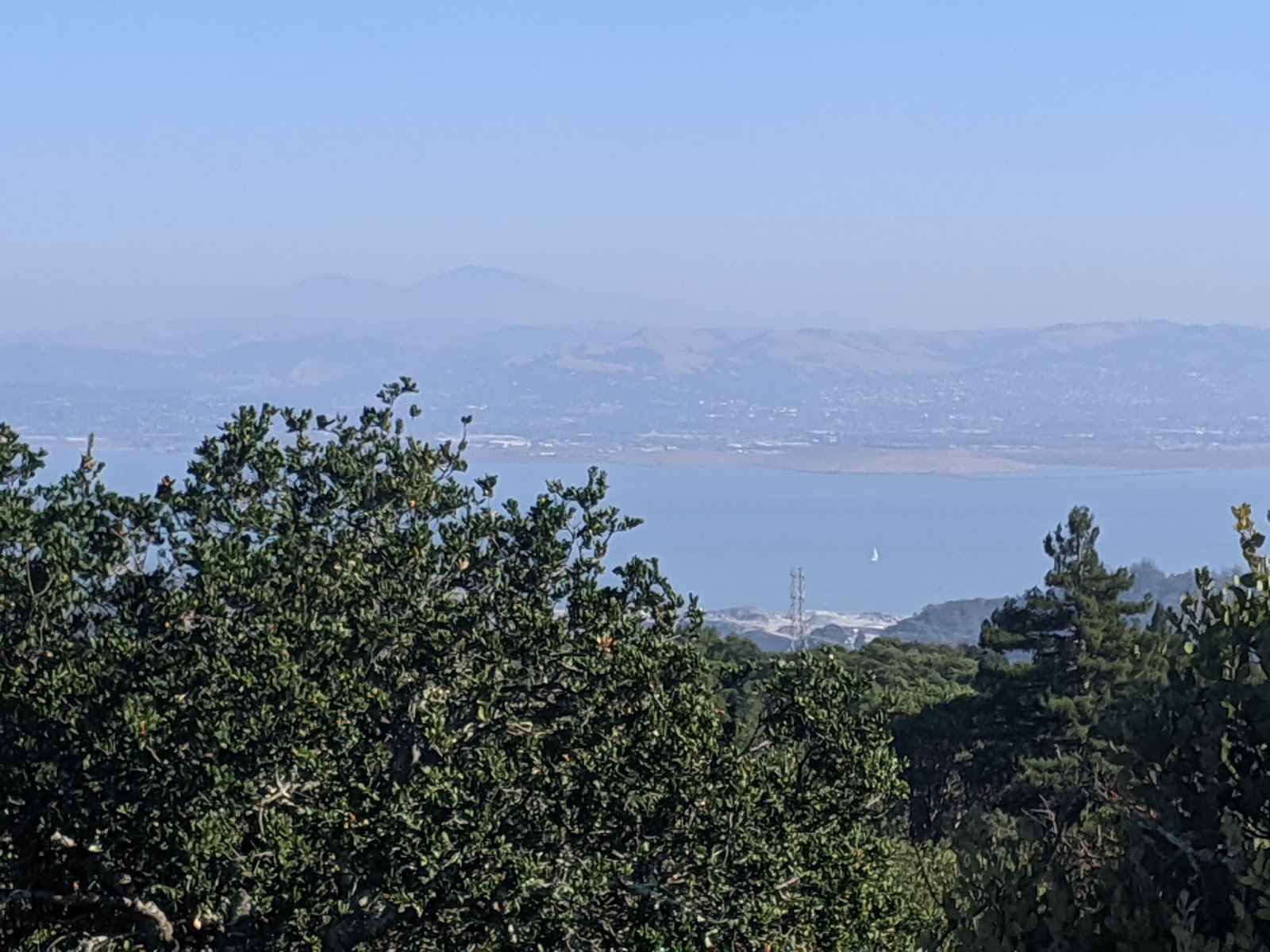 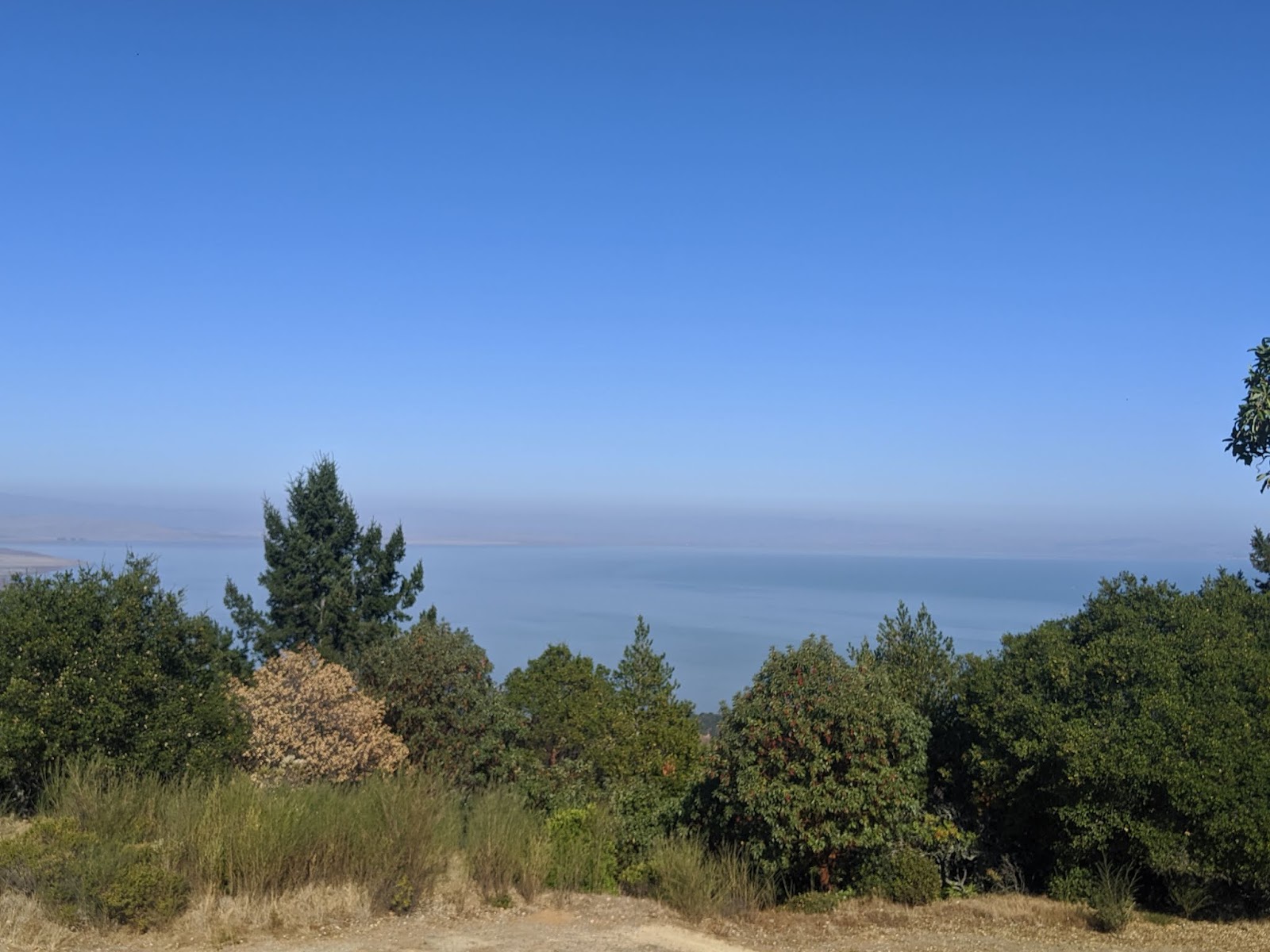 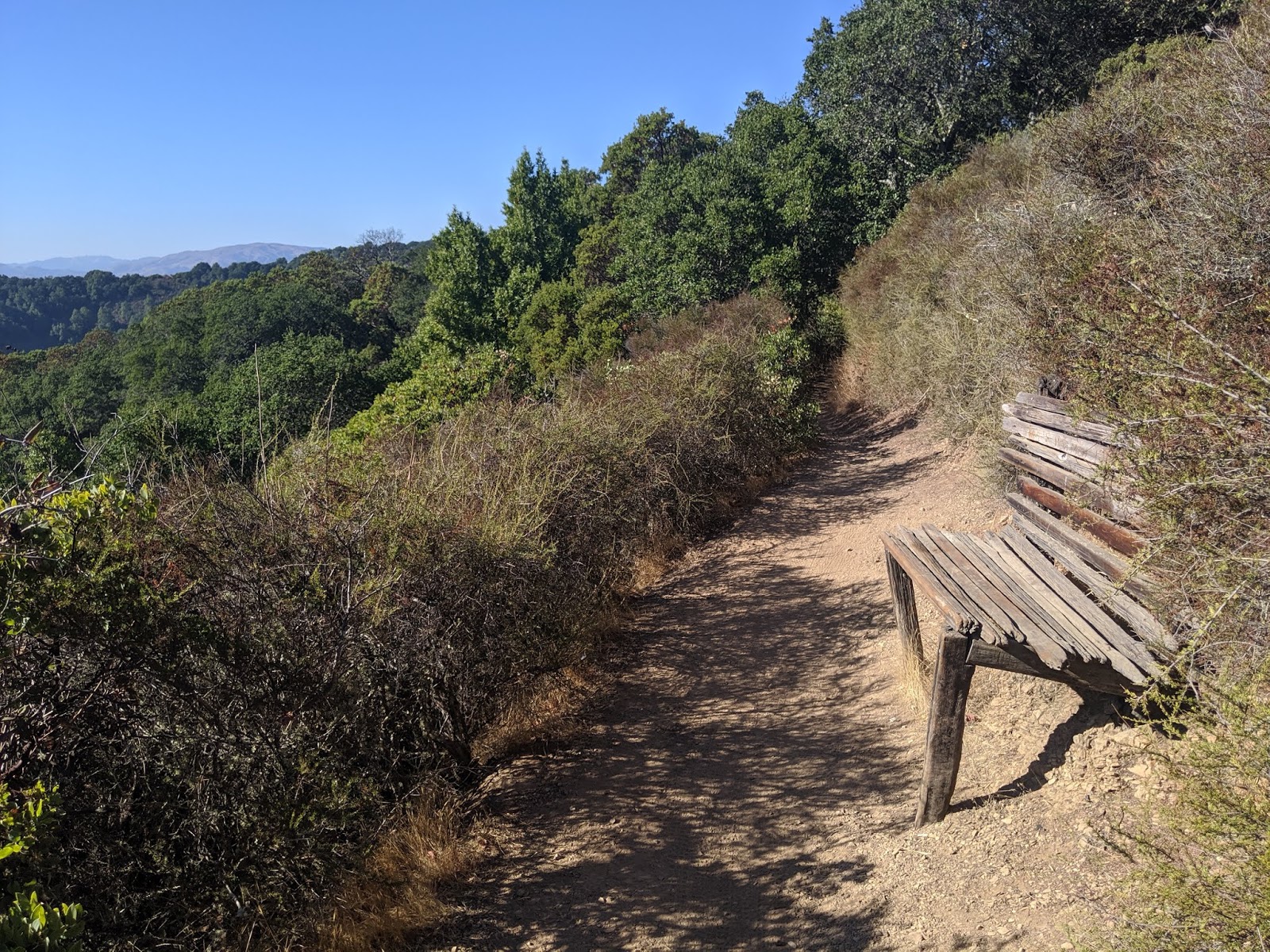 Next three below: you'll have to forgive my obsession with manzanitas. Their bark is the bubble wrap of the natural world. It peels like that as a defense against fungus; I wonder if, as uniquely woody members of the heather family (see ice plant here), this is more difficult for them than other plants, that have specific endochitinases to kill fungus (rubber trees and mangoes both do, but they're in the wet tropics. Incidentally it's this endochitinase that causes allergic cross-reactivity, ie why people allergic to latex are often also allergic to mangoes.) 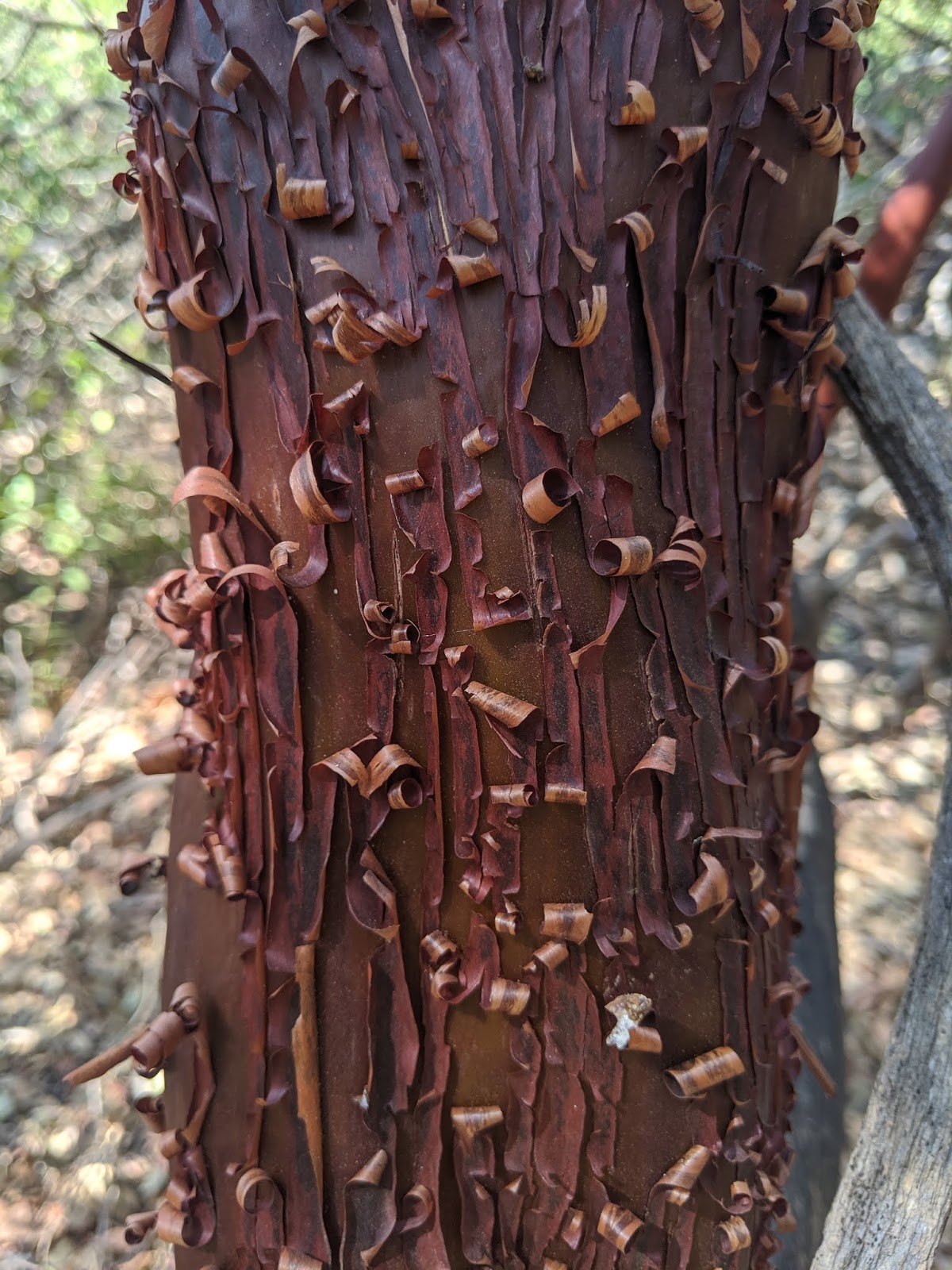 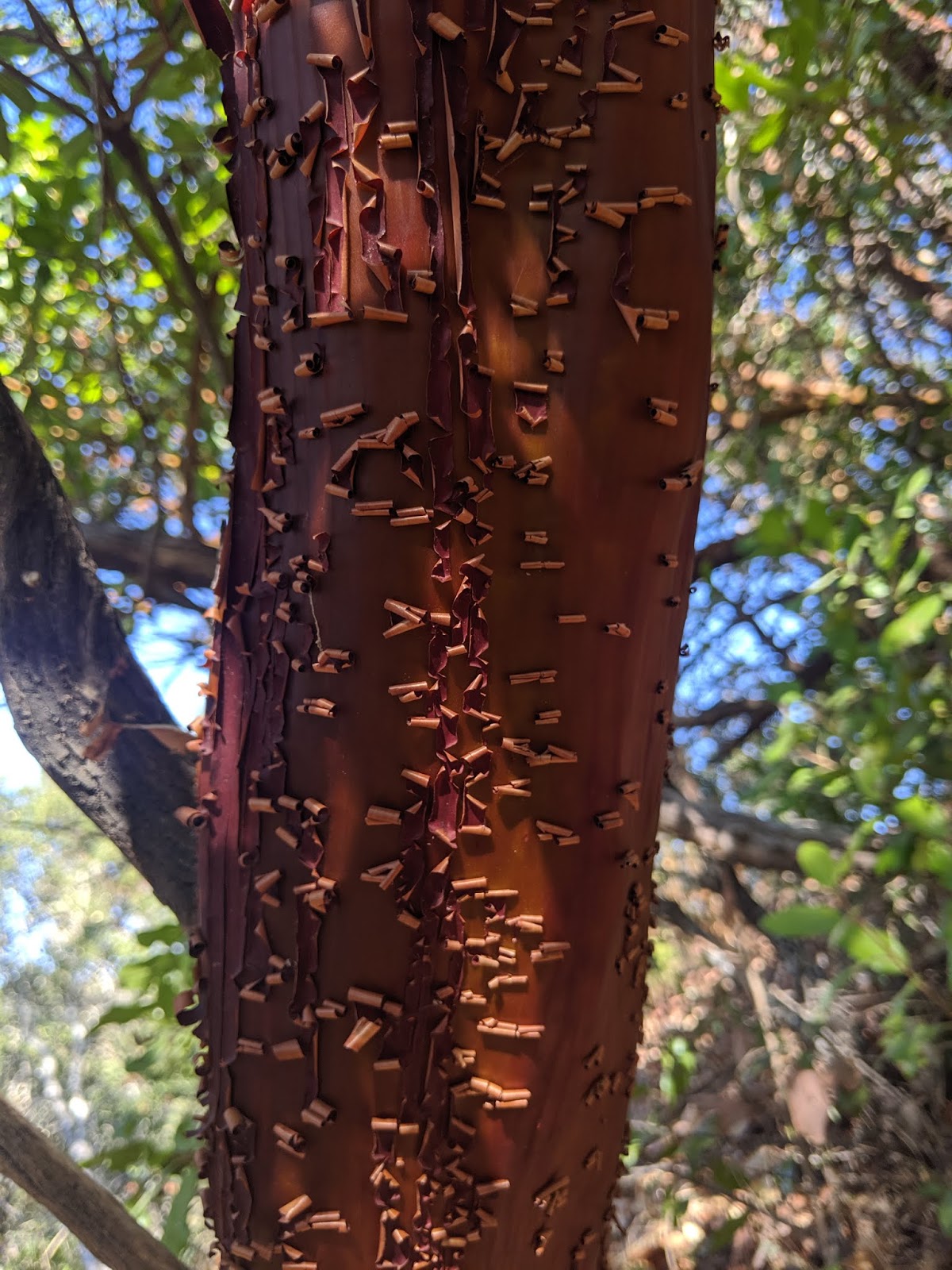 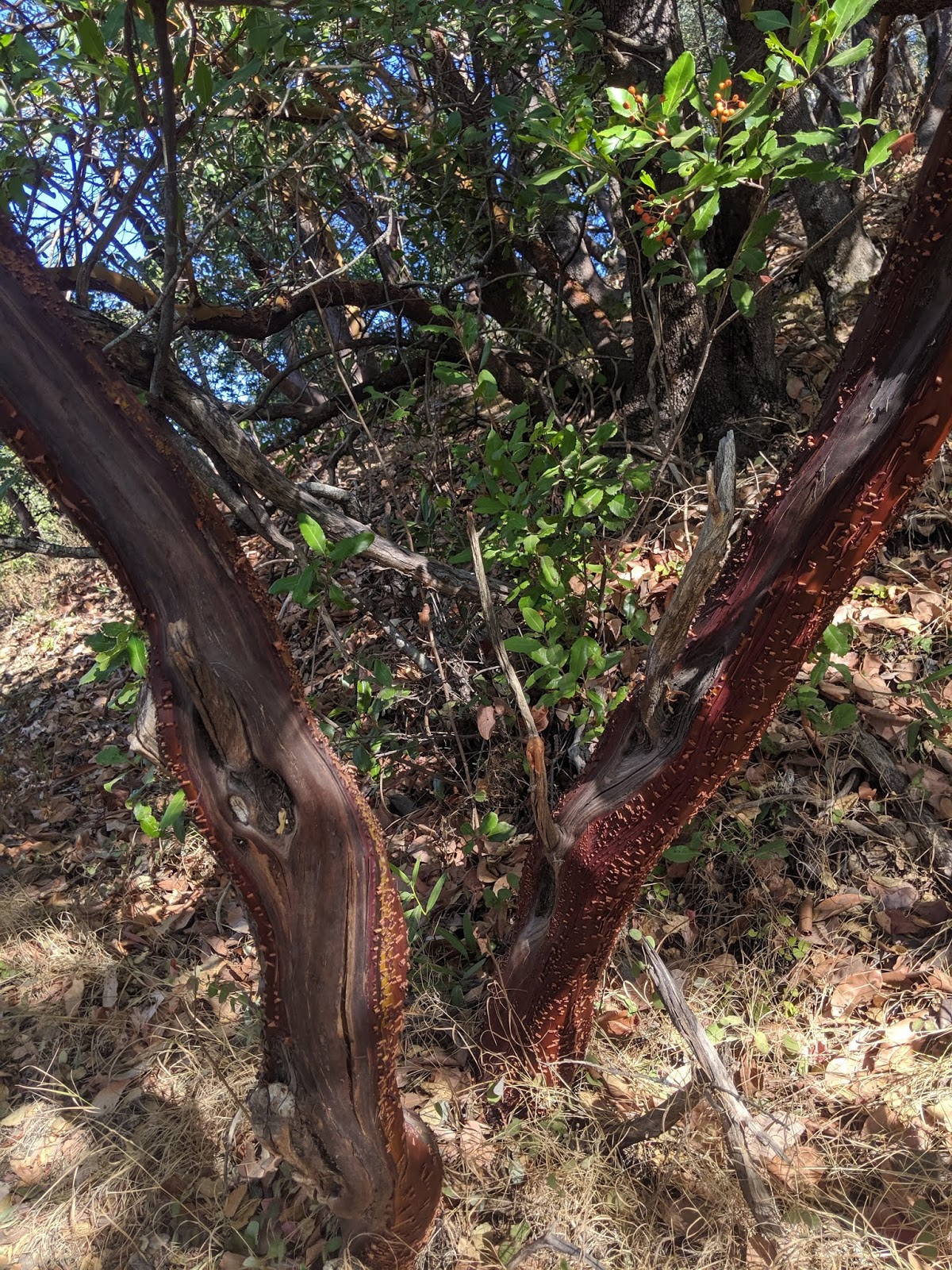 Above: this picture was taken from the International Space Station, looking south along the Pacific Coast, with the Kincade Fire plainly visible. Below: fire-smoke sunsets are obscenely pretty. 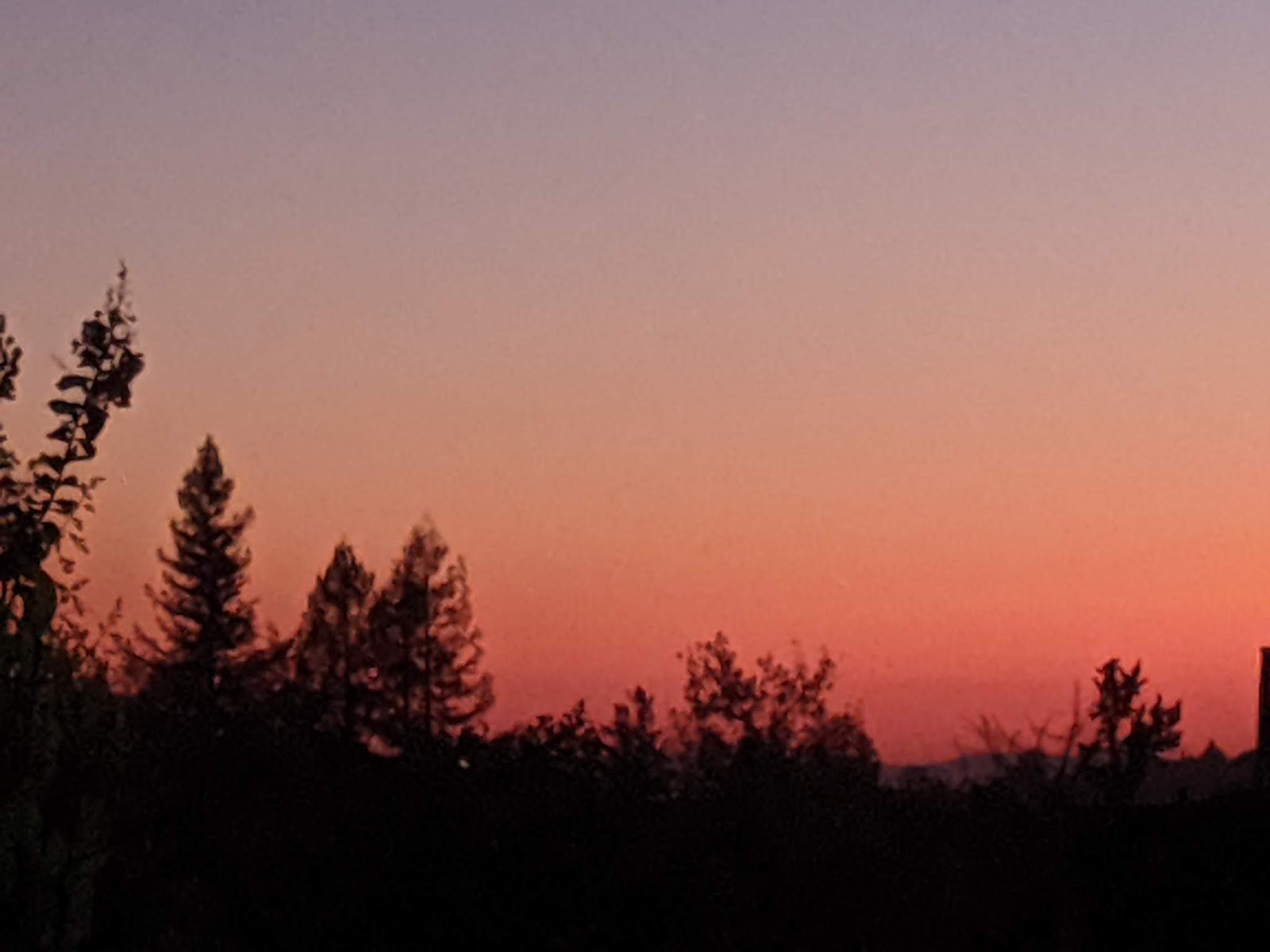 As it happened, the weekend we evacuated we actually had a pre-planned trip which took us to Southern California, and I had all kinds of runs planned down there and of course while we were there, their local foehn winds came through and everything caught on fire there too. So no running in Topanga State Park for me. Instead I ran in Chino Hills State Park, which is the most useless state park I have been in. A cluster of oaks along the canyon bottom, and then the rest of it just brown curved hills covered with those scratchy sticks that poke you (my shins are still paying the price.) Gross. Feel free to skip these pictures, they suck. If you live there, I hope you didn't have to pay more for your property for living near this "natural resource", which I would put on par with the industrialized part of the North Jersey Meadowlands (and not even with cannoli.) Seriously, it's the ugliest state park in California, hands down. Good points: a) fine, I saw a tarantula (see below) and some wild gourds growing, b) it looks nice in the spring when it's green and you're driving past it, and c) I will never have to go there again before I die. The hikes listed on Nobody Hikes in LA are faint in their praise. 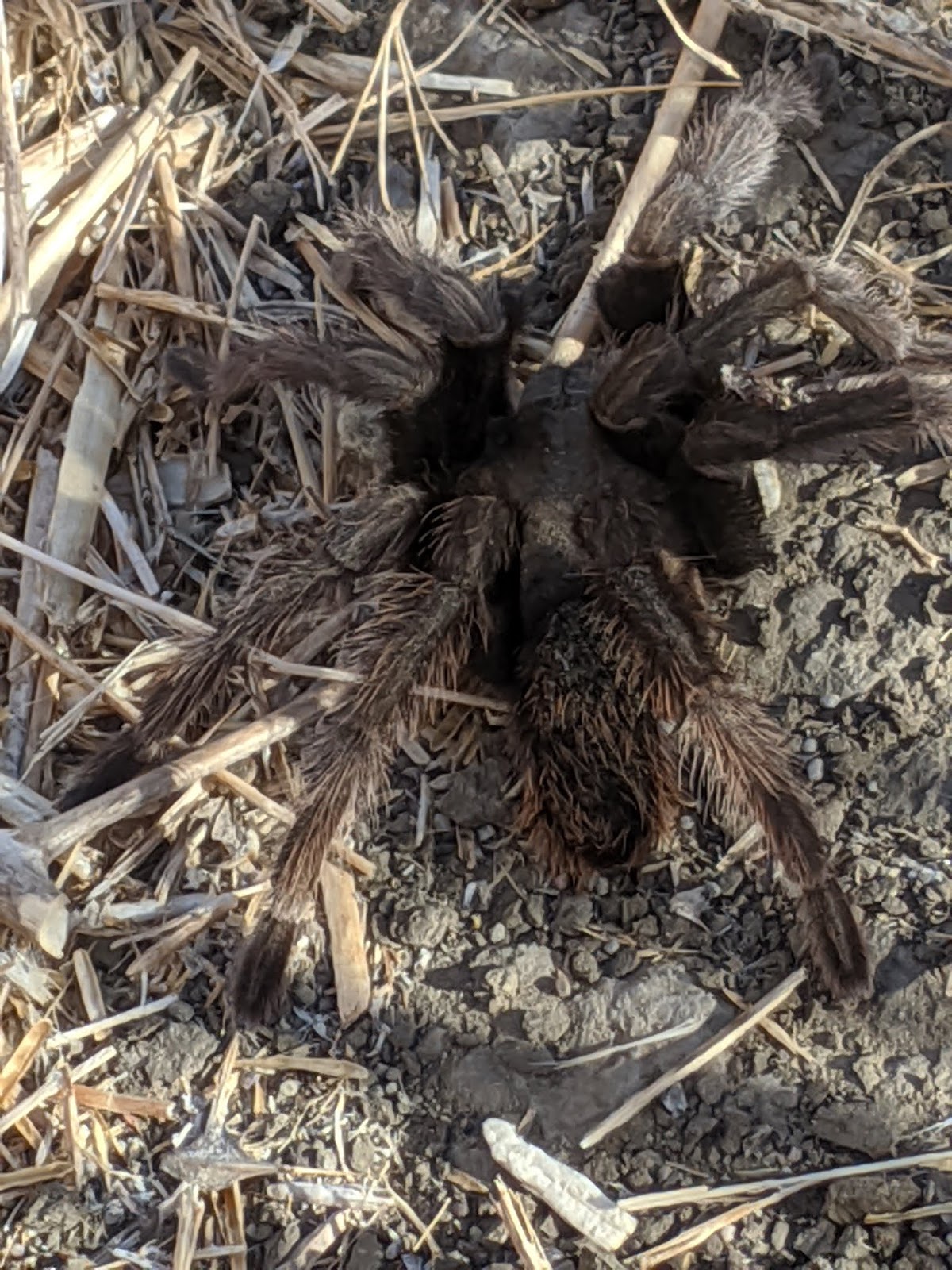 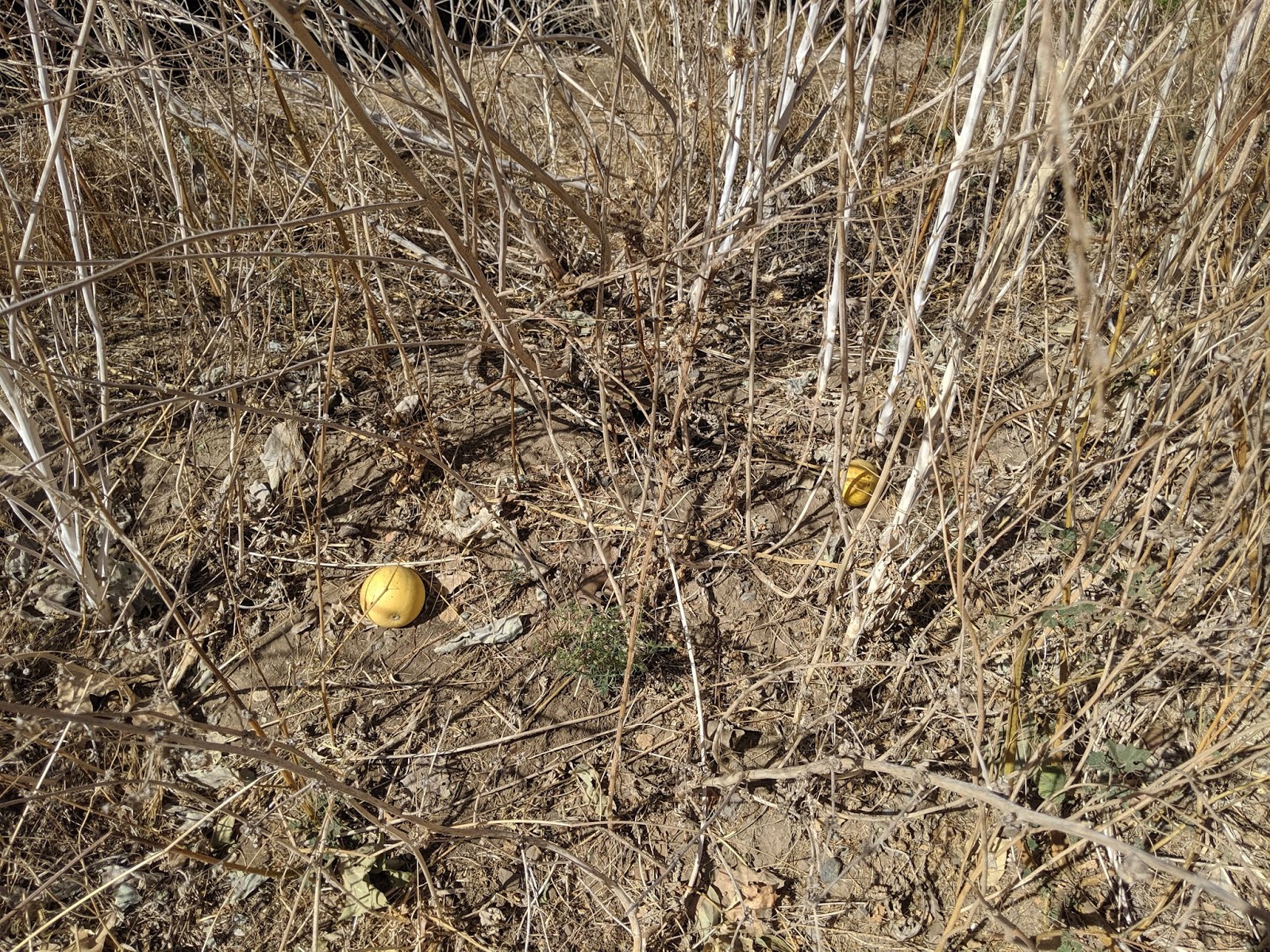 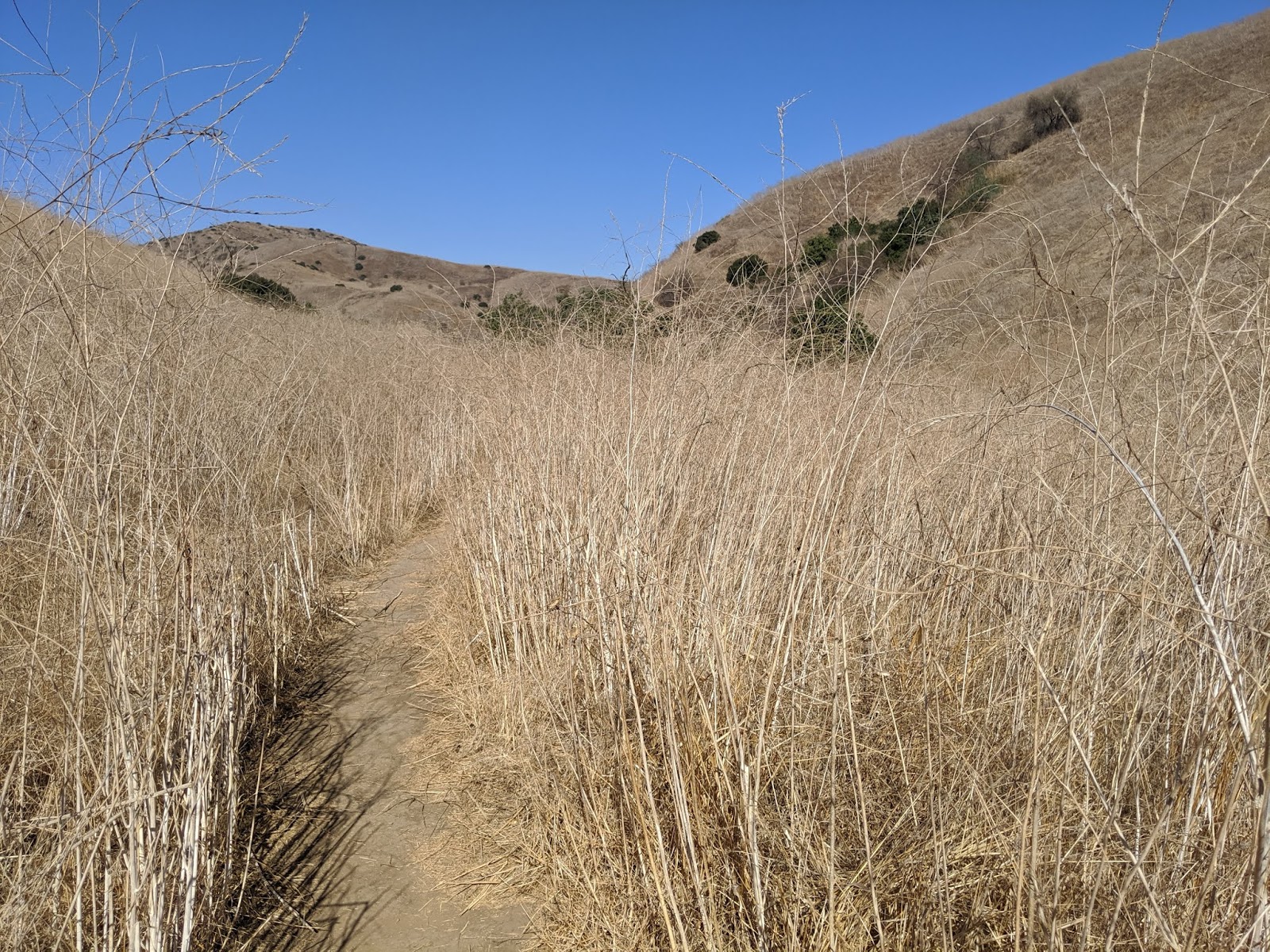