How Can Our Reservoirs Still Be Catching Up To Historical Levels?

ADDED LATER: the first half of March was wet. From 2/18 to 3/25 California's major reservoirs caught up against historical average, from 60.6% of to 83.3%. But we're probably done for the year now.

A lot of people have become quite nervous about this El Niño. 2014-15 started off strong with a soaking December, and then on New Years last year it just died. I was starting to worry that this "strongest El Niño ever" had suffered the same fate, with clear 80 degree days and the related return of nasty winter weather to the rest of the country. And with a warm and dry first 2.5 weeks of February, it'll take more than a these couple spritzes to convince us that this El Niño is not dying. 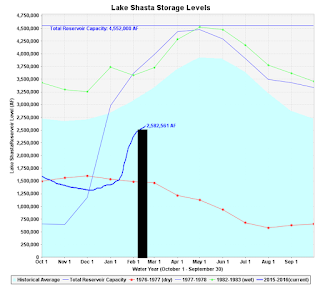 Lake Shasta, our biggest reservoir, for the 2016 water year. Thick blue line is the current year, other lines are other wet or dry years for comparison. Black box is the rainless period. As you can see even during this rainless period it was still catching up to average (the top of the light blue shaded area), but still has a long way to go. From water.ca.gov.

While this is a relief, it seems strange. How can we still be catching up if it's not raining? Let's assume that Sacramento's rainfall is representative of the state as a whole (which it may not be). Right at the end of the period 2/5-2/17 (the dry period between when I last checked, and the most recent data) Sac got 0.47" of rain (this storm). Normally Sac gets 4.25" of rain in the month of February. Since I don't have access to daily rain averages for the calendar year, I'll assume that the rate of rain is equal across February. Therefore, an average of 4.25" of rain during an average February of 28.25 days gives us 1.8" of rain in the period 2/5-2/17, if this period had conformed to average rainfall. But we didn't get 1.8", we got 0.47", which is only 26% of what we should have received.

So despite getting only 26% of the average rain, our reservoirs continued catching up, getting 2.5% closer to historical averages as mentioned above.

To my amateur water-resource-planning way of thinking, it seems that the explanation must be some combination of
a) my assumptions are wrong, and many other parts of the state have continued getting above average precipitation;
b) they're minimizing release - i.e., not releasing much water from the reservoirs relative to normal years so the flow into the reservoirs is lower than average, but the flow out is even lower than that;
c) delayed effect - rain doesn't immediately teleport downhill (and snow doesn't melt right away) and it takes a while for the drainage basins to empty into the reservoirs; or
d) the state's numbers are wrong.

If you are a meteorologist, civil engineer, or other professional type who knows about this stuff and knows the answer, I'd love to hear from you!

In the meantime, here's hoping for a wet spring, and that people conserving. We're still not even at 2/3 normal for this time of year. Mark Twain observed that everyone complains about the weather but no one does anything about it; if he were living in California 150 years later, I hope he would see us proving him wrong.
Posted by Michael Caton at 2/18/2016 06:17:00 PM 3 comments:

Neah Bay certainly felt extremely northwesty, with a backdrop of dense pine forest, gray overcast over gray waves stretching to the horizon in front of me, and (no joke) a centuries-old Native American annual canoe race the day I was there. Miami feels southeasty in terms of climate and landforms but culturally it's a combination of Northeastern in-migrants and Latin Americans with nary a Southern accent or antebellum attitude to be found. Point Conception doesn't feel very much like the Southwest in terms of the American conception of cactus and mesas and Wile E. Coyote landscape; in fact this is where the northern and southern currents along the CA coast meet, producing dangerous whirlpool currents, and there's usually a pretty stiff wind meeting the cliffs there to give the (wet-suited) surfers their nice sets, even when it's sunny. Oddly, although I hail from the Northeast, the only one I've never been to (probably like many Northeasterners) is Grand Isle, Maine. This doesn't count Alaska and Hawaii of course. Because they don't count, because they're dumb. I am likely at high risk for being one of those weird people who goes to integer latitude-longitude intersections (the closest one to me, 38N and 122 W, is on Willow Pass Road just outside Concord) but that could never happen to me man!
Posted by Michael Caton at 2/07/2016 07:17:00 PM No comments:

Find their blog here. I did a very modified version of the Ridge Trail in my own run around the Bay (which I then connected to the Western States Trail in the Sierras). I ran across this through the Ridge Trail Council's Facebook page. Always good to see other folks who share an obsession with long trail projects, although I'm frankly a little jealous that their blog will be prettier than mine owing to their mad art skillz (see below? It's the absolute essence of a wet winter day in the East Bay Hills.) Have a blast guys! 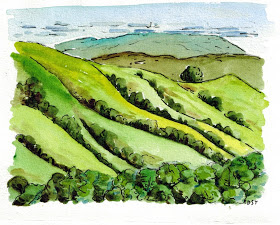 Where People Run in Various Places

Images below compiled from actual running data for San Francisco, LA and Philly resp.; but nothing beats the global Strava database, which is TOTALLAY SWAYT. 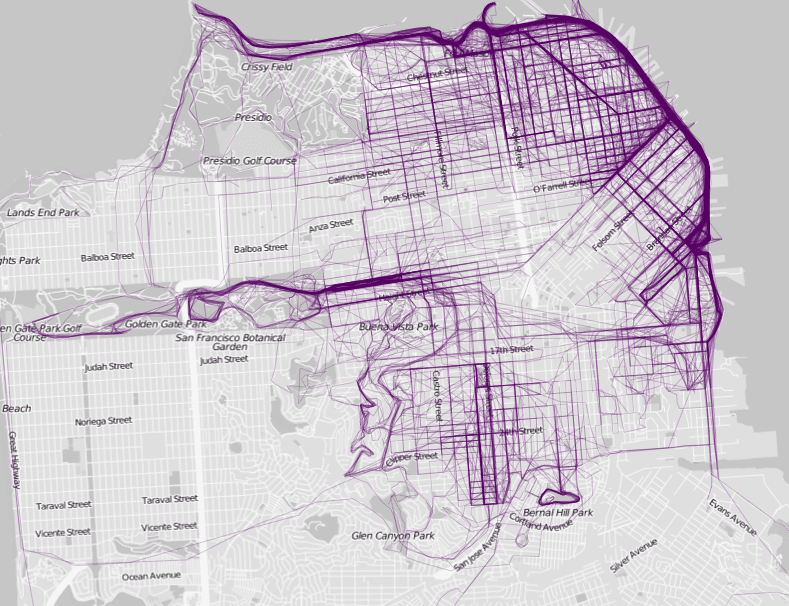 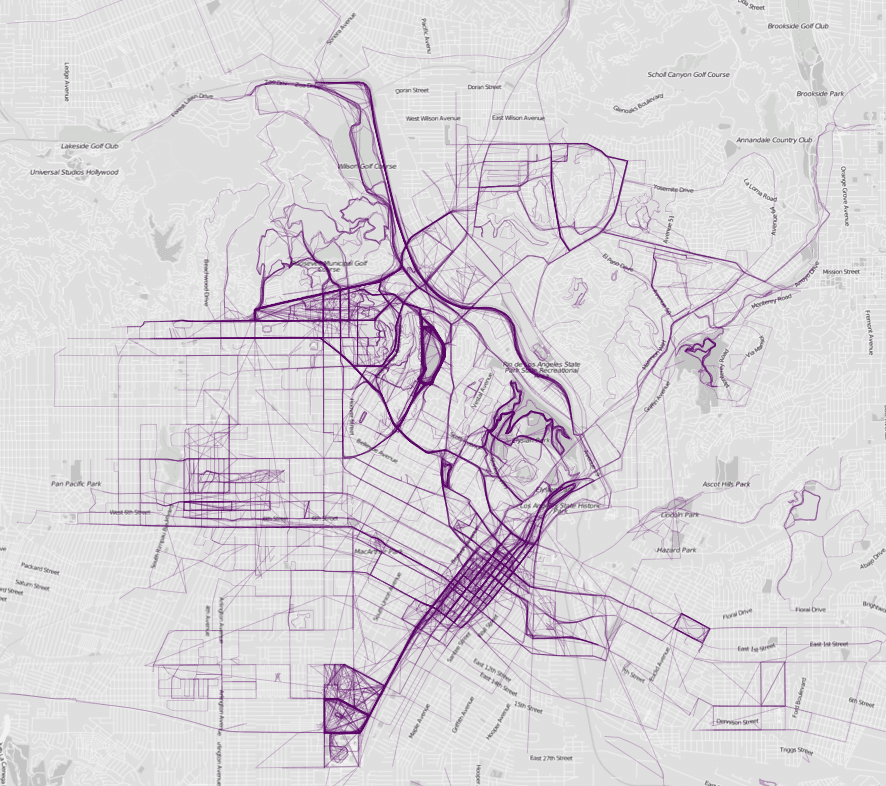 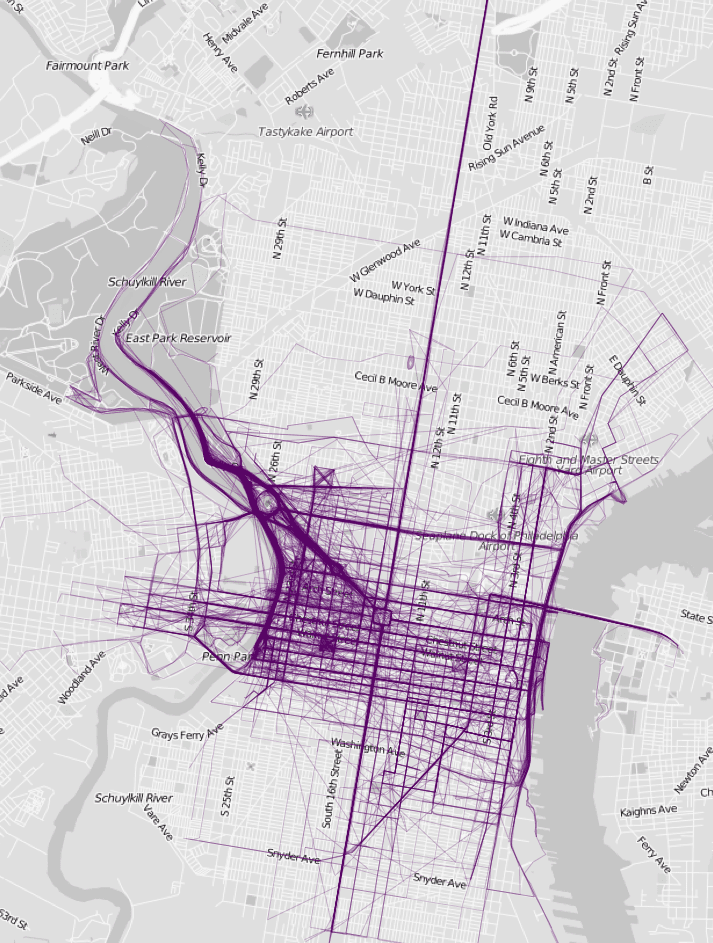