Next Time You're Out On Trail

...thank the park officers and law enforcement personnel and volunteers that keep these places safe. A Utah State Park Ranger is in critical condition after having been shot near Moab, and they're now looking for the shooter. In fact, this event is newsworthy precisely because of the efforts of park rangers and law enforcement. In most of the world you can't go out into the woods or the wilds without taking your life in your hands.
Posted by Michael Caton at 11/20/2010 06:16:00 AM No comments:


Recently I was thinking that I should put some actual, you know, running stuff on here sometimes, so it doesn't seem like some kind of a leftist hippie blog. So, just for you, today I went for a nice run in the nicer-than-I-expected Sycamore Canyon. I'm not exactly burning up the miles on this project but hey! I'm busy! So sue me! 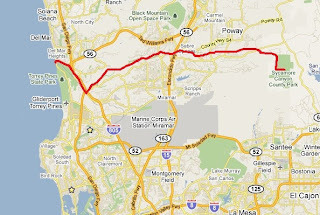 Thanks to the Sea to Sea Trail people for their continued work to make the trail a reality. I haven't been 100% religious about sticking to the (as yet not-fully-finished) trail as indicated on the maps they've kindly put together, mostly because bush-whacking-running in the desert is a good way to get bitten by various members of genus Crotalus, a healthy but irritable 2.5' long member of which I met just a few hours ago, stretched out and sunning itself near the Sycamore Canyon Road trailhead. It wouldn't rattle at me but it hissed a lot. It was a southern Pacific, based on this photo (credit Gary Valle):

What's funny is I just did an image search for southern Pacific rattlesnake, and the best image on the first page was from Gary Valle's awesome blog, which I already have in the links at the right. See, those are high quality links I put over there. And who do I do it all for? You, that's who. Now you kids run along or I'll tell your father what you've been up to.
Posted by Michael Caton at 11/14/2010 03:55:00 PM 1 comment:

Noyo River Redwoods Will Be Cut Down April 1st

...unless you do something to help stop it. See what the Save the Redwoods League is doing at their website, and save places like this.

Come Down to the W on Saturday Night

This Saturday night the 13th, come down to the W - have a few drinks and support a good cause.

Any Body Can Youth Foundation takes at-risk kids from south San Diego and teaches them confidence and discipline through boxing. Recognize the name Archie Moore, the legendary boxer? He started this organization and his son is continuing it. They need tutors! They also need donations. If you can help with your time or dollars (no matter how modest) you would make a big difference.

- There's a neat little back trail where you can drop down into Tecolote Canyon directly from USD. Many trail types probably already know this, but it took me over a year to figure it out. Started off a fun little run back up to UTC in the canyon there.

- My progress on the Pacific-to-Salton Sea trail has been stalled out. Hopefully I can knock two decent chunks off this weekend once we're out of this Santa Ana B.S.

- Prop 21 didn't pass - no support for state parks. Response from the parks and summary at Northern California Hiking Trails. Nature is a big reason people like living in California so it's disappointing that when there's an opportunity to protect that, people don't spring for it.

- SANDAG has recommended allocating real money, $2.6 billion, to improving bicycle and pedestrian infrastructure. Now the city governments have to agree. Call your mayors and representatives! More information (including their contact info) here.

- Dry winter more certain. By late summer some of the weather models were already predicting a La Niña pattern, meaning a dry winter, especially in the second half. Want to go see waterfalls? Do it by Christmas.

- Has anyone noticed that the local coyotes have been hanging out in Rose Canyon a lot more the past couple weeks?
Posted by Michael Caton at 11/05/2010 07:08:00 PM No comments:

Bleg for Locals: Is There ANY Way Up the East Side of Mt. Soledad?

You see there? That little side road (Gilman Court) just barely west of I-5 that splits off just north of the Gilman/La Jolla Colony on-ramp? I just noticed it tonight on the satellite images on Google Maps so after I voted I ran over there and up onto the hill I went. I was happy to have found it because I thought it would give me the "Northwest Passage" from Rose Canyon up the east side of Soledad which I have long sought, with pluck and dash like explorers in days of yore. It's a nice little traily-trail to know about, but the La Jolla Northwest Passage it ain't.

So is there a way up that doesn't involve:

b) doing a 16 mile loop down to PB and back up to UCSD (fair enough if you have the time), or

c) running across La Jolla Parkway, if that's even possible (which is what stopped me tonight)

The reason I won't let this go is that people have told me there is a way. In particular the taciturn aboriginals of La Jolla have repeatedly hinted that there is indeed such a passage, but I have found only scant evidence - a glance over a campfire, pregnant with meaning; or, tantalizing clues on fragments of wizened pages from dark tomes filled with the incoherent scrawlings of madmen in languages long dead. Or the rantings of oracles, eyes wide and gripped with fevered dreams.

Sorry, I used to play Dungeons and Dragons. But I really do want to know if anyone knows a good way up the east side of Soledad from Rose Canyon. Thanks in advance. Now I have to go polish my +5 Sword of Reckoning.

One of the aforementioned wizened pages, putative translation "Yea, forthwith there be a Subway at La Jolla Shores and Torrey Pines, but find ye the true path to Soledad in the heart of oneness." Okay really it's Tocharian, an extinct Indo-European language of Western China. Image from Salon. Kind of funny how ancient languages always translate into archaic English. I guess that's how you know they're ancient. What's wrong with me that I'm putting this here.
Posted by Michael Caton at 11/02/2010 08:05:00 PM No comments:

So I'm a little late to the party on this one. I was studying the propositions and candidates prior to heading to the polls and ran across Prop 21. For $18 a year, you can support the state's constantly cash-strapped park system AND (most importantly) park for free! Got that? No more $10 for Torrey Pines beach! No more parking a mile from the trailhead and walking along a busy road because you don't want to pay! For most of the people who read outdoors blogs that's a no-brainer because it pays for itself in a single year.

For what it's worth, I'm a registered Republican, and this is the ONLY time on this ballot or in memory for that matter that I'm voting for a tax or fee increase.