Happy holidays! In case you needed reminding, a weekend in SLO is never wasted at any time of year. And I guess this is where I tell you I'm quitting blogging since I successfully auditioned for Jackass. On the way up there from San Diego, for the heck of it first we stopped at Wee Man's Chronic Tacos in Redondo, and lo and behold the man himself was there: 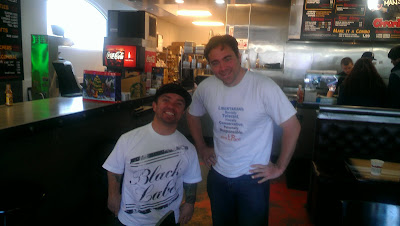 (No word on what my first stunt will be.) Then right north of Santa Barbara on 101, at the U.S. 1 exit, we stopped in the little lot east of the highway and meandered the half-mile or so up to the hot spring. It's a nice little stop if you're taking 101 to San Francisco. (Many mini-hikes was the theme of the trip.) 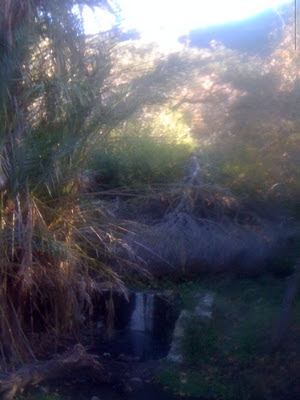 After that we checked out La Purisima Mission outside Lompoc (pictures below not mine) and then visited the southern end of the Pismo San Dunes at Oso Flaco before getting to SLO. 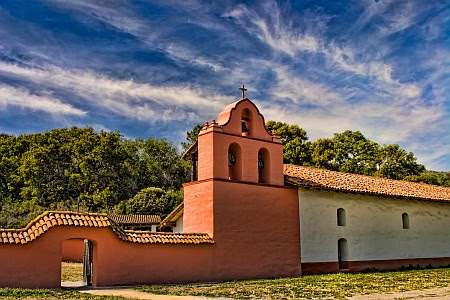 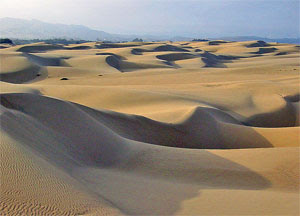 Seeing frost on the grass Sunday morning, we headed up to Missions San Miguel and San Antonio, before taking the beautiful and precipitous Nacimiento-Fergusson Road up and over the spine of the Santa Lucias. Here's your loyal blogger on Mill Creek trail, low on the ocean-facing slope of the Santa Lucias in the southernmost part of Ventana Wilderness. 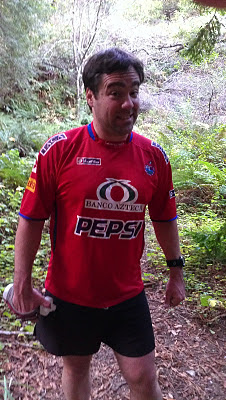 Picture above mine (duh). Picture below not. The southern part of Ventana is where the very southernmost stand of redwoods is, which continue to recover from the fire a couple years ago. (We never found the campsite, the trail just petered out, as the folks who made this trail report said.) Finishing the hike ahead of schedule at least gave us extra time to see a typical spectacular sunset along Route 1. 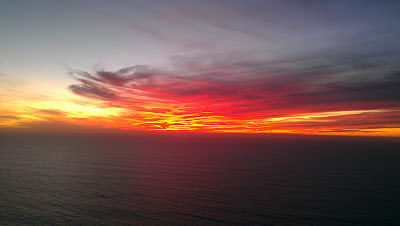 We wanted some tacos by the time we got back down to Morro Bay, and tried to go to Taco Temple, which was closed for some reason. Apparently it was Christmas Day. This theme was continued in downtown SLO. Then again, one of the benefits of being in your late 30s is you no longer panic if it's a Saturday night and the dearth of entertainment options forces you to actually relax with people you like!

The next morning we screwed around on the dunes too long so we had to skip going to Big Falls (next time!) - although Chiquito Falls in Trabuco (Cleveland NF) was dry just a couple weeks ago, and we've had no rain since then, so maybe we didn't miss anything. Seeing as a certain anthropologist was too cool to be home when we were visiting, we headed first to the Coronado Butterly Preserve, where monarchs spend the winter (image not mine):

After that we went up and over the mountains behind Santa Barbara to the Santa Ynez river canyon. NOTE: Gibraltar Road is CLOSED, apparently always the case at this time of year. I like driving over those concrete things to go through the river so I was a little disappointed, not to mention that the Red Rock area is pretty cool. But still, the Oso campgrounds aren't bad either. 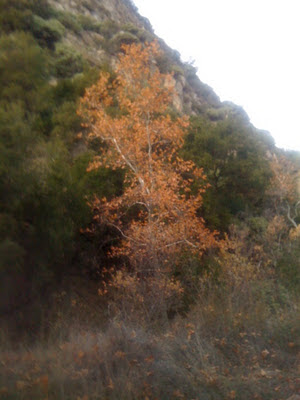 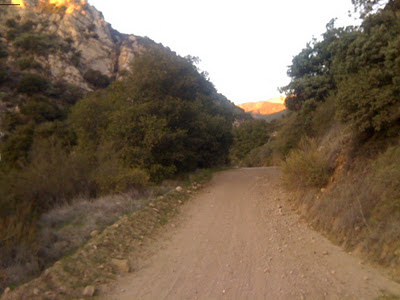 We finished off with a visit to Painted Cave before continuing south for some good Chinese food in Irvine. My only regret: I still haven't figured out a way to bottle the smell of Central Coast oak forest.
Posted by Michael Caton at 12/27/2011 05:46:00 PM No comments:

Via Boing Boing, Check out this color film of a 1955 San Francisco (thank you filmmaker Tullio Pellegrini.) It's long, so here are the highlights of that differences from 1955 to 2011 that jumped out at me:

There are some. What do you know! No I didn't see any, but i was just doing some research to see if there are any in the Ventana or Santa Lucia Wilderness, and according to DFG there are. They're mostly in the mountains, but hey, this could still happen. From the Nine Commandments.

You SoCal outdoorspeople might be chuckling to yourself that I'm surprised by this, but what can I say. When I first looked at this map I thought the CA Department of Fish and Game's map, which I thought was being overenthusiastic - for example, they have all of Marin County as bear territory, and to my knowledge there was has been one unconfirmed bear sighting in Point Reyes in recent history.

But here are sightings, tree-ings and cooler break-ins (including Julian and Ramona) through 2000.

At Grantland there's a great article than answers why a system so unfair and unpopular as the BCS rankings persists, written by Kevin Grier and Tyler Cowen (you may recognize that last name from columns in the New York Times). Why economists? Because the answer is money, that's why. To be clear, this isn't a screed against college football - it's a screed against people who think the current system has been picking the best teams. Chances are your own team has been screwed by this, which led me to do this analysis of pre- vs. post-season rankings.

One heading in the Grantland article is "Bowls often take money over merit when making match-ups". It links to an August piece by political and athletic oddsmaker Nate Silver, who shows that part of the reason for such an opaque system is that vested economic interests want their bowls to host teams whose fans buy tickets and T-shirts, even if those teams suck. There are plenty of objective figures to consider. BCS stupidity exposed here; BCS hijinx here.

[Added later: I spent way too much time making scatterplots out of BCS data compared against the annual undergrad college rankings from U.S. News during the 2006-2010 period. Guess what? There is zero relationship, either with the rankings, the academic scoring system, or the trends over time; that is to say, football doesn't help or hurt the academic rankings, but still, it seems kind of strange that an athletic team gets to use the brand of an academic institution that they seem to have zero influence on.]

Of course the Onion is not to be left out of the fun either:; this is just fantastic.

Mini-Profile of Jenn Shelton from Born to Run

If you read Christopher McDougall's Born to Run about the Tarahumara, you'll remember Jenn Shelton as the party girl. That's an image she's trying to shake. I read elsewhere that she complained that McDougall's book romanticizes the lifestyle of the Tarahumara, which is in large part dictated by poverty. That doesn't sound like a party-girl thing to say. Profile here, which struck me because even top-notch ultra-runners are afraid of mountain lions.
Posted by Michael Caton at 12/16/2011 11:56:00 AM No comments:

Southwest Indians are supposed to have eaten chia seeds on long runs when they started to get tired, and in Born to Run Christopher McDougall discusses the chia smoothies used by the Tarahumara of Chihuahua for the same reason. Yes, chia, the seeds for the stuff that grows on chia pets.

It pays to be skeptical of these claims (and the great blog Science of Running can help you with that). People always want a magic fix for things like this, and unfortunately most of it is nonsense being peddled by a profit motive - though there's nothing wrong with profit, unless you're B.S.-ing people about your product. And I wanted to try it out, so I decided to do a small and admittedly poorly-controlled study: I carried chia seeds with me, and started eating them an hour into my run. I did this five times, in flat to slightly-hilly runs, at temperatures ranging from 55 to 65 F. I could feel no difference in fatigue versus previous runs under the same conditions, and my times on the same routes were the same.

If you want more, then read this paper in the Journal of Strength and Conditioning Research, which reported that chia seeds showed no statistical advantage over any other form of carb loading.
Posted by Michael Caton at 12/14/2011 03:34:00 PM 2 comments:

The cold weather in SoCal recently has been fantastic for running; also for scenery. I took these purty pitchers at Mt. Laguna, about an hour east of San Diego yesterday: 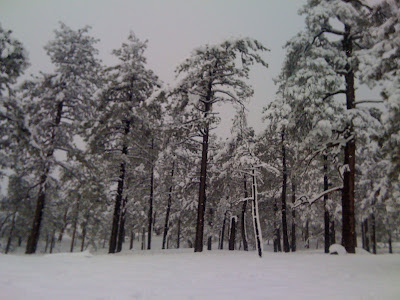 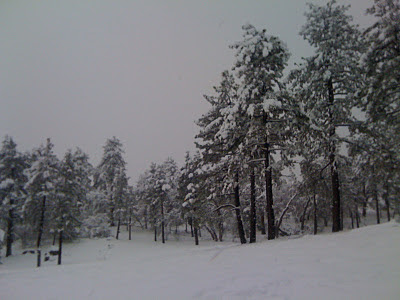 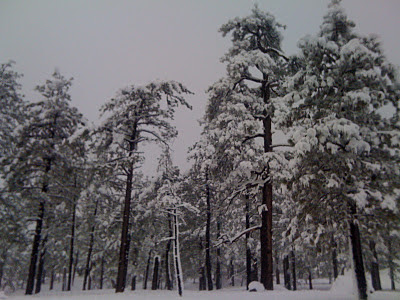 And here's a charming acquaintance of mine who came to visit from NorCal for some surfing, sun and warm weather in San Diego. He's clearly thrilled. 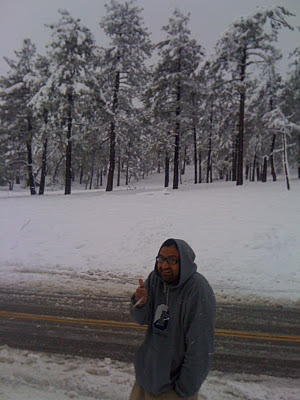 A Win-Win-Win Scenario: Do Away With the BCS Rankings

An article by Richard Thaler. Mathematic evidence of the sheer stupidity of BCS rankings here.
Posted by Michael Caton at 12/14/2011 03:09:00 PM No comments:

How Many Miles per Gallon Do You Get Running?

UCSD physics professor Tom Murphy does something I was always curious about and calculates the MPG conversions for walking and biking. The conversion is based on the energy density of gasoline burned in cars vs. food energy burned in muscle. "Long-haul" walking comes in at 40 MPG eating regular food; running will be less efficient than that. A Prius is more efficient in energy terms than a runner.

Note that of course this doesn't measure climate impact or dollars per unit energy. Murphy also points out that those kcal you're eating could either be trucked in from all over the place (burning more gas) or be grown closer to home.
Posted by Michael Caton at 12/05/2011 01:38:00 AM No comments: