Since there's more kayaking than trail running in California these days, AND as the premier blog for outdoor activities in California and Berks County Pennsylvania, I'd just like to draw attention to the following articles, whether or not the amount of Pennsylvania content is disturbing Jeremy.

Above:  view of the Schuykill from Neversink, from Berks Nature.  Below, French Creek near Hopewell Village, by Mike Roush at Berks Awhile.  Below that, the pedestrian bridge near RACC from my Schuylkill River Trail run in December. 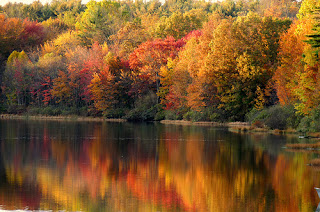 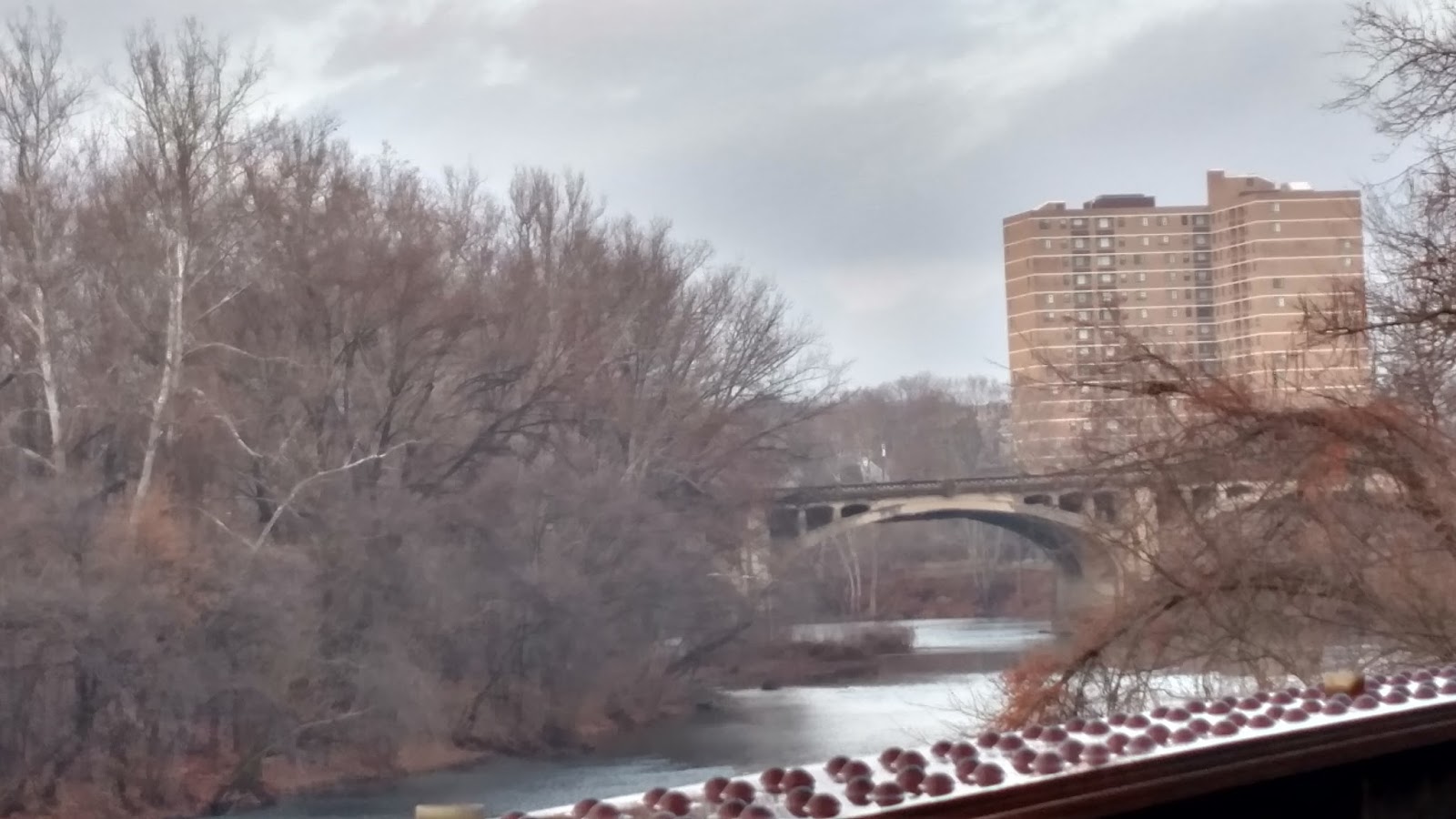 Cross-posted to The Late Enlightenment.

A friend of mine had lived in Philadelphia and Atlanta, and then moved to Olympia, Washington. She immediately fell in love with the place. She noticed - or thought she noticed - two things: that people there were really outdoorsy, and that they weren't concerned with the silly oneupmanship status games that she witnessed constantly back East.

That was before she witnessed, at a party of grown-ups, two people arguing over who had the lower REI co-op number, and therefore who was the more genuine outdoorsy person.

I've had similar experiences in Moab and Banff, both of which towns I despise. I mean, really stomach-turningly hate, like a pagan hates the squat stone gods of an enemy tribe. I love where these towns are. Of course I love the Canyonlands and slickrock trails and rock mazes, and the Canadian Rockies and meadows. But I hate the people that congeal in these towns. Not all of them of course. But there are many people who just really need you to know how active and outdoorsy they are, by their branded gear, by the conversations they steer you into...exactly the sort of nonsense we go outside to avoid! (And, full disclosure, maybe I despise it so much because I catch myself doing it.) Let's not leave out Rainier Mountaineering Incorporated. Are they still around? I ran into one of their guides in Mexico once. He wasn't nearly as revolting as I expected he would be. (But still pretty bad.) The Red Rock Casino in Vegas on the other hand is much more open in using the name and theme and proximity to the canyons on the west side of the strip as their particular mechanism to part outdoorsy folks from money. There's an honesty in that which I very much appreciate.

Here we take a time out for a little exploration of the bizarre psychology on display among your fellow humans. And exhibit A in such a discussion is always the very fact that it can even seem bizarre: if you're human, and you spend by far the most time interacting with other humans versus other species, shouldn't understanding and acceptance of our cognition and behavior be automatic? The fact that it can even seem bizarre is bizarre!

Of course if you went to Moab for a race or some other competition, that's a little different. You can't run a marathon and complain that everybody was just trying to win, because the race is explicitly and only a zero-sum status game (even if your goal is a PR). Along these lines, I had another friend in college who would play video games with us in college and criticize us for trying to rack up points instead of exploring the world inside the game. "Points! Points for MDK10!" he would cry with contempt. To which the rest of us offered "It's a game you moron!" (He was, and still is, in fact ,a moron.)

But the reason that Moab and Banff (and maybe even Taos) can feel so strangely claustrophobic and annoying is that we go out into the wild blue beyond to get away from this nonsense, but by the very fact of people with these interests and personality compositions being concentrated in one place, the games we all play when we socialize become all the more annoying and ridiculous. What my naive friend learned that day is that humans will make anything into a status game, even outdoorsiness, as is clearly the case in outdoorsy towns. While life certainly does have zero-sum games, it also has a lot of games which are not. But status games, relying on relative position as they do, are necessarily zero sum. You can't become first in any order without displacing the person who's already there. Have you ever noticed how perspicacious people seem to avoid status games? My bet it's because these folks wisely learn to minimize competing and zero-sum games to the extent possible, status-oriented or otherwise. And like it or not, if you spend a lot of time doing outdoor activities, unless you hide those activities, it's likely an important part of your identity, so on some level you're using that to signal qualities about yourself, and to protect our identity we have to puff up our fur in a kind of implied social threat display. (Yet another friend of mine wanted to cloak himself in a featureless black sphere, a social event horizon that permitted no information to escape from him - but he soon realized even this would be in vain, as lookers-on would inevitably start commenting on what he was trying to say with such a dramatic choice, and anyway a guy I know has a much better event horizon.)

Instead of wearing branded gear, signaling by having a blog would be much better. More cultured. It would tell you, if you were a sophisticated observer, that the person is not only outdoorsy but also a man of letters, perhaps even with some ironic capacity for self-reflection.
Posted by Michael Caton at 2/01/2017 08:04:00 PM No comments:

Previously: Huong Lan and Duc Huong Sandwiches, which were much better in that they were open when they said they'd be, and you could buy food from them

In my continuing and very staggered effort to eat at all the restaurants near 65th and Stockton, starting with all the banh mi shops, I went to Long Sandwiches. They DID disappoint. 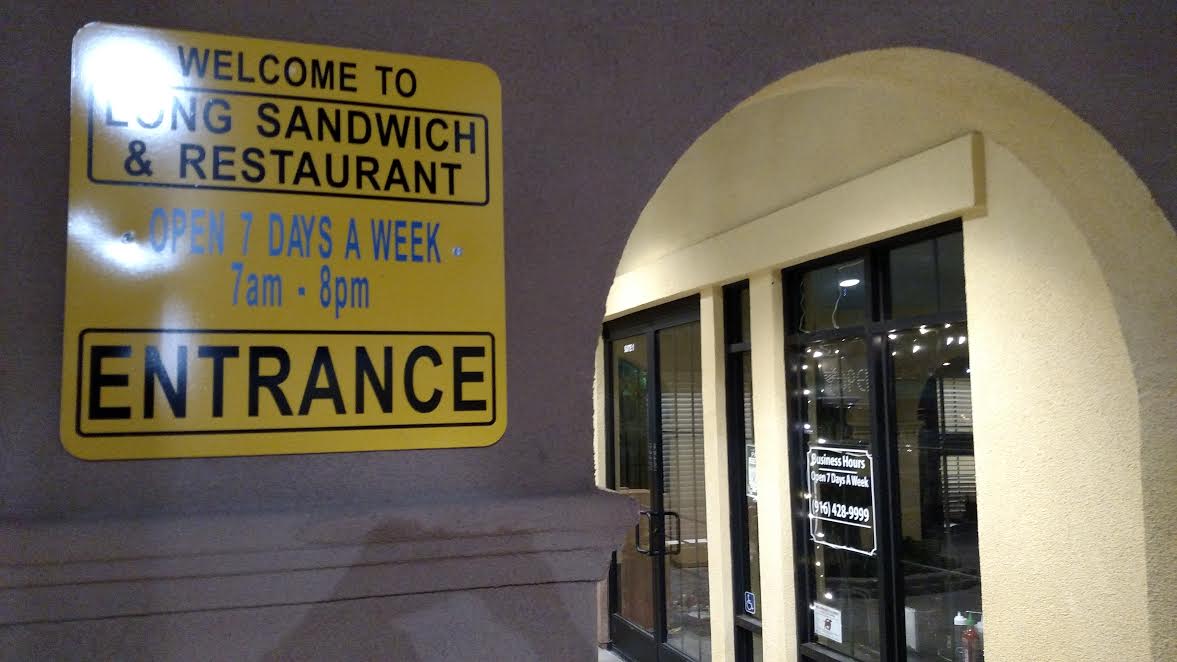 If you go there, this might be the closest you get to a sandwich. It was 7:33pm when I took this picture ("'OPEN' 7 days a week 7am-8pm") and you can see the closed restaurant behind the sign. Go to Huong Lan instead, which is open when it says it will be (and is where I ended up getting my sandwiches. Excellent as always.) One of my pet peeves: we're all busy, so when we make a point of trying somewhere new, and they're not open when they say they'll be open, that's a cardinal sin. Zero stars.
Posted by Michael Caton at 2/01/2017 02:26:00 PM No comments: