I'm very fortunate to have home-bases for the moment in both San Francisco and San Diego, so dear reader, you'll be seeing links from up and down the coast of the whole great state of California.


1) With the warm dry winter, French broom is already in full bloom along Route 13 in the East Bay area - but completely absent from Redwood Preserve, as far as I can tell, due to a concerted effort by volunteers over the past few years. Good job! A few years it looked like it had completely taken over.

2) Oil platforms off Venture and Santa Barbara Coast to be re-opened, if this already-passed House bill becomes law.

From Scott's Los Penasquitos post. It looks hot. You can smell the dust and sage in this picture.

4) There are albino redwoods in several places around the state, like the one e Mark at Tales from the Trails found below. Of course it's not true albinism in the sense of vertebrates, but rather a lack of chloroplasts, which in turn means they can't photosynthesize; but since redwoods often share root systems, they can get away with it (not surprising in retrospect that redwoods do this but still cool. Clonally reproducing organisms like redwoods often share resources since it's identical genes cooperating with themselves.) I'm going to be heading down to Henry Cowell State Park tomorrow to check some out and go for a nice Santa Cruz Mountains run. 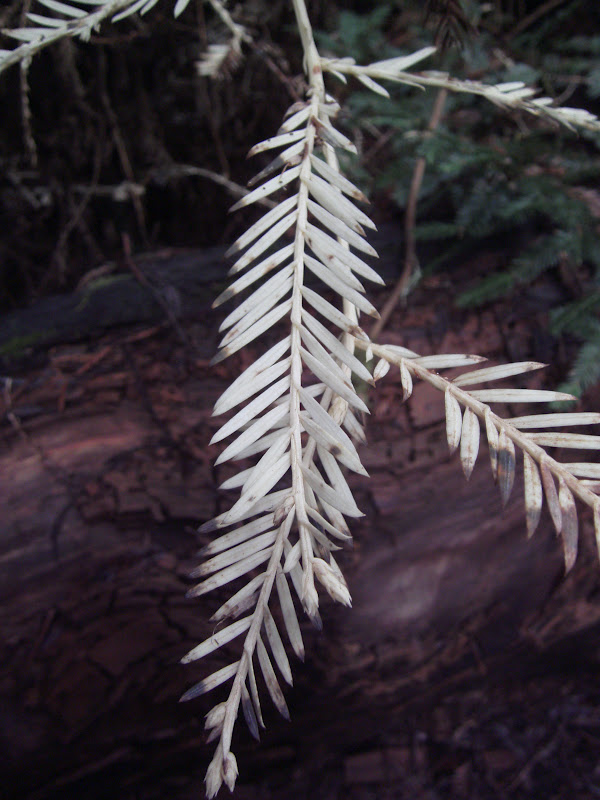 From Mark's Tales from the Trails

5) If you're in the East Bay and want a fun Wednesday night trail running group, the WEENIES is a good one. (Wednesday Evenings East Neighborhoods International Exercise Society.) Last week we were up on the deer and fire trails in Tilden and above Strawberry Canyon, and in the dark we startled a deer that almost bulldozed us as it was running.

6) For hashers: thinly concealed heresy on the San Francisco Hash House Harriers website! And needless to say, right before I moved up here I just started really enjoying the North County Hash in San Diego (they did an Elfin Forest run a while back that was fantastic) but the East Bay ruffians are a good time too.

7) Finally - I'm going to post something I'm doing on the awesome site nobodyhikesinla. Hopefully it will make it even more helpful for people who like SoCal trails!

The Bay Ridge Trail in EBMUD land south of Tilden Park, Oakland. David Sanger Photography.
Posted by Michael Caton at 2/19/2012 11:15:00 AM No comments:

The Seattle Sonics Moved; What Happened Then?

If you're interested in sports meta-issues, here's another question: does it really matter, ratings-wise, which teams are in the World Series or Super Bowl?

In 2008 the Seattle SuperSonics professional basketball team moved to Oklahoma City and became the Thunder. The reason, more or less, was the stadium: newer stadiums have more ways to part fans with money (i.e., space for selling expensive food and beer, plus branded merchandise), which is why professional sports organizations' demands to the cities they're in usually revolve around getting new stadiums. To do this they often demand (and get) tax money; a pretty ballsy demand from a private organization. The way the teams get their way with government is their unstated threat that, if they leave, there will be backlash from fans against the mayor and other government officials for the loss of jobs from the area where the team played, as well as the emotional impact of losing the franchise.

That's the fear the team ownerships play off anyway. So when the Supersonics left Seattle, what happened?

There's a whole documentary about this, Sonicsgate: Requiem for a Team, embedded below. First, there was a referendum passed that essentially disallowed any taxpayer supported stadium* with 70% voter approval. That wide of a margin is amazing in itself; and in fact around the country any time these kinds of discussions have happened in the open, taxpayer opinion has been similarly negative. And this makes sense, because it's been proven, by economists, in impartial peer-reviewed journals, that sports stadiums do not help their local economies. Of course, they do help the franchise owners, but it's not taxpayers' job or desire to line the owners' pockets. Literature fans will recognize writer Sherman Alexie in the documentary but his and others' argument that capitalism always ends up redistributing taxpayer dollars to the wealthy is transparently irrelevant ("but everybody else does it!"); most taxpayers don't mind as much if that wealthy person is going to be creating jobs, and again: professional sports arenas do not create jobs.

So when cities do cave in to professional sports groups and give them our tax money, why? Are they just delusional about the job-creation prospects? Or is there backroom corruption? That's possible of course, but what's certain is that voters react irrationally when things happen to their favorite teams and players (remember LeBron James leaving Cleveland? Holy sheesh). In this case, Mayor Greg Nickels was defeated seeking a third term, and this was at least partly blamed on the Sonics' leaving. You can imagine the NBA distributing a copy of the story of Nickels' unsuccessful run directly to the mayors' offices of every NBA-hosting city in the U.S. The Supersonics weren't even that popular as sports franchises go.

So what's the point of all this? Lots of us, sports fans and otherwise, recognize that it's not the taxpayers' jobs to keep the Chargers or Niners or whoever in our town. When a local team tries to shake us down for a new stadium - and it's when, and not if - that's when the taxpayers (and the mayor as our representative) have to send a clear signal not to let the door hit them in the ass on the way out. We have to remember that the sports teams are private organizations that are playing hardball with our cities trying to make money, and when they leave, it's to make more money, and they don't care that they're going to ruin childhoods. And most importantly, we have to remember, when the next election rolls around, that the mayor stood up for our interest. Otherwise we can't complain when the mayor spends our tax money on facilities for private businesses that only enrich the owners, and not the rest of us.

*To be clear, what the referendum said was that any taxpayer investment had to produce positive returns, which is basically the same as disallowing it, and is certainly how the average voter thought about it.
Posted by Michael Caton at 2/07/2012 03:22:00 PM No comments:

The falls are still going even after this dry winter (although picture above is not current), and after tomorrow they'll be stronger. If you haven't yet done this hike, I recommend that you don't want to do it when it's rained recently because of slippery rock and dirt. Here's a Cro-Magnon we saw coming down the final little run the non-rope way. Didn't know there was a remnant population in the canyon. 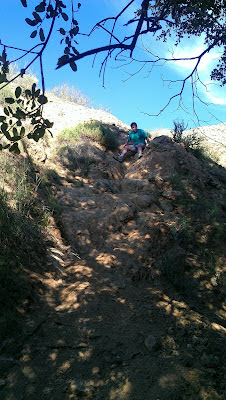 In fairness, Born to Run is about a lot more than barefoot running. But as a takedown of athletic and exercise cults in general this is pretty funny.

You can hear the thought process..."No snow in the Sierras, so what else can we do...wait, it's cold and we can get to the high lakes...hmmmm...." Talk about making lemonade - some genuine California ice skating. And the BEST PART: no soundtrack. When people watch nature videos, we want to hear, you know, water gurgling, wind, the scraping of ice and rocks...not annoying Euro-pop. This video is pretty much perfect. Thanks to the folks who made it and thanks to Mark at Marks Tales from the Trails for posting it on his awesome blog.