Land of Dead Trees: Why Won't California Protect Its Forests?

[I wrote this a week and a half before the Napa-Sonoma wildfires. That's not national forest, but I don't know why we think the same thing won't be happening to the rest of California's forests in the near future.]

The excellent and sad map below is from a great article about where the dead trees are in the Sierras, and the associated fire risk. Assuming that dead tree counting has been consistent for the past 4 years, this article also has data showing that the trees lasted the first 3-4 years of the drought, and all the winter of 2016-17 did was erode the soil around dead trees, and grow grass for fire fuel, and fuel fires it did. Pretty soon the southern Sierras will look like the Grapevine. Even for people who aren't outdoorsy, did you notice the air quality this summer? A lot of the country was affected by smoke from western fires. Much wetter New Zealand outright forbids fires in its national parks. What's wrong with us in California that we aren't serious about preserving our remaining forests? 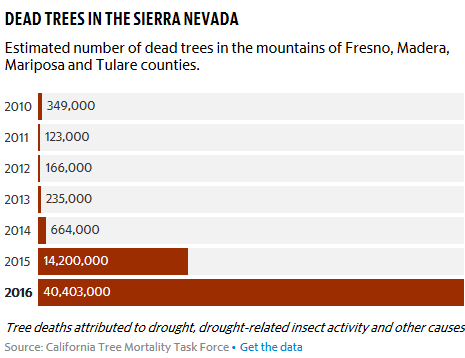 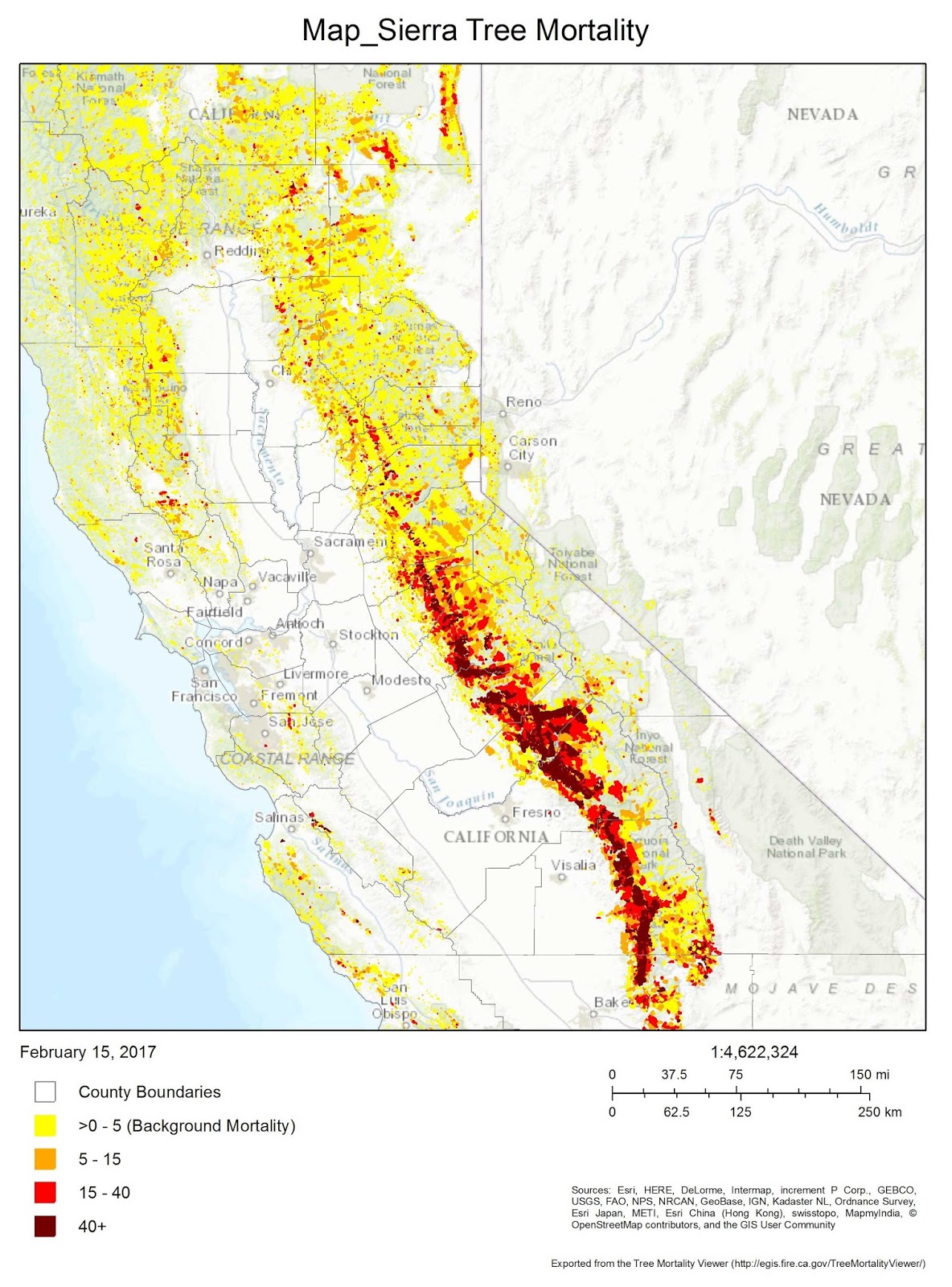 How to Ruin Your Time in the Mountains

I whined before about how outdoorsy types can turn being outdoorsy into a status game, but this is even worse:


"Right now, it has been exactly three years since my 2014 ascent of Mount Everest," she wrote. The status was accompanied by a photo of Wang half-squatting at the peak of the world's highest mountain, while two Sherpas help her unfurl the Chinese flag. In the background, the sun is setting behind the endless snowcapped summits of the Himalayas.

However, Wang's Everest ascent continues to stir up considerable controversy in mountaineering circles. The Sichuan-born entrepreneur didn't make the whole climb on foot; instead, she flew by helicopter from base camp, situated at 5,364 meters above sea level, to the second camp at 6,400 meters before actually beginning to climb.

I find myself feeling sorry for these people. More on how Chinese businesspeople are missing the point of mountaineering here.
Posted by Michael Caton at 9/24/2017 12:12:00 PM No comments:

[Added at the end of the season: this ended up being very fun, but not an effective way to test whether sheer team loyalty and knowledge versus general unbiased football knowledge are better for predicting game outcomes. The reason it wasn't a good test of this was that early on, my mother realized that her approach of "I like the Steelers so I will always predict that they win" was in conflict with her moral value of "I don't like losing money to my son". She therefore started asking me to tell her what the official spread was, and more or less based her prediction on that (so much for information-free statements about team loyalty when you're pinned down by a measureable statement with an actual consequence! Not that surprising.) But, that's where I also learned I had a conflict; namely, my moral values of "I don't like losing money to my mother" and "Don't lie to your mother" were in conflict, which I promptly solved by always lying to her about the spread so that I could win. Once she realized her son was the kind of terrible person who would lie to his mother for money (clearly because of his bad upbringing) she started looking the spread up on her own (who knew, your mother will use the internet to avoid losing bets!) So after 4-5 games her bets were mostly informed by the Vegas spread just as mine were, not really reflecting the accuracy of loyalty vs expert estimates. But most importantly, I still came out 2 games ahead.]

(If you're a math-minded sports fan much of this may seem like a Neanderthal re-discovering fire - if so, please don't hesitate to comment and point me to resources or critique errors in my thinking.)

This isn't really a team sports blog but occasionally there's some fun with statistics - for example, showing how the BCS Bowl System seeds high-earning teams into its bowls through its bullsh*t preseason rankings, or seeing if there's bias in predicting March Madness games among fans vs. impartial predictors. Now I have a new and exciting project: betting with my mom on Pittsburgh Steelers games.

I don't know that much about football and I certainly don't have loyalty to any team, but I like the statistics of it. And I really like taking money and pride away from the wonderful woman who brought me into this world. But I also want to see how the spread we settle on for our bets, differs from the Vegas line, and whether it does so systematically. (The only way I can swindle her is if she doesn't have the same information I do, i.e. doesn't know the Vegas line. I got her a smartphone with my own money, and if she would use the damn thing she could look it up herself. So unless my take is more than the price of the smartphone I'm not a bad son.)

Statistically, the point spread is the handicap needed for a 50:50 outcome. I've always been interested in the effect of team loyalty on predictions - so in other words, does my mom's loyalty to the Steelers make her think they are more favored than they really are? And of course, in a zero sum game, you want the other person to be irrational in deciding where the 50:50 cut off is. So far, our spreads have been 1.3 points more in the Steelers' favor than Vegas, and I'm 2-1, and it's a dollar a game so she owes me 3.5 zloty. (I only accept Polish currency.)

What I'll be looking for as the season progresses:

When I looked up the score for the game (why sit there and watch the game when you can just get the score at the end! Waste of time!) I ended up reading about this week's opponent, the Cleveland Browns. It's easy to develop a morbid fascination with bad, bad teams. The Browns are certainly that, and the franchise has been drowning in toilet water for a decade. Cleveland almost became a 0-16 team last year. I really can't say more about how bad the Browns are, and how much any affiliation with them will cause you to suffer (much like a sports fan's version of the puzzle box from Hellraiser) than this Deadspin article. But my favorite part of their last season is as follows. Trying to salvage some humor from the Browns' suckitude and passive-aggressively punish them, their fans had gone so far as to start raising money for an oh-and-16 parade. And guess what? After fourteen long, stupid, torturous games, on Christmas Eve 2016 the Browns narrowly defeated the San Diego Chargers. THAT is when they finally decided to get their act together, when it would ruin their fans' plans, and after it could not possibly matter anymore in terms of the playoffs, and (my favorite part) against a team that technically would no longer exist after the end of the season (the Chargers moved to LA after that season.) So not only was the win completely pointless, it robbed the fans of their one moment of levity. It was worse than worthless. I really like that.
Posted by Michael Caton at 9/10/2017 07:24:00 PM No comments: