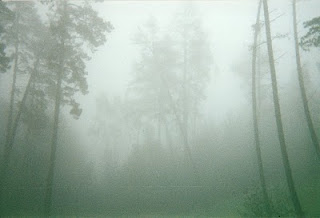 Quick hilly run on Matt Davis Trail, Mt. Tam. Started in the heat about 1,000' and descended into one of the densest marine layers I'd ever been in. The contrast was rapid. I stopped at the fog boundary to look at the sunlight slanting down through the forest canopy. The mist droplets were big enough that I held out my hand to watch them trace the air currents around my hand and eddy at the back. I got cold - couldn't have been more than 60 F down there - then climbed back up above the marine layer and was soon dying from the heat as I slogged back up the mountain. At the pullout where I'd parked a German tourist family was enjoying the view of the white washed-out world below and the hidden rushing ocean, with no idea how cold it was just a mile beyond the trailhead.
Posted by Michael Caton at 7/26/2009 02:55:00 PM 1 comment:

What's With the Trail Signage in CA State Parks

Disclaimer: I greatly enjoy California's state park system and I realize that it faces under-appreciated challenges, like for example that 50 parks will be closed as a result of the most recent state budget deal. That said - has anyone noticed that sometimes the signage and in particular the mileage is a little off? There are some markers at junctions around Castle Rock and the northern part of Big Basin that seem way off. If anyone has run back there with a GPS, I'd appreciate a yay or nay as to whether I'm right that the mileages are often way off.
Posted by Michael Caton at 7/25/2009 06:38:00 PM No comments:

Right on the border between the state park and the Mt. Diablo Foothills regional park is this awesome formation:

(credit to ParsecTraveller, whose photos are almost too good.)

I stumbled across it during the East Bay Hash's 30th anniversary, where I showed up two hours late (surprise) and running it all by my lonesome, got badly lost (surprise again). But I found this place, so it was worth it.
Posted by Michael Caton at 7/13/2009 11:28:00 PM No comments:

What's With The New Contra Costa Images on Google Maps

New Contra Costa County images. Go look. They appear 1) to have been taken during the winter, when the grass is green, thus decreasing contrast between grassland and forest, as well as decreasing visibility of topography, and 2) they appear somehow smoother or more artificial than the previous satellite photos.

What Do I Miss About Summer on the East Coast?

Real summer days at the beach. 89, humid, and you can't wait to jump into 78 degree water where there's surf (but no Maverick's waves), and no great whites.

Every other day: the pool. Laying on grass, listening to the same soft rock station play the same songs every day, and it's okay. Because a summer day where you don't swim is a day wasted.

Crab houses. Places where everybody is just fine with relaxing and being middle class and not worrying about the rest of the people in the restaurant, because frankly no one is even thinking about all that.

Real boardwalks, with well-behaved families and kids busting their asses selling french fries and pinball machines that look like they were there when your grandfather was chasing your grandmother (and guess what, they probably were).

Thunderstorms; the smell of the earth five minutes before the rain comes, and the sound of the first sheet of it approaching through woods so green they stain your retinas.

At night: frogs and katydids and lightning bugs.

And the strangely joyous urgency of having to get all this in within 14 short weeks, until the return of football and school and falling leaves.
Posted by Michael Caton at 7/13/2009 03:36:00 PM No comments:

I'm looking for trail events this fall in San Diego and SoCal in general, and not finding any nice centralized lists - TheSchedule.com seems to focus on NorCal events. Is this just because there are more NorCal events? Anyone know of any trail event resources for SoCal?
Posted by Michael Caton at 7/11/2009 09:04:00 AM 5 comments:

I'm putting together my fall race schedule and I'm populating it for the first time with races in the southern half of CA, since I'll be moving to San Diego in a couple months. I had met the person that used to organize the 9 trails race in Santa Barbara and it seemed like a cool race, so I'd wanted to do it. Want to see a scary picture? Go here and you'll see why yhis year's run will be in Montana de Oro instead.

Needless to say, I'll be disappointed not to be running in the Santa Barbara coast range (as I'm sure many people will) but it's more important to let the vegetation recover.
Posted by Michael Caton at 7/09/2009 05:16:00 PM No comments:

The Bermuda Triangle? No, The San Leandro Square


View Larger Map
A while ago I noticed this formation on satellite maps. Not only are they straight lines a mile on a side, they're oriented exactly with the cardinal directions. The lines are pretty clearly vegetation, but there's no mention of what it might be on the EBMUD trail map. So I ran back in there with the annotated trail map and a GPS. Those lines are rows eucalyptus trees - tall old ones - planted exactly aligned with the cardinal directions, which is not easy considering the rather robust relief of the land back there. Ramage Peak Trail goes right through it - from inside, if you weren't looking for it, you might not notice the straight lines of trees since it's pretty big. There is evidence of cattle terracing inside on both sides of the summer-dry creek bed running up the middle.

So what is this? It wouldn't keep cattle in because at their bases the trees aren't close enough together, and yes I know that often eucalyptus is planted as windbreaks, but then it would be one stand, right next to a house or field with fragile soil or crops. Any theories? Yes, I know I could just call EBMUD and they'd probably tell me but that would spoil the fun.
Posted by Michael Caton at 7/05/2009 03:21:00 PM 2 comments:

A few years ago - I think about 2003 and 2004? - some very kind souls were good enough to join me on a lark. That lark was running the approximate last leg of the Pony Express. On this leg, they unloaded the mail on the docks in Martinez and loaded it onto horses that would ride from there to what is now Jack London Square in Oakland, and then loaded the San Francisco mail back onto a boat would take it across the Bay.

The route we took wasn't quite exactly the same as the real one (that would involve running on freeways, which didn't exist at the time the Express was operating). We started at the train station in Martinez, headed south on Alhambra Valley Road, then up into Briones, southwest on Old Briones Road to the Bear Creek Road entrance, down Bear Creek, crossing San Pablo Dam Road and up through the Orinda hills to meet Grizzly Peak Boulevard at the steam train in Tilden. From there it was south on Grizzly Peak, right on Claremont, and through Rockridge to Broadway, and then a straight shot to Jack London Square. Clocks at 26 to 27 miles, depending on which program you ask.

One of the runners (the notorious Mike Palmer) mentioned that he knew of a similar lark that was done in Utah - a group of ultras ran 80+ miles of the Express in UT. I thought: what a great half-baked idea - we should join up! So I got the organizer's email and said hey, we should have a series or something. First one to run the whole thing gets a Pony Express medal or something (design based on picture below:


As it turned out, the day of the second PE Run, I noticed this plaque on the side of the old Wells Fargo building in the SF Financial District, which is now the HSBC Building and which was the final terminus of the Express. Totally by coincidence I stumbled across it the same day.

Well, the other guy with the Utah version never wrote back. But of course I still think it's an awesome idea. Since it looks like I'll be away for four years, I just hope nobody else gets the same awesome half-baked idea and forgets all about little old me. So if anybody does organize or adjudicate (or whatever) a run of the whole thing, then goddammit I want the last leg named the Mike Caton Memorial Last Leg of the Pony Express or something. Or like proceeds go to a good charity (my tuition). But if such a thing does start up, then I want to be part of it. [Note: it has since been done by Karl Meltzer.]

Last summer I took a picture of this marker in Scottsbluff, Nebraska. Look familiar?