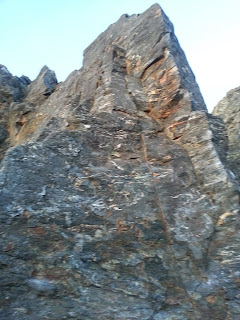 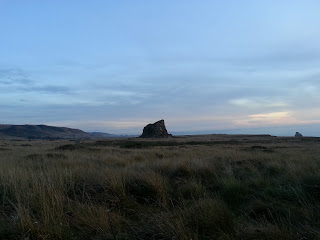 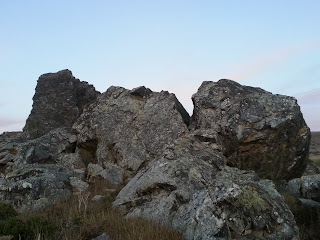 There are rocks in the coastal moors just south of Fort Ross that are a) good for climbing and that are b) smoothed off in odd ways, high off the ground, that the California State Parks senior archaeologist has stated in writing was likely caused by mammoths rubbing their tusks. The sunset was spectacular that day too. (By the way, Fort Ross is pretty cool too.) 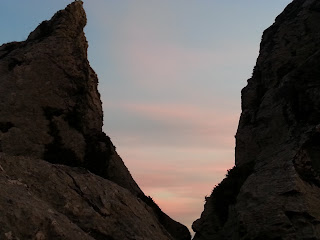 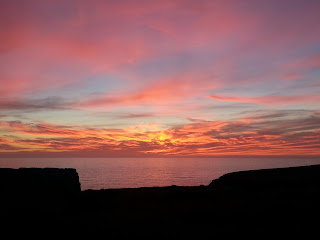 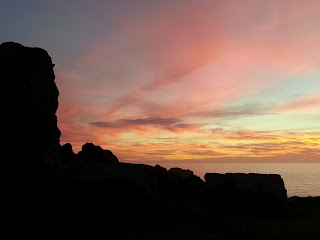 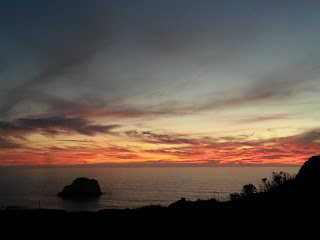 Blackstar Canyon Indian Massacre May Be Made Up

Long-form piece in the OC Weekly here. I had only vaguely heard of this particular story before and despite repeated trips into that part of Cleveland National Forest, had never heard the area's spooky reputation before. OC is one of the smallest counties in California and Trabuco plus Crystal Cove are really the two best open space areas there are; best not to write one off for being "haunted".
Posted by Michael Caton at 11/29/2013 11:50:00 PM No comments:

The Singularity may be coming for personal trainers sooner than you think. A Wired paper highlights market niches for personal drones, one of which is running. I hate to say it but that sounds awesome, mostly for all the times I've seen wildlife or a great view and wished I'd been able to take a picture. 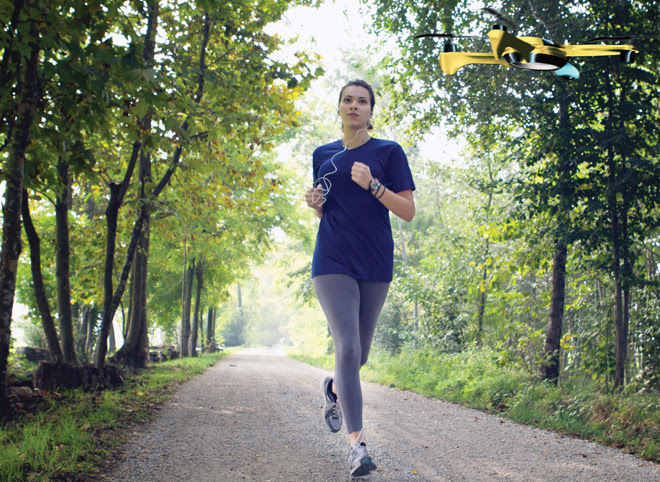 You might say "really, what could a drone do that my watch/phone/iPod couldn't do?" To this end, tthe writer also makes the point that a visible drone would be good for safety, but that the menacingness of the drone should match the task. During a fun run, you want a nice day-glo critter flying around taking pictures and encouraging people. But if you're worried about safety, something that looks more like this guy might be useful.
Posted by Michael Caton at 11/23/2013 12:16:00 PM No comments:

Below is a zoomable map of world forest extent, as well as losses over time. here's a link to a high-res zoomable map showing global forest extent and loss. On the full map the Amazon doesn't look great either, but here I have it zoomed on Southern California. Keep in mind this is the current map, but all of SoCal's forests will have burned by 2040, at current rates.

Thought I'd take a look at the numbers from what used to be Ann Trason's race in my old backyard in the East Bay hills. Until I coincidentally ran some of the still-marked trails later on the same day this year, I'd completely forgotten about this race, or rather hadn't thought "hey it's October in the East Bay hills, when's Fire Trails" which come to think of it I guess is forgetting. (Hey, sue me. I've been in another city in medical school.) I was sad not to have used the chance to stop by to see some friends, but not sad I didn't enter; had no time to train anyway. Here's a scatterplot of the results. 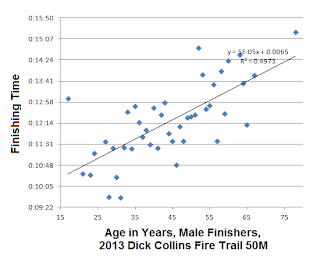 What those numbers above mean is that for this curve (with a decent R^2 value) male runners gain 4.3 seconds on their mile split in this race per year of age. This is a little more pessimistic than the claim that runners keep their times until their sixties, as argued by many, most recently and famously McDougall in Born to Run. More interestingly, the women were all over the place with a much worse goodness-of-fit score that predicts only a 1.7 second gain on mile split per year (below). This is the trend I'd expected ahead of time, but not to this degree! Being all over the place is emphatically a good thing because it means that race results for you ladies are much less predetermined by age than for us men, and on top of that your time increase per year is smaller. Whether this is a result of universal human biology (women innately resemble fine wine) or something to do with selection (e.g. women start racing later in life, or are more likely to interrupt racing careers with more-traumatic-to-female-physiology childbearing which can be recovered from, and so the times show that) is another question. 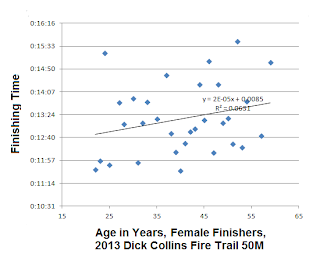 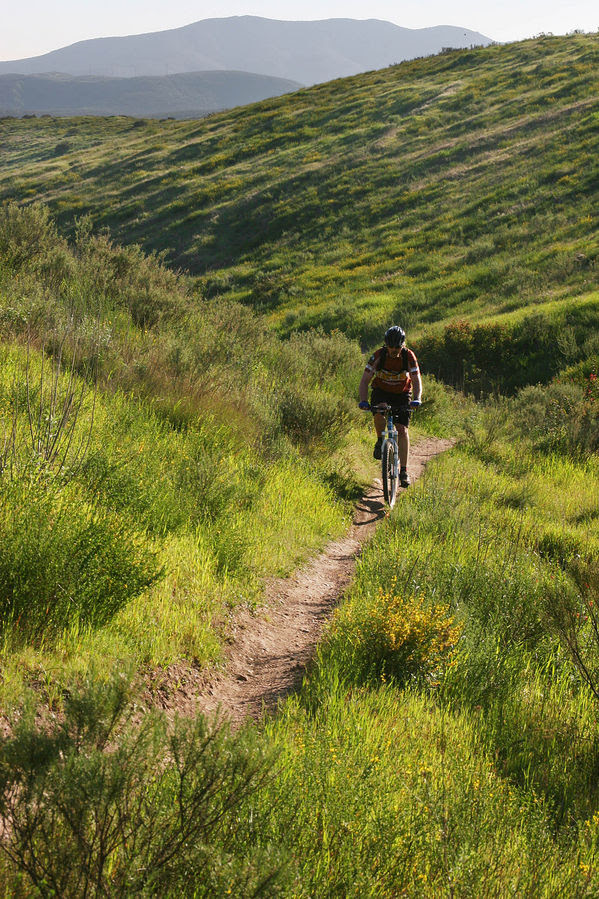 
Yes, you read that right. Both California and U.S. Fish & Wildlife have specified which trails should be closed or curtailed; details in this piece. CA Fish & Wildlife has also frustrated the community and local government by putting a surprise roadblock on the plan for Del Mar Mesa, which just a few months ago finally looked like there was a management plan to officially open it. Conservation is great, but it seems that the agency is working against local governments and communities, not with and for them.

I suspect there is more going on between CA Fish & Wildlife and the City of San Diego than the public knows about - especially since by way of comparison, that I know of, in recent history CA F & W has not interfered this way with any Bay Area city's park planning.
Posted by Michael Caton at 11/13/2013 01:10:00 AM No comments:

Very nice run yesterday starting from the Alpine Lake Dam, heading up toward the peak and then coming back on the exposed western face of Tam (Matt Davis and Coastal). Who knows how many miles, it was a blast. That little climb up to Laurel Dell is a good bit of fun. It's still amazingly dry and you can see how low the reservoirs are. These are just from the dam where I started, except for the pic of the falls which is from jimcoda.com. 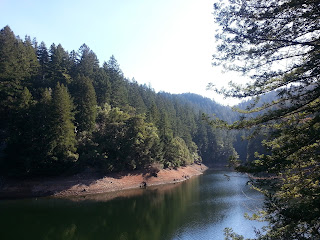 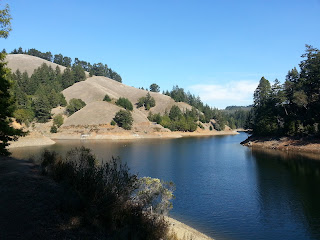 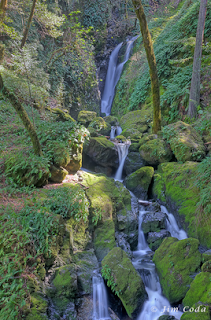 Here's the negative - of course, on the way back, I ran across some jackass who couldn't wait to get back to his car, who was smoking on the trail. I waited to make sure he'd put his cigarette out and when I couldn't find the butt, I asked him where he threw it, and he said he kept it with him. He seemed very offended that I'd been watching him. These people need to get over themselves. If you can't help your habit, then don't come into the woods in California!

Yes, it was awkward to have that conversation. But I thought of it this way: if later that day I'd heard that a fire had started in that fantastic forest, and I knew I could have prevented it, I couldn't sleep at night. And here's my challenge to everyone: this kind of situation is a test of our actual values and shows whether we care more about conserving an outstanding resource like this, or trying not to make the occasional careless jackass a little uncomfortable. 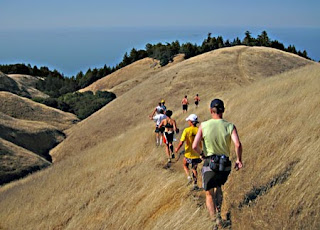 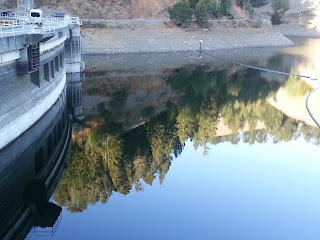 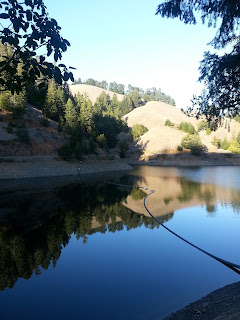 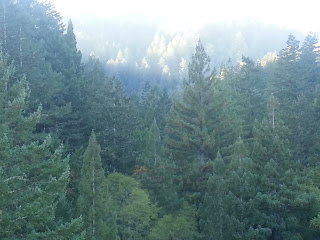 Very sad. A dog that escaped his house to run a half-marathon 2 weeks ago has now died of a heart attack.

The noble sacrifice of Boogie Butts will not have been in vain, as he was able to carry the message to Athens that the mail man had been defeated. Rejoice! Woof conquer!
Posted by Michael Caton at 11/10/2013 08:53:00 AM No comments:

Morgan Territory and ANOTHER Bobcat

I don't know what it is with these bobcats but I'm starting to think these guys are following me around. Bobcat paranoia? I went out to Morgan Territory yesterday and twenty minutes in, came around a turn on the trail and startled this feline friend, who promptly ran so fast down the steep hillside that I watched to see if it would start tumbling. But of course not, it bounded gracefully over a log and hid in a bush.

M.T. is classic East Bay steep hill, oak scrub and pasture in the shadow of Mt. Diablo. It's very easy to see how well the cattle tracks mark the isoclines. Consequently instead of following the human trail ups and downs, to maintain constant elevation on the way back I followed the cattle tracks.

Of note, I partly went there to see the damage from the fires on Diablo in September, since it's on the southern aspect. Possibly due to the dark overcast yesterday, it wasn't nearly as obvious as it was from much more distant Rose Peak a few weeks ago.
Posted by Michael Caton at 11/04/2013 08:44:00 AM No comments: 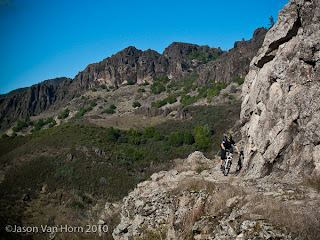 Images above from bermstyle.com and zovirl.com. Part of the growing Bay Area Ridge Trail. Excellent trail, and if you want to make a day of it, you can start in Calistoga and go all the way up to the top of Mt. St. Helena, probably comes to about a full marathon on an out-and-back. Boy is that ever some volcanic stuff up there; not surprising at the base of the not-long-extinct volcano (that flat top isn't an accident) but it still feels more like Oregon than California. Thanks again to the volcano and the remnants of Farallon Plate subduction for good soil in Napa Valley and the resulting healthy vines and coolest petrified forest in the world that no one knows about.
Posted by Michael Caton at 11/03/2013 11:30:00 AM No comments:

What Are the Odds of Getting Assaulted While Running?

For all trailrunners' worries about mountain lions and other critters, the scariest animal we're likely to meet is (drum roll) an ill-intentioned human - but how likely is that? Since in the U.S. we just set the clocks back an hour, after-work runs are going to be in the dark until March. So, Science Based Running tries to calculate the odds. The answer is we still don't know, because crime stats aren't collected that way. That said, violent crime in the U.S. is about as low as it's ever been.

Here are safety tips for running at night, and here's a mapping site that plots crimes by type over the last six months.
Posted by Michael Caton at 11/03/2013 11:19:00 AM No comments: 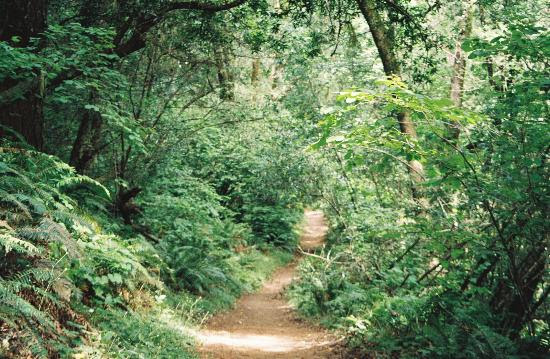 
1. Running in Point Reyes is still awesome (unsurprising report of the year). I started at the Bayview trailhead, went over to Drake's Estero and did a bunch of other stuff, then despite telling myself no I don't need to go up to the highest point in the park, ended up on Mount Vision and Point Reyes Hill, because it was actually on the way back. Saw a badly gnawed deer shin in the middle of Muddy Hollow Trail at one point.

2. There are no redwoods in Point Reyes, although it didn't hurt the run any. That's because PR is entirely on the Pacific Plate side of the San Andreas Fault and the soil type changes noticeably. You can really see this along the reservoirs down on the Peninsula. That said, different soil didn't stop these trees below from growing (in Victoria, Australia) - it's only fair, because those Aussies' damn eucalpytuseses have damn near taken over coastal California at this point. Apparently sequoias have done pretty well in Europe too. There's even been a Nature paper on fundamental limits to tree growth. 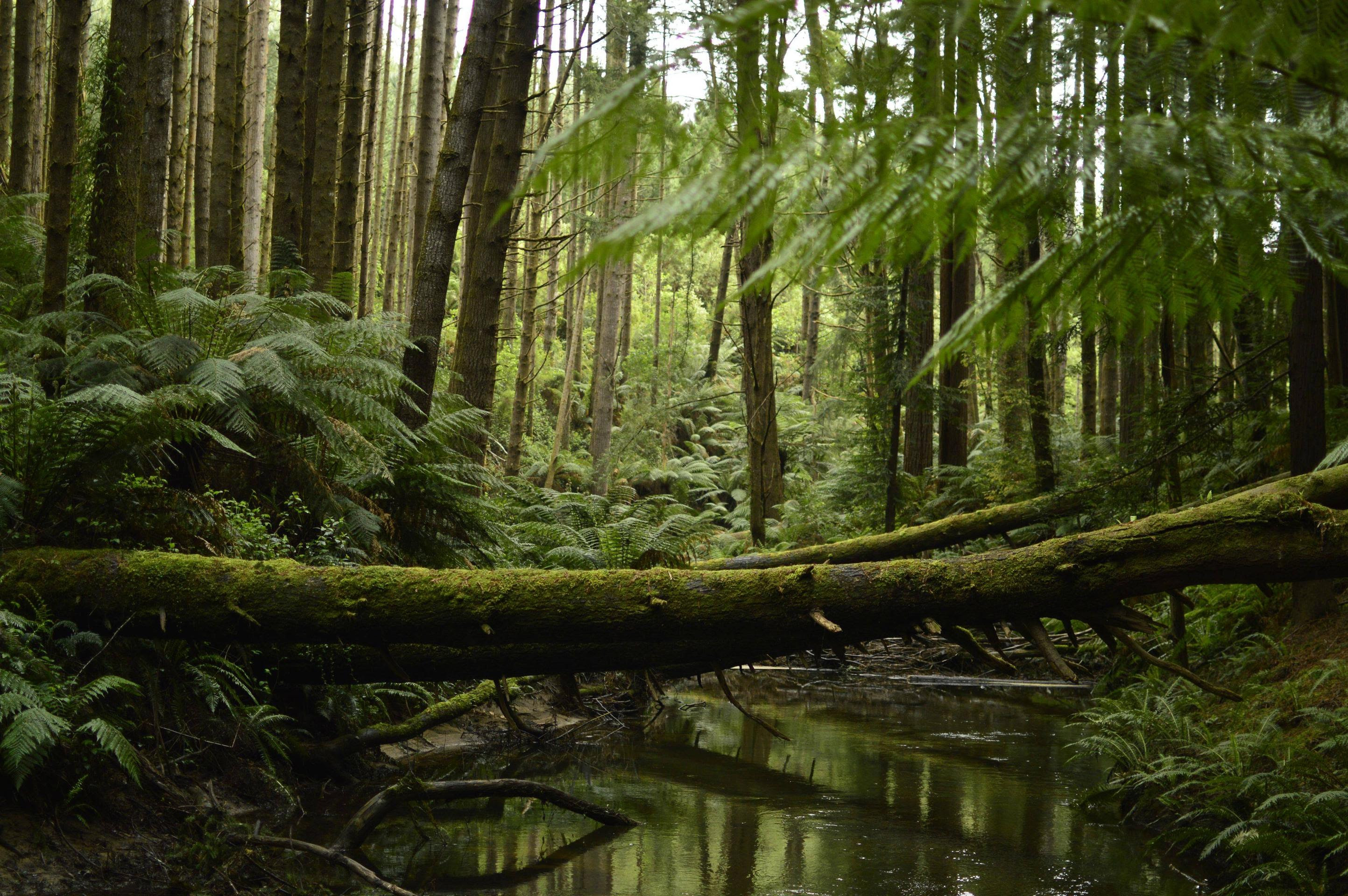 The weekend on the trails was cut shrot by a plane flight to SoCal but this was redeemed by dinner at Richard Nixon's favorite Mexican restaurant in San Clemente and some tasty Armenian chicken at Zankou on Sunset, so not all was lost.
Posted by Michael Caton at 11/01/2013 04:44:00 PM No comments: