*NOTE*: if you're reading this for directions/trail reports, note that I unintentionally took a different way than the "standard" route, and can't guarantee you can get to the top this way. But I haven't seen this on the web either so I'm posting it here. Read on for route description.

I'll be honest, from the satellite imagery Tecate looks like a rocky inland sh*tpile, but it's actually a pretty cool little climb. Between the mountain you're on and the mountains just north of you, you feel like you're actually way up there and there are some steep drop-offs. Pretty good for less than an hour from downtown.

That said, I didn't go the "correct" way, and didn't get to the summit. I'm not even disappointed since it was a cool cloudy day and part of the reason I turned around was that I had already gotten into the cloud deck, so I wouldn't have been able to see where I was going, much less the view. 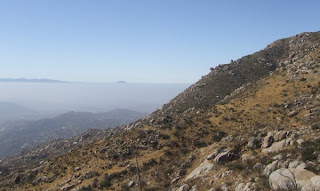 Near Tecate summit. From Miragee.blogspot.com.


The way I went: the road that turns south off 94, 0.5 miles east of Barrett Junction Cafe. (Don't park at the Cafe without eating there, but that shouldn't be a problem, because the place is awesome.) The road that goes up the mountain should be driveable for 4WDs but there's a locked gate; if you get there and it's open, don't assume it will stay that way. There's a road that switchbacks up up up, with some nice views of the valley and mountains to the north I don't think you'd get on the normal route; near the highest point on the road you pass a cluster of three very lonely-looking trees, then you reach the highest point on the road at a small water tank on the west shoulder of the summit. Just to the south(=downhill) of this, there's a single-tracky looking thing that takes off very steeply to the main summit. Not having gone up to the summit, and not being able to make it out on the satellite map, I can't guarantee it makes it to the top or even that bush-whacking would be possible (couldn't see how steep because of the clouds). Why did I go that way? Because I put in Tecate Peak to Google Maps from downtown SD and that's what it said! (Insert sad trombone, "wah waaaahh!")

The way you're supposed to go: every other source, including the late great Jerry Schaad's guide, says approach from the southwest and turn west off 188 0.4 miles before it crosses into Mexico. From Schaad:

At a point on Highway 94 about 19 miles beyond Jamul, turn south on Highway 188. Just 2 miles down this highway lies the Tecate border crossing. Don't cross into Mexico. Instead, turn west on an unpaved road, just 0.4 miles shy of the border itself. That road swings south, hugs the border fence for a while, and then turns northwest and starts climbing the flank of Tecate Peak. A locked gate blocks the road 2.8 miles ahead, and you must find parking where you can below the gate.

I probably liked this run more than I otherwise would have because of the cool cloudy weather and because I liked Barrett Junction Cafe, but it's still a real mountain either way. I will definitely be back to do the normal route. One note, do be ready for interactions with Border Patrol. They were a little puzzled to see me up there and one kindly explained that this was not the normal way up. As it turns out they were following somebody's tracks and one officer wanted to see my shoe tread to make sure it wasn't me. They're just doing their job. I did have one negative interaction with Border Patrol a few years ago on the PCT at the border; the guy basically tried to intimidate me and told me I shouldn't be on the trail. The guys that were up on Tecate yesterday didn't pull that, and that level of more professional conduct is what I normally experience with Border Patrol.
Posted by Michael Caton at 2/28/2014 04:11:00 PM