Contiguously, but not all in one go. Previously I ran around the entire Bay. And finally I've crossed the entire Central Valley, until I connected in Benicia with my Round-the-Bay track. I was met by DM and AD (scroll down to the last picture if you click on this), whose identities are being protected out of the misconception that details of their misconduct that day could somehow sully what remains of their professional reputations. Private Pyle and Shizad turned up for dinner as well.

Ultimately I'll be running across all of California from Nevada to the Golden Gate. I'm just about half done with with Western States Trail (but only contiguously from Sac as far as Rucky Chucky, see below): 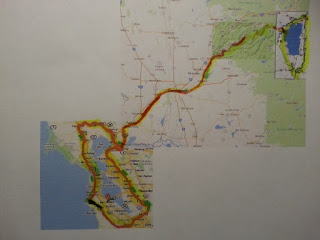 Are you looking at this and thinking "what an archaic way to record this"? Me too! Now that I've gotten lost on the Western States Trail a few times (and seen 4 bears in the space of a year!) maybe it's time to get one of them thar GPS watches.

Other projects probably for after I retire: the whole CA coast (I already did San Diego County, now I only have 1,000 miles left!), the Siskiyou Trail, and of course the PCT. If I'm not bored and/or disabled by that point the Laurel Highlands Trail in PA might be nice too.
Posted by Michael Caton at 6/14/2015 05:08:00 PM