Back around 2009 a friend in San Diego told me that he thought he'd noticed it getting more humid in San Diego County since he moved there in the early 90s, and he attributed this to human activity; specifically, people using water for landscaping. I didn't necessarily buy this, partly because like me, he'd moved from back East, and humans acclimatize very quickly to the Mediterranean climate. You get more sensitive to any mild discomfort, and what previously seemed to the climate-beaten Northeasterner like paradise might soon become noticeable humidity.

Or, was he right?

I looked at the Weather Underground historical data for average humidity on August 1 (single day, only because there are no annual or monthly averages, and August 1 because it's warm and it's after June gloom is over so presumably more sensitive.)  First I looked at KSAN, the San Diego airport. For the period 1950 through 2016, there is no change in humidity. But there might not be - the ocean is going to control the climate. What about an inland suburb which experienced growth (and more lawns) in that period? So I looked at Poway. Humidity data is missing for the period 1969 through 1998 inclusive, which is a bit frustrating because if I want to put together a scatter plot showing the relationship to population, that's exactly the period when Poway was growing fastest (from about 7,000 to about 47,000.) 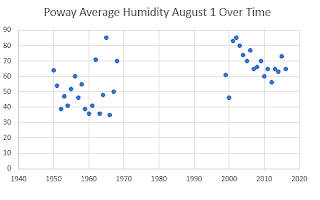 A quick t-test shows that it's a statistical difference, with averages of 51 and 68% humidity respectively. You might actually be able to tell the difference between those two. So is this because of people watering their lawns? Because of some other broader climate change? Or (my bet actually) because of different instrumentation when they started collecting humidity data again? The thing to do would be to look at another inland city that grew over this period (Vista? Escondido?) with complete data, and see if they show the same effect - and then at a town that started small and stayed small. Assuming that there's a 1:1 correlation between population and human-produced moisture in the air from lawns etc., then if you see a difference in trend between the two, OR if neither of them change, then it's not humans watering their lawns. If you do, it supports the argument.

I won't waste much more of your time because here's the data for nearby (also fast-growing) Santee from Weather Underground: 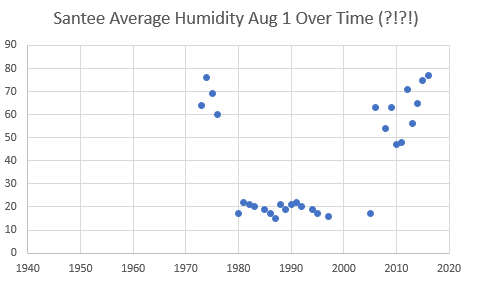 I mean come on. Lots of missing data, but more importantly, this pattern has "different or incorrectly used instrument" written all over it. And I think the people in Santee would have noticed if their humidity suddenly dropped dramatically, and then increased again. So until I can find a reliable source of historical humidity data, the answer won't be forthcoming. (As always, if you know of such a source, please comment.)
Posted by Michael Caton at 8/06/2017 07:27:00 PM