Where Should You Live? Critter Fatalities By State From 1900

Added later: a NYT article shows that we do indeed spend too much time in the U.S. worrying about things with venomous things and things with big teeth, as opposed to dogs and wasps. And even considering wiki statistics, based on Wiki statistics from the 2010s for snake bite deaths and population, a person in Australia is indeed more than 11 times as likely to be killed by a snake in Australia than the U.S. - but even in Australia you still didn't even have a 1 in 13 million chance of being a victim from 2011 until today. Your morning commute is far more dangerous than living in Australia.

Also added later: here's a guy screwing up my statistics who was also bitten by a shark in Hawaii just a month after being attacked by a bear in Colorado. If I were this guy I would have business cards made up that said this.


In light of the recent seasnake that washed up on a beach in Oxnard (pleasantly, a few days after we were swimming across the channel from there), I looked up the statistics for snakebite fatalities in the U.S. (No recorded seasnake fatalities.) Interestingly, at the bottom of the wiki article for snakebite fatalities, they have links to mountain lion, bear, alligator, and shark fatalities because they know there are people like me running around loose who will look those up next anyway. (Hereinafter these five types of animals are referred to collectively as "critters".)

And of these critters, how many deaths do you think they've caused in the U.S. since the turn of the last century? 226, over the last 115 years. Not even two a year, not many! Compare that to the about 31 deaths per year caused by dogs (actually, 42 in 2014). And of course (being responsible) if you're out in the wild you are much much much more likely to be killed or injured by falls, drowning, exposure to heat or cold, dehydration, or other people than by wild animals. Of course drowning doesn't have pointy poisonous teeth that rush at us from the darkness, so our dumb Type-1-error making brains pay less attention to rushing water rising around our ankles than a twig snapping in a forest.

Still, I decided to compile absolute critter fatalities by state. In calculating this, I took out BS ones (i.e. snake handlers and dummies who keep non-native poisonous snakes at home don't count as a legitimate bite. Come on guys.) Interestingly, Texas has fatalities from the most types of critters (four of the five) - they finally got a gator fatality on the board this summer - and in fact Texas is the only state where the range for all five critter types overlaps because there are sharks and gators on the Gulf Coast, snakes all over, mountain lions in the west, and bears in the Big Bend part of the state. (Come on guys, you can do it!) There are 22 states with no fatalities from these critters since 1900. If all these critters scare you, then the biggest contiguous area with no critter fatalities stretched from Minnesota, to the west of Missouri and down to Louisiana. (To be honest I have difficulty believing no one died from a snake bite in the southern part of this range since 1900, and if this omission from my data here offends you I'd like to invite you to go dig for the stats yourself.) Northern Iowa/Southern Minnesota is the only place safe from all five, which no doubt is why the Mayo Clinic was placed there, as there's no other reason to want to be in Rochester Minnesota.

Ranked in order, the states with the most critter fatalities in absolute terms are: 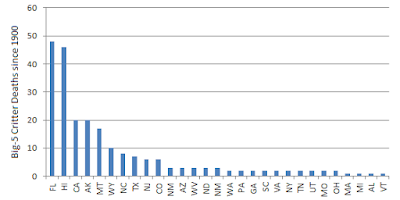 However: the absolute number of critter-victims in each state is lacking as a risk indicator. Why? Look at California and Alaska, which are tied. There are a lot of people in California, and not so many in Alaska, and yet critters have managed to get the same number of people in each state. Concretely speaking, there are 38 million people in California, and not even a million in Alaska, so walking around in Alaska it's actually *76* times more likely that critters will get you! So if we weight for population (i.e. critter fatalities per person in the state) what does it look like? Now, Hawaii, which somehow manages to keep its shark attacks very quiet (I wonder why?) comes out on top, so I adjusted the rates to express the others in terms of how many Hawaiis-worth of critter risk they represent: 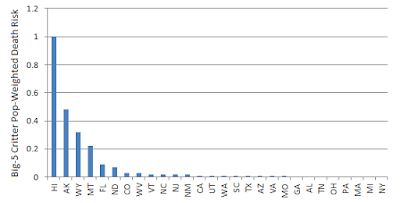 Interestingly, Hawaii has only ONE type of the five critters, but apparently in Hawaii that one type of critters eats well. In this analysis, California drops from #3 to #13. An also-ran! Even New Jersey is per capita more dangerous than California! (Granted, this is owing to the black-swan/white-shark event of the Matawan Maneater.)

People in Hawaii are in the water a lot, which reminds me that I once calculated statistics showing that people in Florida were 3 times more likely to get attacked by a shark, but people in California were 3 times more likely to be killed by one. (Which is to say, once you're attacked, you're 9 times more likely to get killed in California than in Florida. Because we have great whites and they have coot widdle tigers and bulls.) But again this statistic still understates the danger, because Florida has a lot more accessible coastline (California is mostly cliffs) and it's warm, so lots more people go in the water, therefore a LOT more exposure to shark attacks in FL. And still more fatalities in CA? That is to say, once you're in the water in CA, you're much more likely to be attacked and killed - but I don't have ocean bather-numbers to back that up.

And a good day to you. 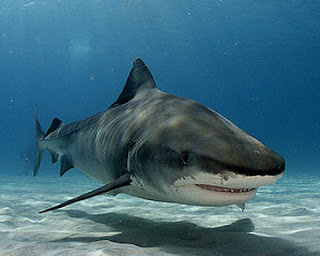 Above: the head of the Hawaiian Tourism Development Board. He advises that all tourists bring Worcestershire sauce and perhaps tuck a sprig of parsley behind the ear before swimming. From animaltime.com.
Posted by Michael Caton at 10/18/2015 04:18:00 PM