Santa Cruz Island from space, courtesy NASA.
Somehow these large islands off the coast of Ventura and Santa Barbara County escape the notice of basically everyone in SoCal. We went out to Santa Cruz Island over the long Columbus Day weekend. It's been a long time when I've been in a brand-new (to me) part of California, and seeing the state from disorientingly new angles, it was like I'd just moved here again: over there is the front country of southern Los Padres National Forest, down there is the bumpy spine of the Santa Monica Mountains, and right over there is the marine hyphen called Anacapa. We camped in Scorpion Canyon, about a half mile from the beach. Close enough to hear the waves but not so close they kept you awake or made you worry you would get wet. It is most certainly a place to do nothing. It was pretty swell. 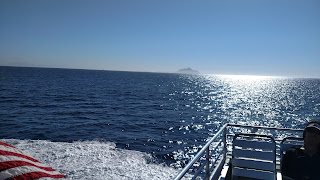 Above: Anacapa to the east as we head south toward Santa Cruz

And wildlife? We saw Risso's dolphins on the way over, a humpback in the channel on the way back, several silly seals, and some critters found only in the islands - an island scrub jay, and plenty of brazen human-habituated housecat-sized island foxes, which we named Foximus for obvious reasons. The foxes are nifty because they're a perfect example of island dwarfism in action. (They've only been separated from the mainland foxes for ~10,000 years, and the subspecies on each island in the chain actually have different numbers of vertebrae. Similar to cave fish losing their vision in a few thousand years, it's not saltation when you're losing information - especially when it's a repeated structure. They don't quite rise to the level of coolness of Galapagos finches since it's not obvious that they're uniquely adapting to each island. But still.) 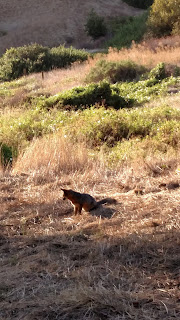 Above: Foximus, one of the Channel Island Foxes that kept us company

We were only on the island for about 30 hours, but that was fine. It was really nice although I was surprised by the bugs, and it was actually pretty hot. When we arrived, my wife wisely set up camp and started a combination of three activities: napping, cutting it back, and chillaxing. On the other hand, I am a moron, and I just had to go running over to one of the few harbors, Smuggler's Cove (almost all of the island's coast is several-hundred-foot cliffs) and to Montañon Ridge, which honestly is ugly as sin - crumbly trail, unvegetated dirt ground - and it was really bright and hot up there. I ran out of water and asked, "What am I doing up here? There's a beach and blue water down there!" Which, after I returned by way of Scorpion Canyon loop and the wife hydrated me with red wine, I promptly took advantage of and did some swimming. The water was amazingly warm. The next morning we went kayaking to sea caves around the island, which unfortunately I had to bail on because I was getting seasick. 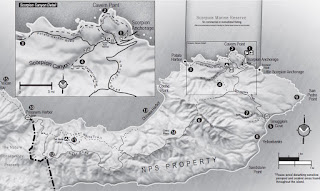 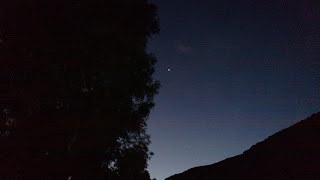 Above: Venus from Scorpion Canyon, just below dawn.
Below: sunrise at Scorpion Anchorage 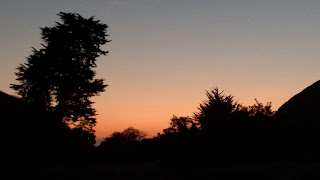 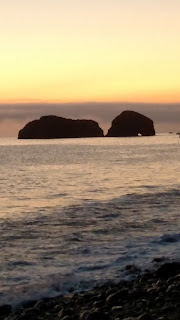 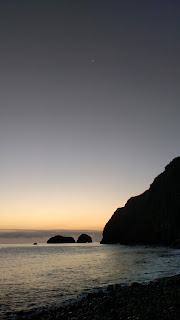 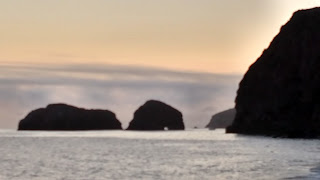 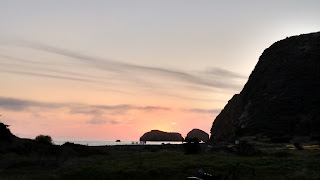 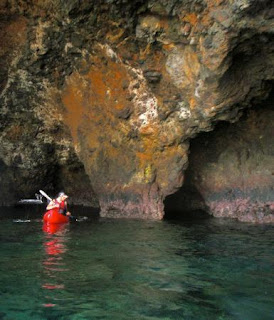 Above: we went into some sea caves like this one, but didn't take cameras, hence this photo is from tripadvisor.com 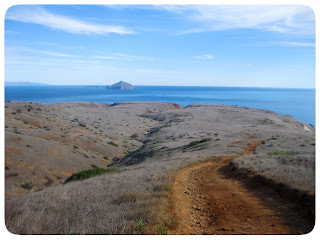 Above: this is about as pretty as the land up on top of the island got. From betweentwopinesblog.com


As with all trip posts, a word or two about food is in order. On the island we had power bars and red wine, which was quite rewarding, but before going across the channel we ate a HUGE amount of raw oysters and clams at the Jolly Oyster, right on the beach in Ventura. I was annoyed as I was trying to pry open clams that they were definitely clamping shut in reaction to my efforts - but also glad that they were alive so I could punish them. The proprietor tried to assure me that they do not have nervous systems capable of appreciating their fates but that's a bunch of liberal crap. In Cthulhu-like manner, for those that resisted me the least, I showed them mercy by eating them first. Those that held out suffered more. One that was particularly foolish in delaying the inevitable, I let sit alone and isolated from its fellows for quite some time, and then chewed extra slowly, reflecting that perhaps in a symmetric irony, the Lovecraftian nightmares of mollusks take the form of Euclidean warm-blooded tetrapods like myself. No I was not high at the time, nor am I now. We also hit Fisherman's Catch, where I did not psychologically torture my food, and which is about as close to an unpretentious East Coast seafood restaurant as any I've been to in California (on the plus side, the closest in the U.S. I've come to the quality of New Zealand fish and chips which is elevated to an artform; on the minus, no crabcakes dammit!)

Coming back across the channel, you could see Topatopa Bluff quite clearly, which again made me want to get into the mountains around Ojai as I did a year ago. I've been in this state for going on two decades and it keeps revealing new faces. A project for another time!