Sherpa Everest Guides: Eleven Times Deadlier Than Being a U.S. Soldier in Iraq 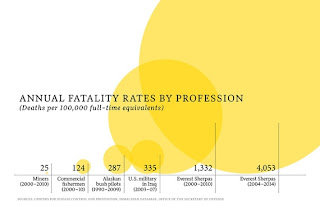 Years ago, we didn't used to count Sherpas' ascents on Everest. Go up with someone else who's carrying your stuff, it counts...go up carrying your own AND someone else's stuff, it doesn't Go figure! It sometimes seems even in the case of the first two people who summited, we've done our best to remember the non-Sherpa, and forget the Sherpa. This, despite the non-Sherpa constantly reminding everyone that he was part of a team of two. Neither Norgay nor Hillary could have done it alone.

The thing that made me personally so angry about this tendency and the most recent tragedy, and at the continued lack of recognition of what the Sherpas do in getting people up old Sagar Matha ("guide" doesn't begin to describe what they do) is that without Sherpas, there would be no climbing season. Every year these guys lay ladders across the Khumbu Icefall, a treacherous place of crevasses and seracs - which do sometimes move. Every year these guys put up fixed ropes. Ever climb a glaciated Cascade? I bet you didn't have fixed ropes there, or (obviously) people risking their lives to fix them for you. For climbers who come from outside Nepal, ultimately Everest is a big lark; they're there for fun, and that's all there is to it, no matter how big the words are they use to describe it. It's not like they're delivering critical medicine to someone at the summit (or something equally important). For the Sherpas, it's how they support their families and create a better life for their kids.

So today, take a few seconds to think of the people who dedicate their lives to the outdoors in a very committed and profound way, far beyond anyone who travels to the Himalayas to score a personal point.
Posted by Michael Caton at 4/22/2014 06:52:00 PM