Cross-posted to Cognition and Evolution MDK10 Outside.

New analysis of football stats at advancednflstats.com, from an expected utility standpoint, rather than just "yards gained". One yard from the 50 to the 49 yard line is not the same as one yard from 1 to the end zone. The article points out that even points expected is limited and must be considered when time is not a factor, since a team up by a single point will sacrifice the opportunity for more points just to run time off the clock, and avoid the small chance of turnovers. Of course the departures from rational optimization are the most interesting, but they don't get into that (yet). A lot of those apparent deviations from rationality may in fact be maximizing something besides win-loss records. Professional football is a commercial endeavor and isn't played in a vacuum, and contra Lombardi, winning isn't the only thing. Profit is.


Below: from the linked post. Note the (unsurprisingly) slightly sigmoidal (importantly: non-linear) shape of the curve, which is why expected points is not the same as yards gained. 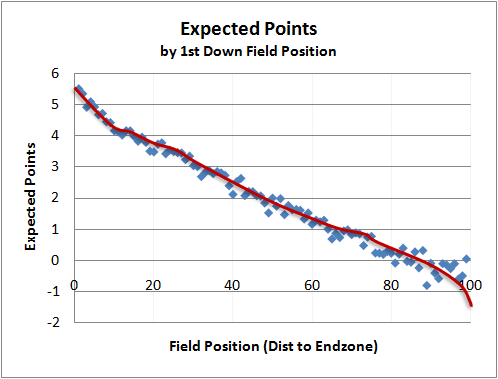