Maybe it was a little greener during the early pleistocene (or whenever the newly discovered Homo namedi lived.) From National Geographic, this is the area around the Sterkfontein Caves in South Africa where H. namedi's remains were found - 15 of them, deliberately put in the cave after death. 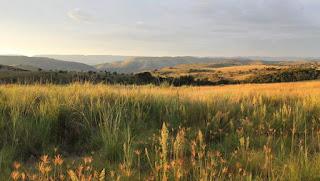 This area of South Africa is literally the birthplace of our genus, and possibly our species. That we find places like the Bay Area pleasing, if they look similar, should not be surprising. In a way we're like aliens in most of the non-African climates on our planet, and by coming to another Mediterranean area, we've come home. Note, the area around Sterkfontein is not truly Mediterranean, and even during an ice age, the high pressure zones in the oceans that maintain the deserts and steppes (and Mediterranean areas) on continents to their east would be in the same place. But they do get similar Koppen designations, and the range of lowest monthly low and highest monthly average high in today's world in nearby Johannesburg are 40-78F. That sounds pretty good to me - but then again, my ancestors evolved there.
Posted by Michael Caton at 9/10/2015 08:17:00 PM