The Peri-Tahoe Trails and History

The 1844 Frémont Expedition turned south from northern Nevada. When encamped at Nevada's Carson Valley on January 31, 1844; guide Kit Carson suggested the expedition detour west during the winter conditions to Sutter's Fort in California for supplies. Local Washoe Indians told them of a route through the mountains, but warned them not to proceed through the snow. Frémont duly ignored the advice and directed the group westward. The Washoe were right in that they would not be able to find food or game, and they ended up resorting to eating dog, horse, and mule just to survive. On February 14, Frémont and his cartographer Charles Preuss made it up Red Lake Peak and became the first recorded white men to see Lake Tahoe in the distance.

That wasn't the first or last time Easterners, with no idea how much snow conditions can change over this much altitude, made a bad decision. Lewis and Clark had to turn around once when they tried to cross the Bitteroots too early. (Also look up "Party, Donner". Rose Peak was pretty cool, especially that waterfall that's halfway there (picture below, from Trailing Ahead). Mt. Lassen is visible from the summit, as is Reno, though mercifully far away and small. 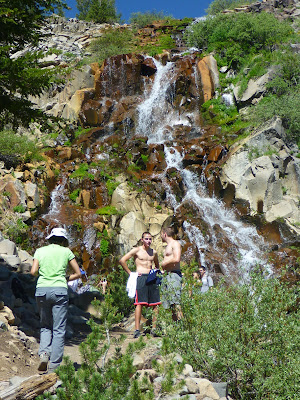 I also just ran the starting bit of the Western States trail, i.e. up and over the Escarpment. Notably greener on the western side of the divide. The monument at Emigrant Pass (below, from Robert Sydnor's Panoramio page) is neat-o: the trail was used to go from Carson Valley to the gold and silver areas on the American River. Robert Montgomery Watson built the monument at the pass, and marked the trail from Tahoe to Auburn.

My time to run many more Sierra trails in 2014 is running out but I have to say, living closer to these mountains has made me appreciate them a lot more already. Davis's own naturalist and science fiction writer Kim Stanley Robinson wrote an essay noting that it sometimes takes a while to understand how fantastic the mountains in your own backyard are, which I'm finally starting to appreciate. 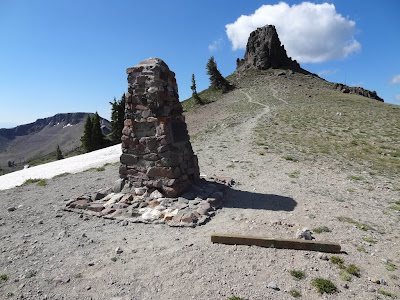 Pee on that divide, and on one side it goes into the Bay via the American River; on the other, into Tahoe and the Great Basin, where the sodium and creatinine will remain until the Earth melts inside the red-giant Sun. Not that your blogger would do that.
Posted by Michael Caton at 9/01/2014 12:55:00 PM