(I already put this encounter on the rattlesnake map; always at top right on this blog.)

A sign in Lusardi Creek Preserve states that there are red diamond rattlers there, and then about 20 minutes after I saw it, I met one of these guys. 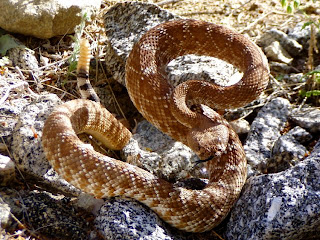 
If you're familiar with the little pond in Rancho Santa Fe, it was in the basalt rocks on the northern side of the pond. As I ran by I heard a slapping sound, and as I looked over on the rock next to me, this fine fellow had just dropped itself down from a rock higher up, onto a rock maybe two feet to my right. I leaped into a sprint, then stopped and turned back. It had taken on a threat posture but wasn't rattling. It didn't have many beads on its tail so it was young. From a safe distance I tossed a few very small little sticks and pieces of bark onto it to get it to rattle but it wouldn't. As I've seen other rattlers do, when it realized all its posturing wasn't making me go away, it flattened itself and played dead, and I left the poor guy alone. A family had just arrived to play in the pond and I made sure to warn them where I saw it, then went about my running business.

I looked up the species to see how much trouble I would have been in if it bit me. Rattlers' venom chemistry is always interesting. I had once been very puzzled that most rattlesnakes have hemorrhagic venom (for your biomedical types, it's a hack of the arginine-glycine-aspartate motif in the IIb-IIIa system on platelets) but Mojave rattlers have neurotoxic venom. This didn't make sense. Evolution works by adapting structures that living things already have to new purposes, not by magically developing things that fit into the same abstract function of a structure. For example: flying squirrels have a membrane between their arms and legs. Birds have given up their entire arm and now use them as wings. It's not like suddenly squirrels will switch from having skin between arms and legs, to having their arms as wings, just because they want to continue improving their flying. By the same token, a snake can't wake up one morning and say, "You know, I like being able to kill things by biting them, but instead of just making them bleed to death internally, I'd really like to paralyze them or make them seize. So I'll just concentrate really hard - there we go - and start making neurotoxic venom instead." So how can a snake with hemorrhagic venom be related to one with neurotoxic venom? (I once emailed an Australian snake venom expert but he didn't write back. Maybe he was insulted at being consulted about wussy American snake venoms.)

The answer is that like most things in nature, venoms are not pure suspensions of a single component. There are a whole bunch of compounds in snake venom and one or a few may get magnified if they're more effective at hurting certain prey in the right way. So most rattlers have a predominantly hemorrhagic venom, and some have a predominantly neurotoxic venom. This shouldn't be so shocking - some humans can produce two different varieties of the same protein (ever have a male friend who had dark hair but a red beard?) And it turns out even within species there are variants. From the Wiki article on red diamonds:

...Norris (2004) warned this species has a relatively large venom yield containing high levels of proteolytic enzymes, especially in the adults. A publication he mentions by Rael et al. (1986) showed it contains at least three proteolytic hemorrhagins that degrade fibrinogen and cause myonecrosis, but no Mojave toxin. On the other hand, three specimens from Mexico studied by Glen et al. (1983) did have Mojave toxin and lacked hemorrhagic activity.


Then again it may be that there are isomorphs that make identification by skin alone difficult (tiger snakes in Australia are one example), and that Glen paper from 1983 cited in the red diamond article from 1983 preceded PCR and easy DNA identification. That said, the one I saw did have the very prominent black and white banding on the tail. There's a more detailed discussion in the Mojave rattler article:

All rattlesnake venoms are complex cocktails of enzymes and other proteins that vary greatly in composition and effects, not only between species, but also between geographic populations within the same species. C. scutulatus is widely regarded as producing one of the most toxic snake venoms in the New World, based on LD50 studies in laboratory mice. Their potent venom is the result of a presynaptic neurotoxin composed of two distinct peptide subunits. The basic subunit (a phospholipase A2) is mildly toxic and apparently rather common in North American rattlesnake venoms. The less common acidic subunit is not toxic by itself, but in combination with the basic subunit, produces the potent neurotoxin called "Mojave toxin". Nearly identical neurotoxins have been discovered in five North American rattlesnake species besides C. scutulatus.[17] However, not all populations express both subunits. The venom of many Mojave rattlesnakes from south-central Arizona lacks the acidic subunit and has been designated "venom B," while Mojave rattlesnakes tested from all other areas express both subunits and have been designated "venom A" populations.