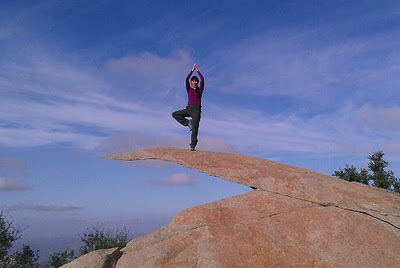 Finally, been wanting to double this for a long time, and got there early enough in the afternoon (gate closes at 5:15, and it's dark then anyway). And turns out there was a race there the day before. Who knew? People not as out of it as me I guess.

One strange thing: beginning around 2:15pm, several people heard very low frequency booming sounds. They tended to come in clusters of two or three, separated by several minutes. It didn't sound like thunder; much more even attack and decay. It could have been mining explosions, weapons testing or training on nearby base, a sonic boom, or even an earthquake - I've heard earthquakes before but they didn't sound like this. A Google search on both the web and news for Mt. Woodson, Ramona, and Poway plus boom, thunder, and rumble didn't yield anything.

I've been up to the top several times before on single up-and-downs but refuse to go on Potato Chip Rock myself for religious reasons. Specifically, the the anti-potato-chip religion.

[Added later: apparently there was some kind of marathon in Carlsbad yesterday too. I truly have my finger on the pulse of the San Diego running scene.]
Posted by Michael Caton at 1/23/2012 10:47:00 AM