Inspired by Patrick Makau Musyoki's new marathon record in Berlin yesterday, I looked for trends in the marathon world records for each decade going back a century. I only included the fastest time in each decade. I expected a plateau like this, but I didn't expect it to be so neatly logarithmic. Explanation of the graph: the Y-axis times are in seconds, so 10,800 is a 3 hour race and 7,200 is a 2 hour race. The horizontal red line is a two-hour marathon, the vertical dark line is 2038, and the light gray prediction line is the trend for future marathons. (Note that the prediction line on the graph is for illustration only - the numbers come from the best-fit equation printed on the graph.) 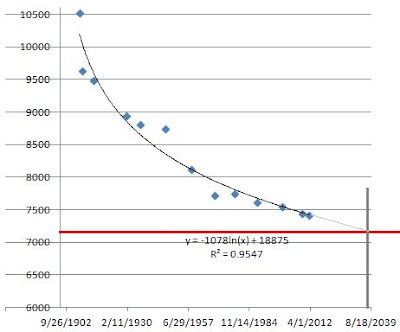 Look at that R. That's a damn good fit. Marathon records are a very logarithmic phenomenon.

A whole crop of articles commented over the last year on statistically improbable sprinter Usain Bolt, who is ahead-of-trend by thirty years. In the same vein, looking at the marathon plot, we shouldn't expect a male human to break two hours in the marathon until 2038. And it's reasonably assumed that the incremental improvements we see in these times is a result of (decreasing marginal) improvements in training, nutrition, and running equipment. Therefore, if this record is broken significantly ahead of that (you can decide how to calculate standard deviations if you want to define exactly what "significantly" means) then I predict one or more of the following will have happened:

- A genuine new mutation and a recruitment sifting system that can deliver the talent to the field, as is presumably the case with Bolt in short distance (someone sequence this guy already);

- Deliberate breeding has occurred by nation states with long-term views and an overbearing need for international prestige (China, we're looking at you, and here's why);

- Most interesting possibility: a population of humans still mostly reproductively isolated and thusfar not competing in marathons, and that has gene variants which benefit them in this event. (Tarahumara, we're looking at you now).