Phase 1 is complete. Five minutes ago I planted a bunch of redwood cones today in front of my house in San Diego. Don't you understand? This is only the beginning.

Forgive the blurriness of my bad cell phone camera; you still have all the information you're likely to be interested in: 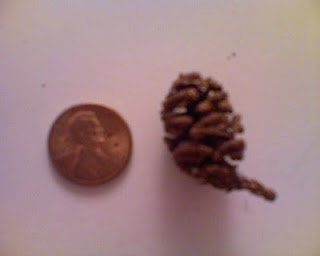 I collected a bunch of these bad boys from the Oakland Hills in Redwood Preserve just after a winter rain. I'll have to give them extra water down here in the Venus-like sun-blasted wastes at the very southern edge of the Mediterranean climate zone, but we'll see. Yes, I know there are various rules about when you harvest the cones, don't let them dry, only 5% germinate, etc. etc. but this is just a little experiment and I planted enough to take advantage of statistics. If any of them do germinate, when I move I'll dig them out and re-plant them; redwood trees wouldn't do any favors to future residents. They're not easy to maintain and one horticulturist described the area under/around a redwood as a war zone.

I'm patriotic and even protective about Bay Area flora. That's why I'm so acutely aware that since the start of the Holocene, western North America has become progressively warmer and drier, and commensurate with that, climate zones have marched inexorably north, redwood forests included. When you're looking at geologically significant periods long after they've passed, the world seems to change gradually. But when you're up close or in one of them, you understand that the universe is not elegant at all scales, and usually there are noticeably, unpleasantly uneven kicks and jumps. For redwoods, the most recent of these uneven jumps are the fires a couple years ago around Big Sur, the current southernmost extent of redwood forests. Barring further human aggravation of the trend, in a thousand years they may well have disappeared from Ventana Wilderness, and Big Basin will house the southernmost stands. This trend has in fact also run almost to completion elsewhere an another of Laurasia's daughter continents, across the Pacific in China; the range of the only redwood outside North America, the dawn redwood, had dwindled to a single forest by the 1940s when it became known to the global biologist community. In the meantime I'm throwing in my lot with the redwoods and giving them a little boost.

Every passing day I am more amazed that this cone contains a solar-powered chemical program to make a redwood tree out of air and dirt. We'll see if it can run on SanDiego OS.