I finally got to Hollenbeck Canyon. It was a rainy and misty yesterday but that was actually quite cool. I shouldn't be surprised at the riparian-ness and greenery of these South County parks anymore, especially in the winter, but somehow I still am. It's a deep, dramatic canyon, and I saw a big coyote trotting off into the mist while I was heading up the trail. I've been sick for quite awhile so it was good but frustrating to finally get out onto a trail, even if it wasn't high mileage. (Have you had your flu shot yet?) The drive out there is pretty cool too. A lot of folks tend not to go south of the 8 very much but you feel like you're in the Old California when you get out past were 94 is no longer a freeway. 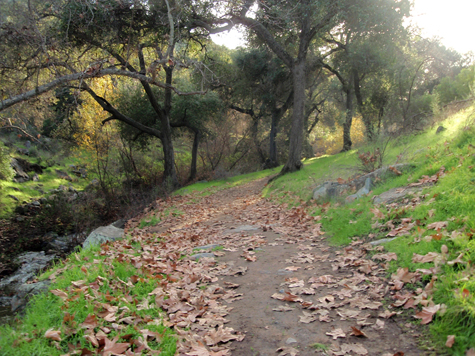 From High on Mountain Biking and East County Magazine respectively.

Now here's where Sycamore Canyon fits into this: my original plan was to run from Sycamore to the lakes in Santee (map below). But I got to the gate on 67, and it was closed, but said to drive around to the north side accessed from Poway, about a 30 minute drive. Fair enough, but guess what? THAT gate was closed too, no reason given! I wouldn't be so frustrated if something like this hadn't happened TWICE before: once when the website gave the wrong closing hours, and once when I went to the Route 67 gate and it was just closed, no explanation. As you might guess I'm a little upset about this and I've given up on going to Sycamore Canyon. This is no way to administer a park. I'm starting to think it would be better if the county sold it off to a private owner. At least then we wouldn't ever expect it to be open and waste our time!

Sorry to whine on my blog but I bet I'm not the only one who's had this happen. If you want to email them about it, go here. I'm annoyed enough that I'm sending printed letters to several people outside the county agency. I hate to say it but things like this make me a lot less enthusiastic in supporting San Diego County Parks.
Posted by Michael Caton at 1/27/2013 06:39:00 PM No comments:

I'm a very bad person for laughing so hard at this. Input and Output in College Football

Now that college football is over, it's time to talk about college football.  Naw, but I just thought this was an interesting observation by notorious intelligence investigator Steve Hsu, formerly of Oregon, now research VP at Michigan State.  A second's reflection will show you how important recruiting is to any sport; your input is players and coaching, and your output is the end-of-season rank.  Which sets up an interesting reverse-quality gradient in coaching.  Hsu says:  "One of the big adjustments I had to make in coming to Michigan State was to Big 10 football. The offensive execution reminds me high school play ;-) Does any team squander more athletic talent year after year than Michigan?"  He has a video of some Oregon play calling to make his point.

That inverse correlation is that if you have weaker players from the get-go, you have to make up for it in better coaching (training and strategy).  Hsu points out that coaching seems better at Oregon than in the Big 10 because the big 10 has strong-recruiting legacy programs that draw more players more broadly. As a result, the Big 10 coaches have better players, but don't seem to work as hard strategically.  (Plus these teams get a break in the pre-season rankings and have an opaque computer system so the college football enterprise can trick fans into thinking the ranking numbers represent an actual competition, which is to say, maximize profits.)

(Note that I valiantly resisted the urge to make Notre Dame fans feel bad.  It's kind of like scolding your dog after it gets beaten in a fight by a cat.  Oops!  I did it again!)