I've completed my little projecty of running the coast of San Diego County from Oceanside to the border with Mexico. (I used the same rules as my Around the Bay run last year.) This was the route: 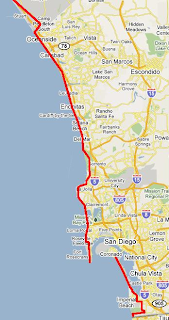 You will notice that I didn't draw the route all the way up through Camp Pendleton to Trestles just for the sake of the map shape, and also that there is a break from Point Loma to Coronado. I wasn't going to swim or kayak a heavily trafficked and in any case secured strait, and I don't want to run through the industrial areas of National City or Chula Vista. So the rule is, since I was running the coast, I had to be even, on a north-south basis, with the next leg. Which I was, between Point Loma and Coronado. (Only time this rule needed to be used.)

North County Highlights: You can run through the southern part of Camp Pendleton (from the Oceanside Marina to Las Pulgas Canyon) if you go through the gate and show your drivers license. From Las Pulgas Canyon it's just along the coast past San Onofre to Trestles, right on the border with OC, and you don't need ID there. Carlsbad is more interesting than Oceanside, at least along the coast. There are nice coastal paths for running in both Carlsbad and Encinitas. In a sign of actually growing up, I can muster zero interest for a visit to Legoland, but at least now I know what the big smokestack up there is and one day I also had occasion to check out Oak Riparian Park. I think the camping area along the coast in Encinitas is closed, but people seem to keep using it. Encinitas has a neat little "downtown", but what the hell is that Eastern Orthodox-looking dome along the road? I also saw a fast runner going the other way who had an artificial leg; at first you feel all happy that someone is empowered, etc. etc., but all those feelings of warm benevolence evaporate when you start to worry that the guy would actually beat you in a race. Not much to say about Solana Beach.

La Jolla, San Diego City, and points south: Torrey Pines Preserve is so far the only place I have seen a rattlesnake in 4.5 months of running trails around San Diego, although the park is not that big, despite what surfing MD/PhDs named Anup may tell you. I really wish the lighting was better in northern coastal La Jolla; this was odd for me because I was running my usual afternoon run from 1998, when I still lived in Pennsylvania and was frequently in San Diego on business (never ran it at night until now). Pacific Beach and Mission Beach are nice if you want to try for a fast mile split and I keep swearing that I'm going to stop in for beer, pizza and an arcade game in M.B. sometime. There are sketchy types on the north side of O.B. The neighborhood in Point Loma reminds me a lot of the East Coast and Alameda in the Bay Area, maybe because both seem to be heavily influenced by relocated Navy families. Silver Strand is nice now and then but gets boring quickly. You can run on a levee to get into Imperial Beach, which has more character (and characters) than it knows what to do with (lots of Native American stores here - what's the deal with that?) The wooded areas at Border Field are cooler than anyone gives them credit for, at least when they're not under internationally-polluted flood water. It's nerve-wracking running at night there when you know border control guys with night vision goggles watching from mountaintops are saying to each other, "Hey Chuck, get a load of the jerk on the access road, he's running south." I wasn't deported, so that's a plus.

Thanks are in order to: the good people of San Diego County's coastal communities who recognize the importance of clean beaches, parks, and pedestrian trails and vote accordingly; and of course, also to the people at the border who were working as hard as ever on Christmas Eve (when I was there) to keep the country's frontiers secure.

So that was the first, easiest, and most boring project of the ones mentioned here. The next two will probably be running from the coast to the Salton Sea, or running a piece of the PCT.
Posted by Michael Caton at 1/13/2010 10:43:00 PM