"California by the Numbers" Graphic 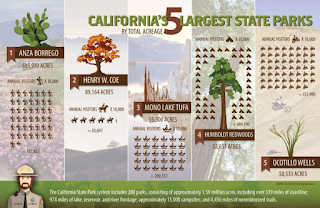 Thought this was kind of interesting. Do note that 5 of the 6 biggest fires in CA history are since 2000. Like most of these things it's a little heavier on style than information but it's still fun. The figure above is just a piece of it; the full original (at readable size) is here.
Posted by Michael Caton at 2/19/2015 11:03:00 PM No comments:

The First Human to Walk Around the World

...was Dave Kunst of Minnesota. (Or at least the first verified, per the article). His brother was killed by bandits in the mountains of Afghanistan, then later his mule died in the Australian outback. (When your mule dies, you know you're somewhere harsh.)

People have run around the world too of course. My biggest regret of 2004 was that I had a chance to join the pack and run with world-runner Jesper Olsen on his aptly named World Run as he came up the Cali coast and somehow I thought I had more important things to do that day...but at least there's a World Run 2! 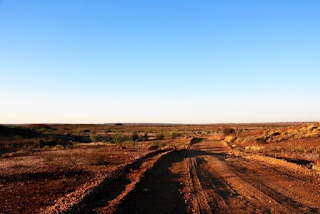 Good on Dave Kunst, but after 30 minutes in the smaller and mildler San Diego outback I'm pretty much bored. Wow...image credit Stefan_G. on panoramio.
Posted by Michael Caton at 2/16/2015 04:14:00 PM No comments:

In California you need a permit for any open fire on Federal land. It would still be better to just forbid fire completely (as New Zealand does) to preserve our forests, as the state continues to dry out - but for now this is better than nothing.

Trail Running in the French Alps

"There is no place that compares to Chamonix in terms of the prestige of the mountains. Maybe Zermatt, but that's about it. The trails have been there for centuries. They weren't initially there because of running. They were there as a way to get to the next valley." So says an article at Competitor (link below) which focuses on the unique culture of trail running in the French Alps.

All the more interesting for my own disagreement with the following assertion: "Whereas the American style of trail running has mostly been influenced by road running infused with perhaps some latent hippie subculture tendencies and a newfound joy of escaping to the high country, mountain running in Europe, and especially in Chamonix, is largely connected to its centuries-old mountaineering and long-distance hiking roots. That's not to say there isn't hardcore trail running throughout mountainous regions of the U.S.—there is—it's just that the adventurous vibe and sense of comradeship among other mountain sports participants is woven into the fabric of life in Chamonix." Yes, there's a good amount of competitiveness in American ultra-running, but the degree of trail contamination by road-running mentality is up for debate. The hippie tendencies of trail runners are not so latent. There's quite a bit of meditativeness and contemplation that goes on out there in the shadow of mountains that were there long before we were born and will be there long after we die kind of feeling. Dare I say there's a lot of camaraderie out there as well! A great read nonetheless.

And not Chamonix but at least in the Alps (below): I bought a Swiss Army knife in Interlaken, but why the hell didn't I get up on that trail!?!? (Credit to trailporn.) A Little Trail Drama on the North Shore of Vancouver

People sabotaging the trails so bikers can't use them, now facing prosecution. I have to admit, I'm always impressed with how well organized riders are compared to other trail users (runners/hikers/climbers) - and on the one occasion where I found myself at a parks meeting disagreeing with representative of a local bike group, it wasn't about conservation, it was just about safety. Maybe I'm naive but I've never really encountered a conflict like they apparently have in North Vancouver, but if it's going to happen anywhere, ironically it would logically be in the city with highest per capita outdoorsiness.
Posted by Michael Caton at 2/07/2015 12:22:00 PM No comments:

You know that are of awesome restaurants in South Sac at 65th and Stockton (mostly Asian, some not)? Okay, probably not. But you should. Because there's a concentration of great-looking unpretentious restaurants there. So far the fiancee and I have eaten at two of them, and we're going to eat at ALL of them dammit, and write about them here, for your convenience. Scroll and zoom the map to see the wealth of culinary opportunities!

Our qualifications as food critics? Well I'm a white guy who's lived in NorCal for a grand total of 12 years, mostly in Berkeley and San Francisco, which qualifies me to feel like I have an opinion on these things you need to hear. (Also I really like food; here are my Yelp reviews so you can adjust my judgments by my tastes.) The fiancee grew up in China, and if you didn't, then you have to accept whatever she says about Chinese food. And about any other cuisine from a country closer to China than whatever place you were born. Why are we doing this? Partly for fun, please inspired by the original project, the "Convoy Conquest", executed by San Diego bloggers Jenne Bergstrom and Miko Osada, who happen to be our friends from when we lived down there. (If you find yourself in SD and you like to eat food, check out the blog.)

So where's the first one? Drumroll...

You want banh mi Vietnamese sandwiches? Go here. Two nights ago I had a sudden banh mi craving and went there all on my own. (Settle down. Sometimes on this little project it'll be just one of us doing the rating.) I didn't take pictures of the samitches. If you don't know what banh mi are, go eat one, my half-assed Android shots will not be what converts you. They have boba too (of course), and a few cans of the weirdest flavors of Pringles I've ever seen (special southeast Asian versions? Maybe. I can't even remember what they are. For Lovecraft fans, if there were non-Euclidean potato chips, these would be them, and I'm now regretting I didn't get some.) I'd say this place is at least as good as Lee's. Only complaint, I'm a cilantro junky and could have used more, but they hit the spot. There's also at least one other Thanh Huong location, in San Jose.

RESTAURANT INFORMATION
Rating: Thumbs up
Date: Wed 2/4/2015
Time in: 7:05 PM
Time out: 7:15 PM (take out, but that's 4 sandwiches)
What I got: BBQ pork, roast pork, fish balls, and sardines.
Final check amount: $11.50, for four sandwiches for crying out loud
Ambience/group size: You can eat in, but more of a take out place, and not great for groups
Parking: shared lot

Is There Such a Thing as Too Much Running?

Everyone who's not a numbskull accepts that some exercise is good. The question here is, is there such a thing as too much running, and if so, how much is too much?

Well, too much by what standards? There are two flaws you should look out for when you see these kinds of studies. First of all, the best studies are the ones that look at the association between [some exposure, in this case running] and all-cause mortality. If you're reading this post, I imagine it's more likely because you want to know if running will make you live longer, rather than you suddenly worried if your troponins went up after a 5-miler. Studies which use other endpoints (like cardiac markers or signs of inflammation as Thompson et al 2011, or imaging like Wilson et al 2011) might actually be overstating the risks because they're assuming that these things translate into the outcomes that we care about, like longevity, and they might be wrong. (That is to say: yes, Wilson convinces you that lifelong endurance athletes have more fibrotic hearts. Unless we're fairly certain this means they'll die sooner, who cares?) On the other hand, they might not be stating the risks strongly enough - because what if running is bad, and damaging the heart isn't the only way it hurts you? Unlikely though it is, if running is bad for you, and it (at least partly) kills you by messing up your spleen and you're just looking at the heart, you're not going to capture all the carnage.

Second, some studies are limited by non-generalizeable results. That is to say, they look at hardcore ultramarathoners, or they look at the effect of marathons on un-fit people. You might look at these papers and say, "Well, before they told me that, I figured it wasn't a good idea to show up to a marathon without reasonable training, and I also don't run an ultra every month." In other words, how much can any of it be applied to the rest of us?

So that's why I like this paper. In the Journal of the American College of Cardiology Schnohr et al provide all-cause mortality evidence that frequent, strenuous jogging is the same as no exercise at all in terms of mortality benefit. The optimal time and frequency: 1 to 2.4 hours per week; 2 to 3 times per week, at a slow to average pace. The downside is that for many of us traily types, that's very much on the low side. The upside is that those weeks when you only get out 2-3 times? They're just fine for extending your life. I thought this sounded familiar, and looked back over my previous posts, and sure enough Schnohr presented the same conclusion in 2012 at the European Society for Cardiology from data gathered in the Copenhagen City Heart Study. Encouragingly, the mortality benefit he reported in 2012 was on the order of 6 years of extra life!