Yet Another Baby Rattler

Shouldn't be surprising after this hot summer, but I saw another one, this one up in Carlsbad. I've been seeing them all around 630pm on sandy/dusty sections of trail adjacent to grassy areas.

Have you seen one too? Add your encounter to the rattlesnake map! (Below.) Plus it's always available at right if you click on the snake.

It's Still Hot Out In That Peninsular Range

Went up to run Noble Canyon yesterday in preparation for doing a litte group hike there the Friday after Thanksgiving.  Nice run with some actual ferns, but the bugs were bad in the wooded sections and I forgot how annoying the trail is in the upper half.  As in, going every direction but the direction you want to go to avoid minor terrain obstacles, until in the last mile it inexplicably goes up the steepest remaining incline.  Still hot up there!  Take water! 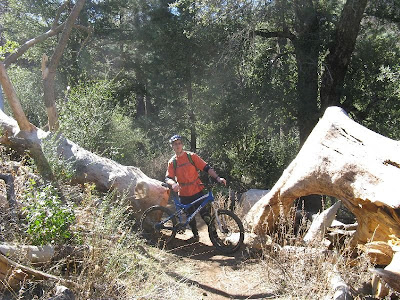 Pundit Tracker keeps those talking heads on TV honest by actually looking at the results of their predictions - and here they are for baseball. The results are about what you'd expect - "The pundits’ collective yield over the three-year period was $0.80, meaning that betting equally on all their picks would have resulted in a 20% loss. Only three of the fourteen pundits generated positive payouts."  More information at the link.
Posted by Michael Caton at 9/24/2012 06:26:00 PM No comments:

Prevention and Treatment of Lightning Injuries

Mark Tanaka helpfully posts a link to a review paper, with evidence classifiers. (If lightning hits you, it's doubtful you'll end up as lucky as this guy.) In SoCal it might not be as scary as in the Colorado mountains in the summer, but it's still useful to know if you spend time outside. You might be the one to save someone's life!

Another Rattler, This Time in Marian Bear Canyon

Saw one during my study break (ie nightly 7-miler) on the trail in Marian Bear Canyon, between Genesee and Regents, about 715pm.  Not surprising after a hot day like today.  Another baby one actually, although compared to the last one I saw a week or two ago, this one was having none of my tomfoolery and went into full-on defensive-posture when I gently kicked dust at it to get it to move.  I added it to the Rattler Map, which is starting to get filled up with people's rattlesnake encounters around San Diego.  Seen one?  Put it on there so we can see where we run across them, and avoid harm for both them and us.

I was thrilled to be present at the inaugural official Craft Beer Debate. Thanks to Omar Passons for conceiving and organizing! To be clear, the question under scrutiny was whether there should be taxpayer funding for a new (privately owned) stadium. The points I reproduce below don't represent the whole discussion - for that go to the Craft Beer Debates website, where they will soon post video. Even if this discussion isn't your thing, Passons has big plans for serious local topics to be discussed at future events, so get on his mailing list!

Greg Koch, co-founder and CEO of Stone Brewing, moderated. Consequently there were lots of pointed questions for the pro-stadium side about the poor beer selection at the games. (Myself, I enjoyed a Scotch ale during the discussion.)

National University economist and major sports fan Eric Bruvold spoke for the no-taxpayer-money side and quickly made the point that stadiums are black holes. Even if you use them as more than just football stadiums, they don't bring dollars in from outside the region, and they certainly don't offset their cost. There have been peer-reviewed studies by economists showing this to be the case.

Mark Fabiani spoke in favor of taxpayer dollars funding the stadium, not surprisingly, since he's the lawyer that works for the president of the Chargers. I reluctantly admired his mastery of rhetoric. For instance, one of the best arguments against a taxpayer supported stadium is that if it's ever justified to use taxpayer money for a private venue, it certainly isn't now, when the city is broke! Before this point could be made, Fabiani co-opted it by saying that old Qualcomm is costing us money already (ahem, sunk cost fallacy) and since the city is so broke, we can't afford NOT to build a new stadium! (He didn't explain why the new stadium will also not cost us money to maintain.)

At one point the pro-taxpayer money for stadium side said that the area around PETCO used to be pretty bad, but now it's redeveloped. During the audience question part, I asked how he knew that downtown San Diego's improvement happened because of PETCO, and wasn't just part of the national improvement that happened in just about every city's downtown during the 1990s. He said he just didn't believe that. Up to you to decide if that's a good argument.

I don't think the audience was overwhelmed by the taxes-for-Chargers argument, and what's more interesting, both Bob Filner and Carl DeMaio are opposed to it. But overall it was a fun night with a lot of good beer and spirited by civil debate. I'm really looking forward to future events!
Posted by Michael Caton at 9/15/2012 09:42:00 AM No comments:

The Inaugural Craft Beer Debate about a new Chargers stadium is this Wednesday 12 September, at 6:15pm at Slater's 50/50.

Thanks to reader Thurston for sending me a great link, an interview of an expert on the economics of professional sports, Roger Noll. Note that this is a pro-free-market podcast, EconTalk, at the Library of Economics and Liberty, so these aren't people that have anything against money or sports. Early in the interview Noll says this:

Baseball and football stadiums...there aren't any that have been substantially subsidized where the local community has received anything remotely resembling a reasonable return on investment. They are financial black holes. Especially football stadiums...What you've created is something that essentially sucks the blood out of a neighborhood...indeed, they create slums.


Wow.  This isn't some opinion jockey.  This is a Stanford economics professor who has spent his career studying these questions.  [Later edit:  I wasn't even looking for it, but the day after posting this ran across another article, "Stadiums Are A Bad Investment".]

The whole interview is worth listening to. Hope to see you Wednesday night, although this event will fill up so go to the Debate website and register.
Posted by Michael Caton at 9/09/2012 09:59:00 PM No comments:

Most of us who spend time on trails around here have seen a rattler or three. I just saw one tonight, a cute lil baby one on the side of the trail in Los Penasquitos Preserve. Most of the time our sense of where to be most cautious is informed partly by anecdotes, but if we share this information systematically, eventually we'll start to see where the hotspots are (and at what times of year) and both species can stay out of trouble.

The map is up and right now the oonly thing it's missing is YOU, i.e. it needs more user-generated data. If you've seen one or two or ten on trail or in your yard, take 20 seconds to go to the map and add your own.   The community appreciates it!

By Pat's Backcountry Beverages in Alaska.

Craft Beer Debates is a great idea - providing a venue for people to discuss important questions in a passionate but friendly way. Importantly, over good beer. Per the title, here's the first topic to be discussed, with some good links. (Hopefully the companionship that drink creates will overcome the zealousness.) The first official debate will be at Slater's 50/50 off Rosecrans near Point Loma on Wednesday September 12th. The debgate will be moderated by the CEO of Stone Brewing.

Those are all the details I have right now, but I'm planning on going. Say hello if you recognize me from the blog. Be not confused, for I no longer have a goatee.

An open debate like this is a real nightmare for the proponents of the new stadium, because these kinds of deals usually go on well out of view of the public, since they benefit politicians and franchise owners at the cost of tax revenues sorely needed for schools and services. Build whatever stadium you want to. Just not with taxpayer money. Other people don't have the right to demand our money for their sports teams. Imagine if the city wanted to support a Mexican Soccer League expansion team with your cash. Not so great? Agreed! And this applies to ALL private enterprises, sports or otherwise. What's worse, building a new stadium doesn't bring in economic benefits to the city.
Posted by Michael Caton at 9/03/2012 04:37:00 PM No comments:

Link of the Day

If you're bored of normal tourist destinations, check out Atlas Obscura. They end up being mostly outdoors and natural things. Nature is usually more unexpected than things other humans do. Except when it's not, because one of the articles on the front page is about an island in the Canaries where the pastoralists have developed a whistled language.
Posted by Michael Caton at 9/02/2012 09:25:00 AM No comments:

I thought it would be fun to head up to Carlsbad for some wine-tasting today and since I've lived here 3 years and never used the Coaster, I thought today would be the day. Like many urban "transportation" systems, the Coaster likes to put obstacles in the way of people who want to use it.

1) The cost-benefit, on all fronts, comes down on the side of driving. (See table below.)

2) The last train south from Carlsbad is at ***6:40pm***. Great! Let's have dinner at 3pm so we can plan our day around Coaster! Said nobody ever, much to the chagrin of Carlsbad merchants (and people who want to enjoy Carlsbad without risking a DUI.)


Here's that cost-benefit.  All numbers are round-trip for two adults:

*It's ridiculous that both of the asterisked numbers are not zero or very close to zero.  30 minutes driving and $3.20 in gas to use the train?  How am I supposed to take this system seriously?


So, Coaster is asking me to spend $17.70 more money, an hour and thirteen minutes more time, all so I have to leave by 6:40pm after nervously glancing at my watch all day.

I really want San Diego to have better public transportation. But the Coaster is not it. Realistically, it's very hard to expand (let alone begin) a train system in an expensive developed area.  On the other hand, a real bus system is not that expensive or difficult to put in place, which is why it's so mystifying that to get to my house (in non-isolated UTC) from the airport, it involves two bus rides and a 1.5 mile walk between two stops. So San Diego:  if you want people to take public transportation seriously as an option, and I do, you have to stop making it difficult to use, and at the very least make it go where and when people need it.
Posted by Michael Caton at 9/01/2012 02:55:00 PM 2 comments:

Why Lie About Your Marathon PR