Yes, the Horseshoe Trail and French Creek in Berks County, Pennsylvania, where I was back for the holidays. I had read about the Horseshoe Trail and was all fired up to run a good section of it early afternoon on Thanksgiving. So I start in French Creek, come out the western side and cross Geigertown Road, where the yellow blazes clearly show that it continues up the driveway of the South Birdsboro Archery, Rod and Gun Club.

There were active shooters using the range, 2 men and a boy. Wanting to be safe and polite, I approached them between volleys to make sure that was the trail. "No, the trail goes into the park." "I know, I just came from the park. The trail is blazed and crosses Geigertown Road here." "No, those yellow blazes are for archery practice," he insisted (repeatedly). "Well then why are they exactly the same as the ones marking Horseshoe Trail in French Creek?" "I don't know what to tell you. We've had problems with people thinking they can hike here. Don't be one of them." Not one to argue with people with guns, I decided to cut my run short.

Needless to say, I was disappointed, not only for myself (I'd been looking forward to running this trail literally for months) but for the people who maintain and support the trail, which I know is a lot of work. I emailed the trail commission but it's difficult to give the benefit of the doubt to these guys when the trail is so clearly blazed, which means by extension that they were clearly lying to keep me from using the trail.

Fortunately, there were no such problems on the Appalachian Trail near Port Clinton, where the Schuylkill River emerges from the "front range" of the Appalachians: 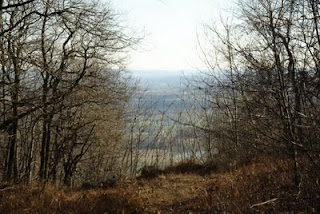 It was interesting that even from one end of Berks County to the other (Port Clinton to Morgantown) there was a difference in small-vegetation greenery surviving this late in the season. The turnpike still has a fair number of green leafy bushes which were nowhere to be seen up in Hamburg.
Posted by Michael Caton at 11/30/2009 01:03:00 AM 2 comments:

My Thoughts on the Chargers Leaving San Diego

In doing my homework for my upcoming weekend hikes in San Bernardino Natl Forest and Mt. San Jacinto State Wilderness, I was fortunate to run across the extremely knowledgeable and helpful Allen Riedel, whose books 100 Classic Hikes in Southern California and Best Hikes with Dogs in Southern California are indispensable. Also check out this great hiking site.

With so many friendly people giving advice, I'm finding it hard to maintain my snobby Northern California stereotype of Southern Californians. Come on guys, start talking about your tan or something! Anyway, here's looking forward to hiking 'mongst actual trees.
Posted by Michael Caton at 11/06/2009 05:46:00 PM No comments:

For added fun: imagine reporting that one to your local Al Qaeda commander, or explaining how Allah let this creature triumph over his "warriors". NICE, and by that I mean TOTALLY NICE!
Posted by Michael Caton at 11/04/2009 10:01:00 PM No comments: