The Chargers Stadium: Suddenly They Want to Talk About Intangibles

Below: as Chargers fans explain, even if a stadium isn't actually a good investment, there are much more important things on the line here - like the winning history and most of all pride of this successful organization which we just can't afford to lose. 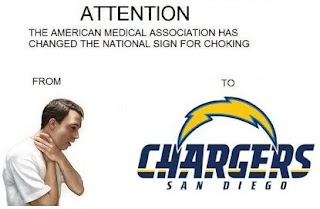 The Chargers want a new stadium in San Diego. The Chargers have traditionally argued that asking for taxpayer money is justified, because stadiums are a good investment. Actually, "argued" is a strong term; more like, they've repeatedly said it quickly, out of the side of their mouth in a press conference with no follow up questions.

Unfortunately for the Chargers and the NFL more generally, this discussion has generated open debate, and the facts that keep surfacing are consistently clear: stadiums are bad, bad underperformers as investments, and/or as tools to bring outside tourist dollars into a city. That is to say, if there were a little league of investments, you'd have to have a heartbreaking talk with stadiums and their parents and say, "I'm sorry, but little Stadiums here just isn't cut out for this game, and not everyone gets a trophy." From an article at the St. Louis Federal Reserve website:

Very little evidence exists to suggest that sporting events are better at attracting tourism dollars to a city than other activities. More often than not, tourists who attend a baseball or hockey game, for example, are in town on business or are visiting family and would have spent the money on another activity if the sports outlet were not available.5

Economists Roger Noll and Andrew Zimbalist have examined the issue in depth and argued that, as a general rule, sports facilities attract neither tourists nor new industry. A good example, once again, is Oriole Park at Camden Yards. This ballpark is probably the most successful at attracting outsiders since it is only 40 miles from the nation's capital, where there is no major league baseball team. About a third of the crowd at every game comes from outside the Baltimore area. Noll and Zimbalist point out that, "Even so, the net gain to Baltimore's economy in terms of new jobs and incremental tax revenues is only about $3 million a year—not much of a return on a $200 million investment."

(To stress the point - BALTIMORE IS THE BEST CASE SCENARIO FOR A STADIUM! 3 million a year for 200 million? What is this, socialism?)

So what does this mean? It means if you still want a new stadium you have to abandon the old approach. The pro-Chargers commenters on articles like this excellent one in the Union-Tribune are suspiciously astroturfy. Suddenly, it's all about "History! Culture! If you disagree you're not a real San Diegan!" That's typically the turn a discussion takes when all the facts are against you. (And if you seriously want to take that angle - San Diego is a city for winners. WINNERS. By that I mean, NOT the Chargers. You don't fit here guys!)

The thing to remember is that governments know that there are people who, let's be blunt, will bend over and do whatever they had to in order to keep their heroes from leaving the city or they'll cry their little eyes out, and these people would oblige the rest of us to do the same. And these people show up at election time, as the mayor of Seattle once found out when the Supersonics left. Let's not let this happen again. If you oppose government subsidies for the Chargers, then at election-time, reward the politicians who represented your views. Otherwise, why do you expect them to listen to you?


The consensus among economists is to oppose sports subsidies