I used to think that all the interesting stuff was in Northern California, but I've been awakened twice by earthquakes in the last week (bringing the total to three in the 11 years I've lived in California). Until I wrote this post I didn't even remember that there was already unusual activity in Mexicali 3 months ago.

What I would like is some script that collected the little squares on the USGS maps over time so I could make an animation showing how they cluster and migrate and trend over a year or more (like a time lapse weather map), but to do that I'd have to know something about Java thingies. [Added later - turns out that USGS does have this; see it here.]Link to live USGS map here; below is a static screenshot of the CA-NV map as of 12 April 10. There's normally not even close to that much activity in extreme southern California. 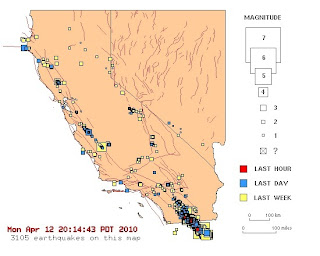 I also wonder if over a period of a year's time, the total joules released by plate movements around the entire planet changes significantly. Living in the Western hemisphere (Haiti + Chile + Mexicali), it certainly seems like 2010 will be such a year. I bet these papers have been put together somewhere but what's the geology equivalent of Pubmed.gov? I'd also be curious what the standard deviation is for global seismic wattage (total joules released by all earthquakes per year), and what time period you have to drop down to before the standard deviation increases to, say, 10% of the average. If you run across this post a know where this data is, please point me in the right direction!
Posted by Michael Caton at 4/12/2010 08:16:00 PM