tl;dr Scroll down to the Big Ben/Houses of Parliament pictures.
For the Canary Islands part of the trip go here. For the Morocco part of the trip, go here.
We were barely there. But, as we couldn't get a more direct flight to the Canaries or Morocco, we figured we would take a day in both places.  At first I viewed it as an opportunity for me to see how the city had changed since the last time I visited (when I was 19!) although in truth I think my differing reactions have a lot more to do with how I've changed.  I realized that despite being an American from the Northeast, London is actually the first city I ever explored on my own, anywhere.  (I was a suburban American from the Northeast who grew up in the 80s.)  I was such a hick that back then, I didn't know how to react and had nothing to compare against, so I guess I just assumed that cities were like London.  What I did and saw this time:


The Prime Meridian and Another Stupid Running Project 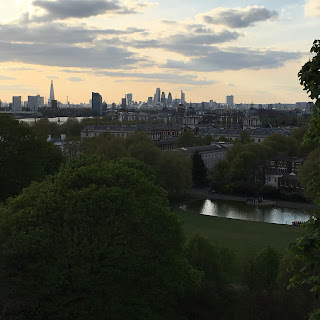 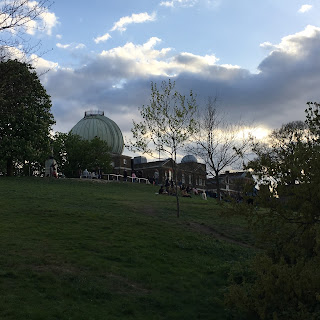 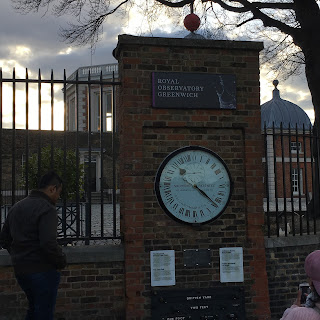 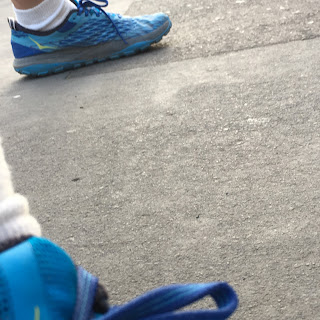 Immediately above:  since the observatory was closed for tours, and there is nowhere the line is marked on the ground outside the observatory, I had to go to a spot on the Meridian as shown by Google Maps.  It's surprisingly hard to take a selfie of BOTH your feet in a wide squat.  (Wide, to ensure that even if I was off by a foot that I was still standing in both hemispheres.)

Having bestrode the very hemispheres, my liege! I moved on.  London is of course a city where you can stumble across things. I stumbled across a random Soviet-looking tank in a little neighborhood (art installation, or poorly disguised crypto-history artifact?) as well as the Michael Faraday Memorial, which is indeed a Faraday cage on a traffic circle. 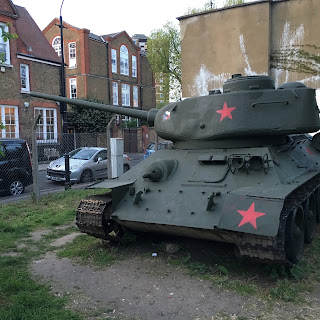 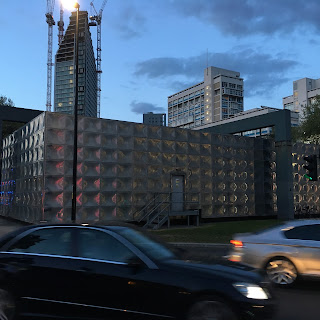 I also went to Bedlam, the bad old psychiatric "hospital" (really, dungeon for mentally ill people) which is now the Imperial War Museum. I often collect a fragment of the building but as it is of characteristically sturdy construction, also there are cameras, I instead took some of the ubiquituous spring cherry petals, in honor of the many sick people trapped inside over the centuries, who must have seen the blossoms come and go for many springs and just longed to be outside in the sun for a moment.  I deliberately went to Bedlam due to my specialty, but oddly the Faraday Memorial is quite nearby and both bear directly on my career. 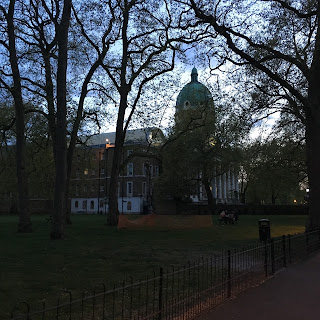 My pictures don't do justice to how breathtaking it was to come across the Westminster Bridge and see Big Ben and the Houses of Parliament at dusk with the lights reflected in the Thames. It's rare that architecture affects me in this way. 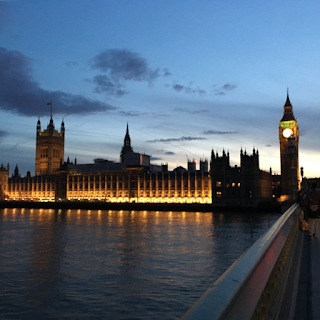 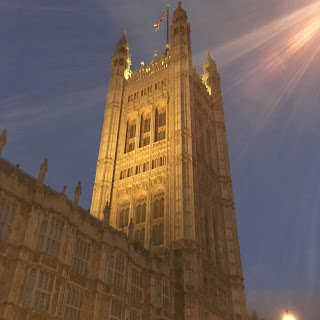 I thought about buying gulabjamun near East Aldgate station, the original place in 1994 where this jerk introduced me to them and immediately addicted me. In fact he is the source of many of my other bad habits as well: Taco Bell, Danzig, Bad Religion, and becoming a doctor.

The photos below of the Tower of London and London Bridge were taken the first day.  Old Bill Penn was a prisoner there at one point.  When I was 19 I was leaning against the nearby city wall when our tour leader told us the Romans built it, which had quite an effect on me.  On this day, a very annoyed local runner was trying to take advantage of the nice spring weather and could literally not get across London Bridge.  And to think I get annoyed by the "crowds" on the Golden Gate. 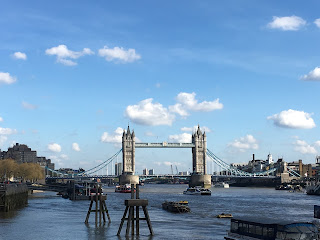 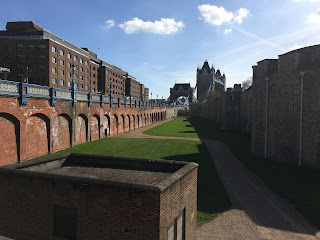 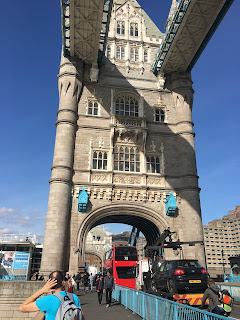 Added later:  wanted to mention that as usual with flights from Europe to the West Coast of North America, we went over some pretty high latitudes.  Since it was quite clear for the North Atlantic we saw a lot of inland Greenland and the icy Davis Strait between Greenland and Baffin Island.  Much more than deserts, this always strikes me as the closest thing we see to an alien planet on Earth.  Deserts have a bit of chlorophyll here and there if you look.  Cells require liquid-phase water, absent for most of the year in these places.  Hudson Bay was covered with nearly circular pieces of ice in varying sizes; I wondered about the physics that produces this distribution (but not enough to try to figure it out or look it up.)  I should've taken a picture as I'm not finding images online that really show what it looked like.  I used to have a strange obsession with Hudson Bay but I think having stared at the thing from cruising altitude in between episodes of Westworld, I've been cured.  We crossed back into American airspace over Whitlash, Montana with a mere 2.5 hrs to go in the flight. The clouds in San Francisco were easily the dreariest we'd seen during the whole trip, including in England, which is a big problem.

NEGATIVES:  I post only in the hope that the information will be useful to foreigners traveling in the UK and London specifically.

Ryanair. The 4.5 hour flight from Stansted to Gran Canaria was a vision of hell worthy of Dante. I'm not complaining about Ryanair's charge-them-for-breathing business plan, since we knew we were signing up for that. Rather, it's the passengers Ryanair seems to select.  At the risk of being a bit direct:  Ryanair's passenger base are a drunken host of zombie chavs, a gelatinous pale mass of misshapen tissue that made the airplane scene in World War Z look like a Victorian cocktail party. I've never seen trash (actual physical trash, not a joke) accumulating stadium-like in aisles, and I shall neglect to describe the bathroom conditions as the lightest word would harrow up thy soul. I have also never seen such badly behaved children with no attempt made by parents or crew to control them; on the plus side, at least the English can be sure that their jumper-wearing bleating little primates cannot become any more animal-like, because they have fully regressed to (at a best guess given their hygiene and shrieking) Australopithecus.  While I tried to keep my eyes closed for the duration of the horror show, my wife reports to no one's surprise that the passengers were also extremely ugly.  A final misery was the flight crew's pitching of ham sandwiches as if they were the greatest thing the peasants would ever taste, which sadly actually seems plausible. tl;dr We don't like Ryanair.

I hate to say, but (again) people on the Tube are the rudest on any public transportation system in the world. For example, at one point my wife was actually shoved, unnecessarily, by a woman who didn't think she was moving fast enough. (This is the same woman who had previously tried to warn me about people on the subways in China; they actually turned out to be quite reasonable. In Japan people ignore you, which is also perfectly acceptable.)  Also contrast with Paris, a place I've visited more often than London, and whose citizens I have found on repeated visits to be unfailingly polite and helpful. In fact I have a theory that it's Londoners who spread these rumors about Parisians...

English public transportation is substantially less reliable than I remember. Both days we were there, we were delayed by signal failures or track work. And this turns out to be the rule on the weekends - because of all the work they need to do on the weekends, it's often very difficult to get to where you need to go. For example, for a route from our hotel in Westminster to Greenwich, neither the official system website or even Google could figure out better than a 90-minute, 15-pound, four-transfer mess (to go 8 miles!) But after scrutinizing the map for a few minutes, I found that the Jubilee Line would take me from Westminster to North Greenwich in 14 minutes for 5 pounds. Seriously Tube website, you couldn't figure this out?