The usual nonsense. (Lots of stuff just in Berks County outside of Philly, go here for a list.)

PHILLY
We hit Pat's Steaks the night we landed, but I'm still a Jim's guy. On the way into the hinterlands I visited the oldest building in Berks County, built by Swedes who had ventured up the Schuylkill to build the first stone structure (Morlatton House ca. 1716), three decades after William Penn's ride up the icebound river to negotiate with the locals. Daniel Boone would be born not quite 20 years later a couple miles further up the road. My inevitable surprise in Berks County though is Blue Marsh, whose prettiness somehow still shocks me. Also, I"m now so old that I an't remember how to find the Cliff without looking online. I did a very nice 6-miler just from the Cliff to the Heidelberg Bridge in Bernsville, and needless to say I can't just enjoy it for what it is so next time I have to run around the thing. 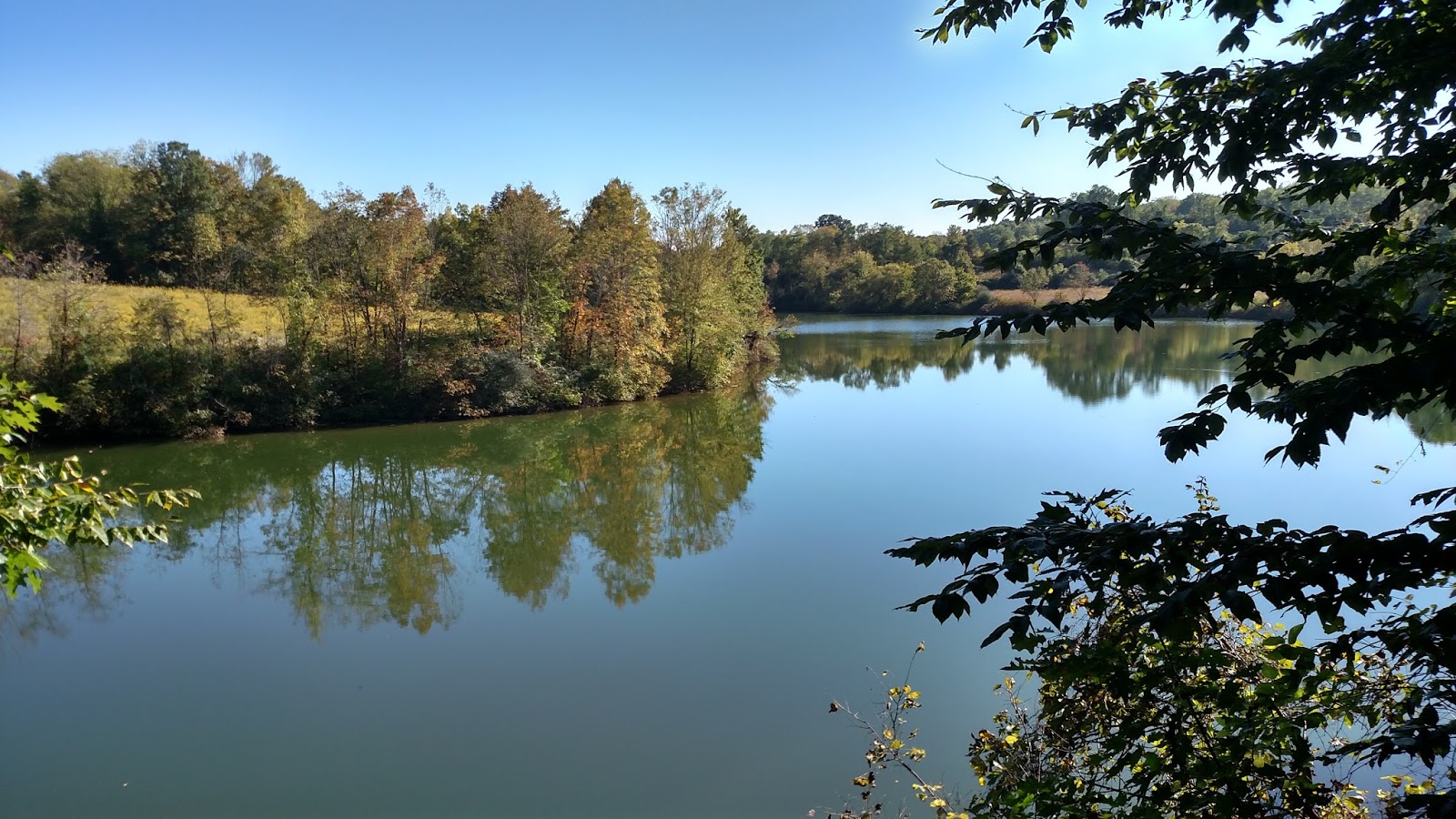 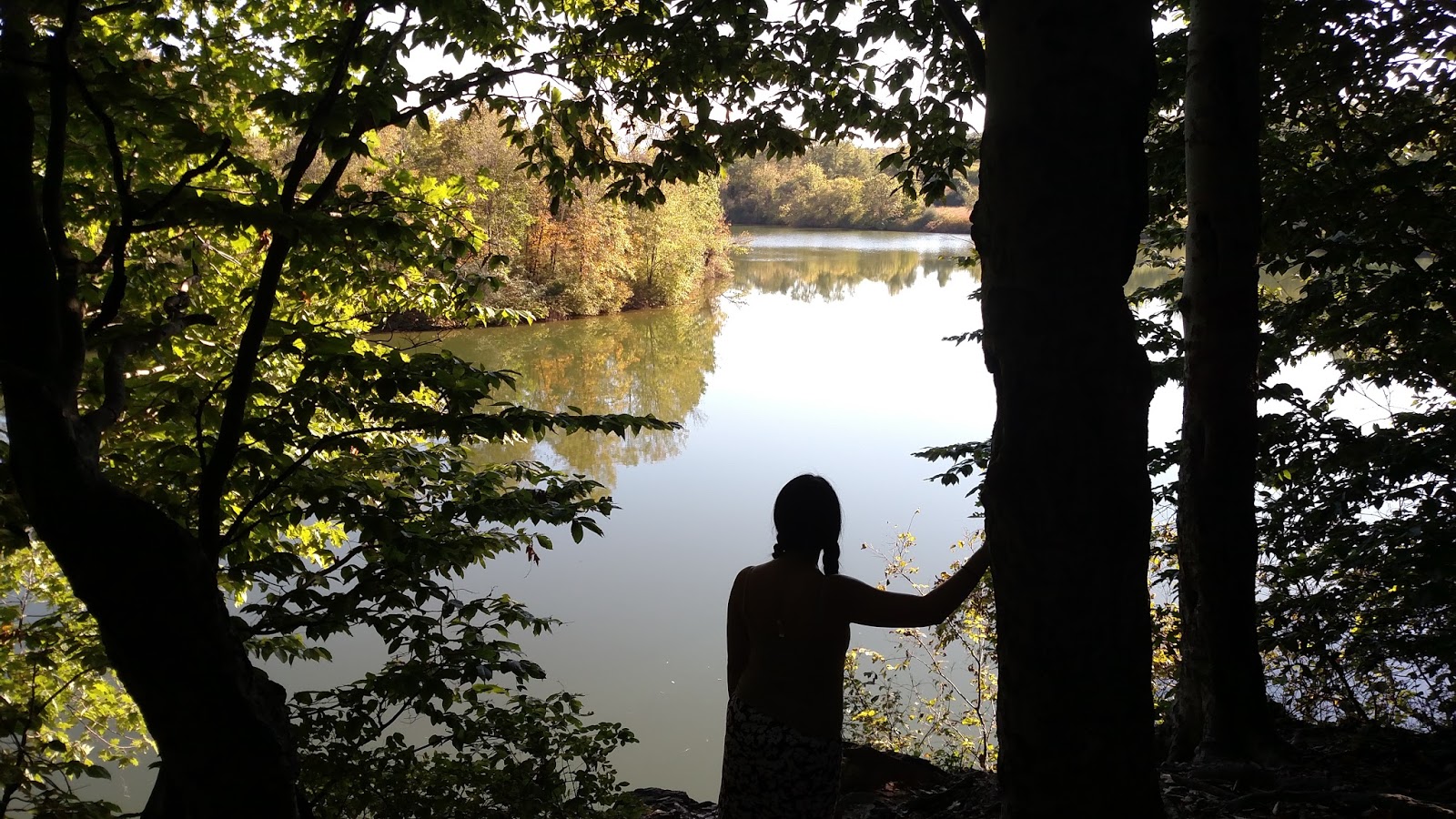 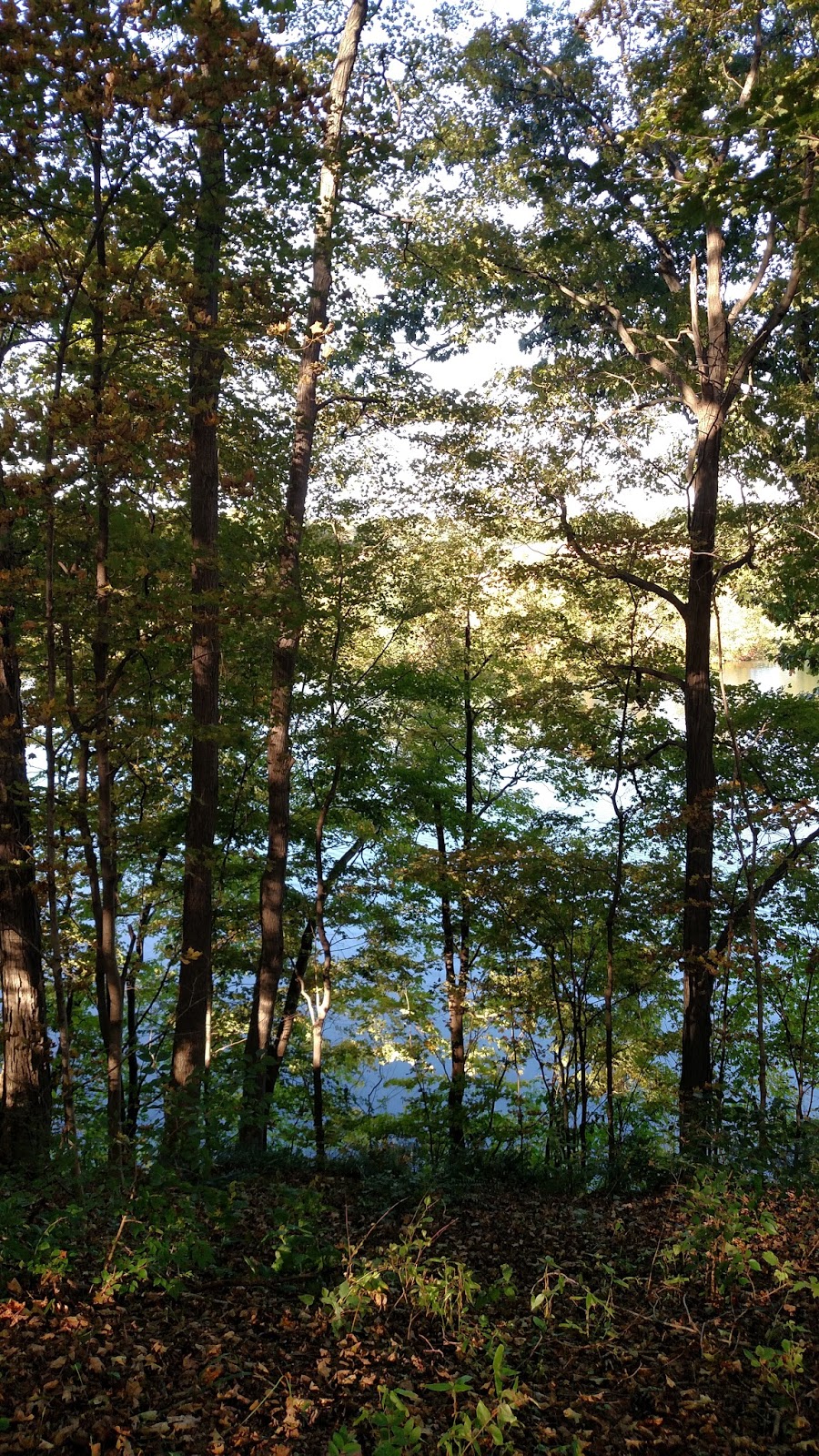 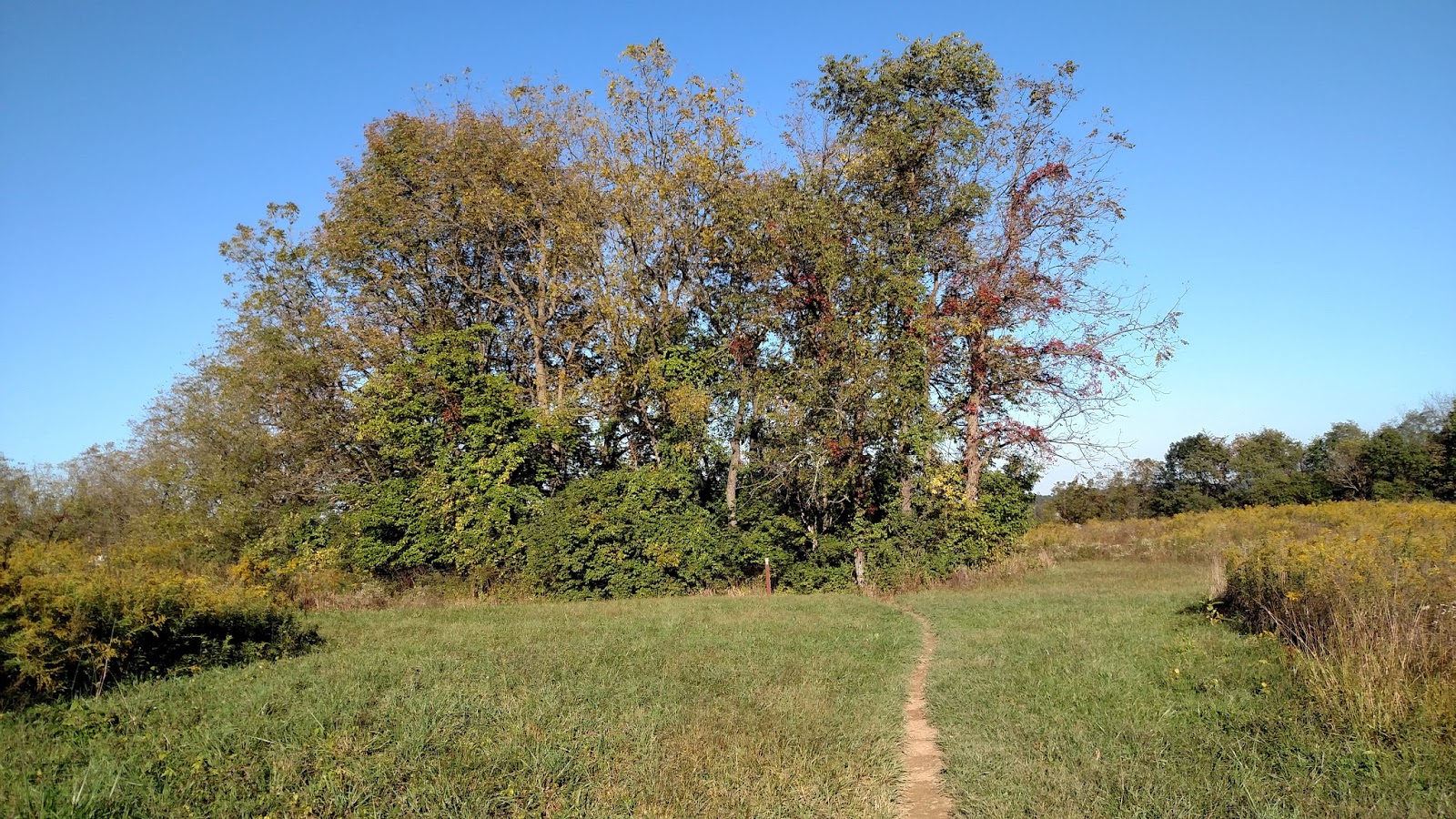 STATE COLLEGE AND CENTRAL PENNSYLVANIA
I wasn't nearly the trail maniac in college that I am today and regret that I didn't spend more time exploring Central PA (Allegheny National Forest for one thing.) It was fun getting to State College but it's been long enough that I'm quite ambivalent about these visits and in truth I'm not even nostalgic anymore, since PSU doesn't feel like it's "mine". I knew this was very likely my last visit and it was a nice swansong. I got into the Rathskeller for a beer in honor of my dad. I foolishly didn't drink in college so, oddly enough for an old alum saying goodbye, this college staple was actually a novel experience for me. (Worry not dear reader, I stopped that nonsense and now I drink quite heavily.) 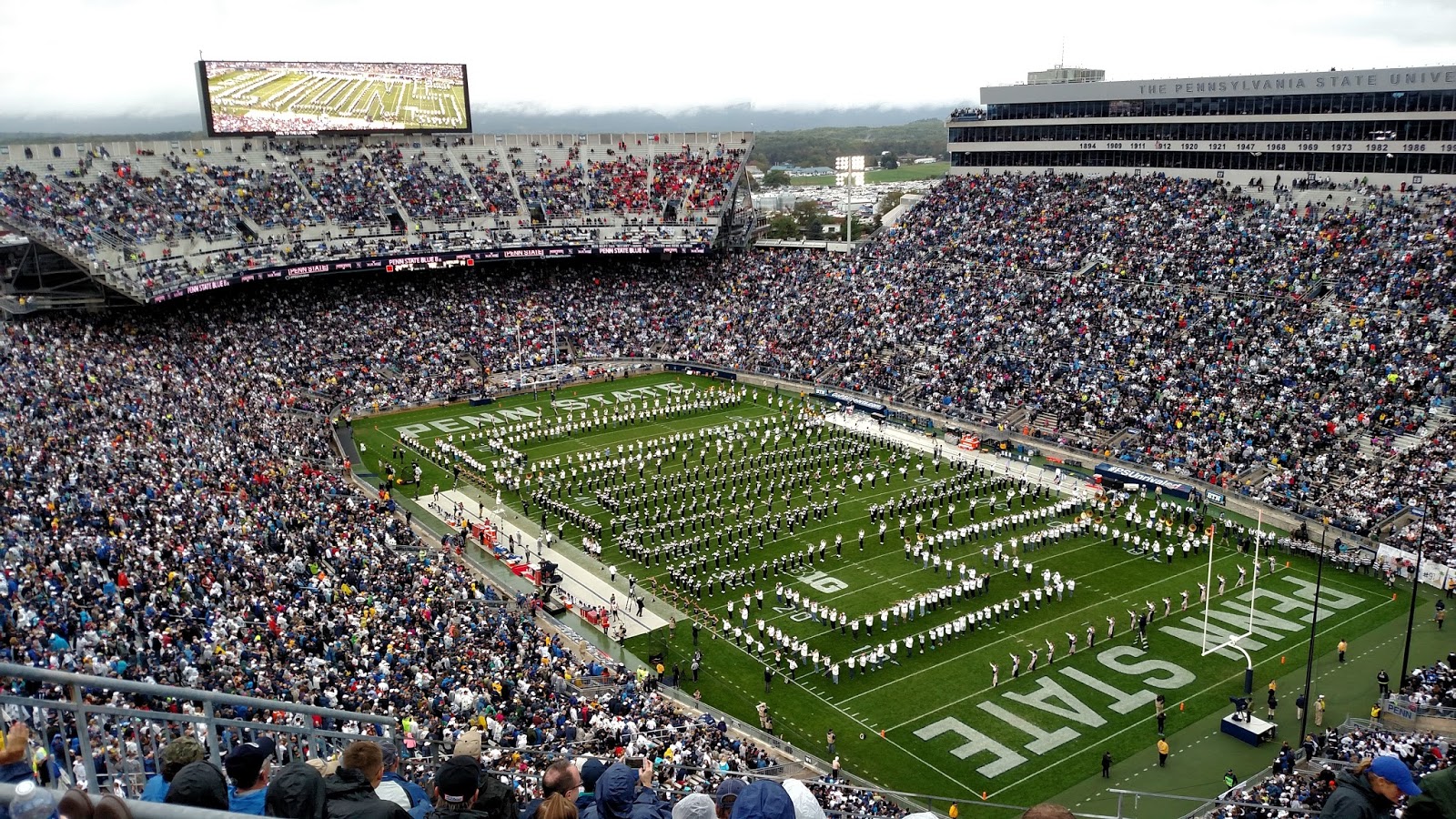 After the obligatory crowded post-game-day hike up Mt. Nittany, we headed down to the area between Huntingdon and Mt. Union to bag the Thousand Steps. Also very busy! A part of the nifty Standing Stone Trail, I've had this one on my bucket list for a while. I recently became obsessed with the Allegheny Front and Plateau, and noted how north of the PA Turnpike, the escarpment gets steeper as it ascends rather than rounding off as the ridges to the east do. The boundary between Alleghenies and Ridge-and-Valley in PA is also the watershed boundary between the Atlantic and Gulf of Mexico. There is very little conserved land right along the front and this is a fascinating and unique area of Pennsylvania and the Northeast generally. 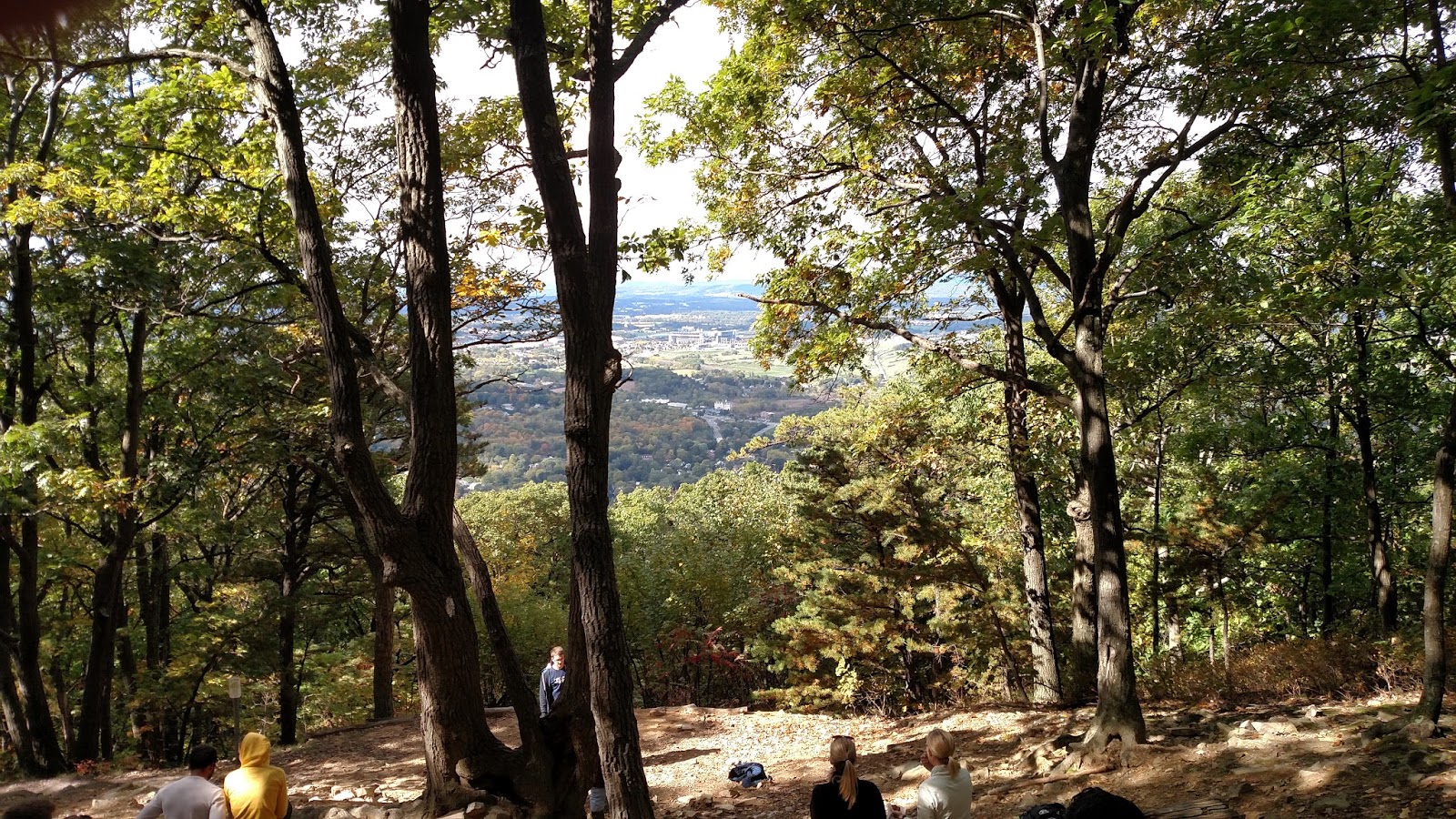 Above and below: view from Mt. Nittany; second is zoomed on Beaver Stadium. I never learned if it was really true that every seat facing Mt. Nittany had to be able to see it. (By the way, did you know they already had the Nittany Lion in Tang dynasty China? See if you can find it in the photos here.) 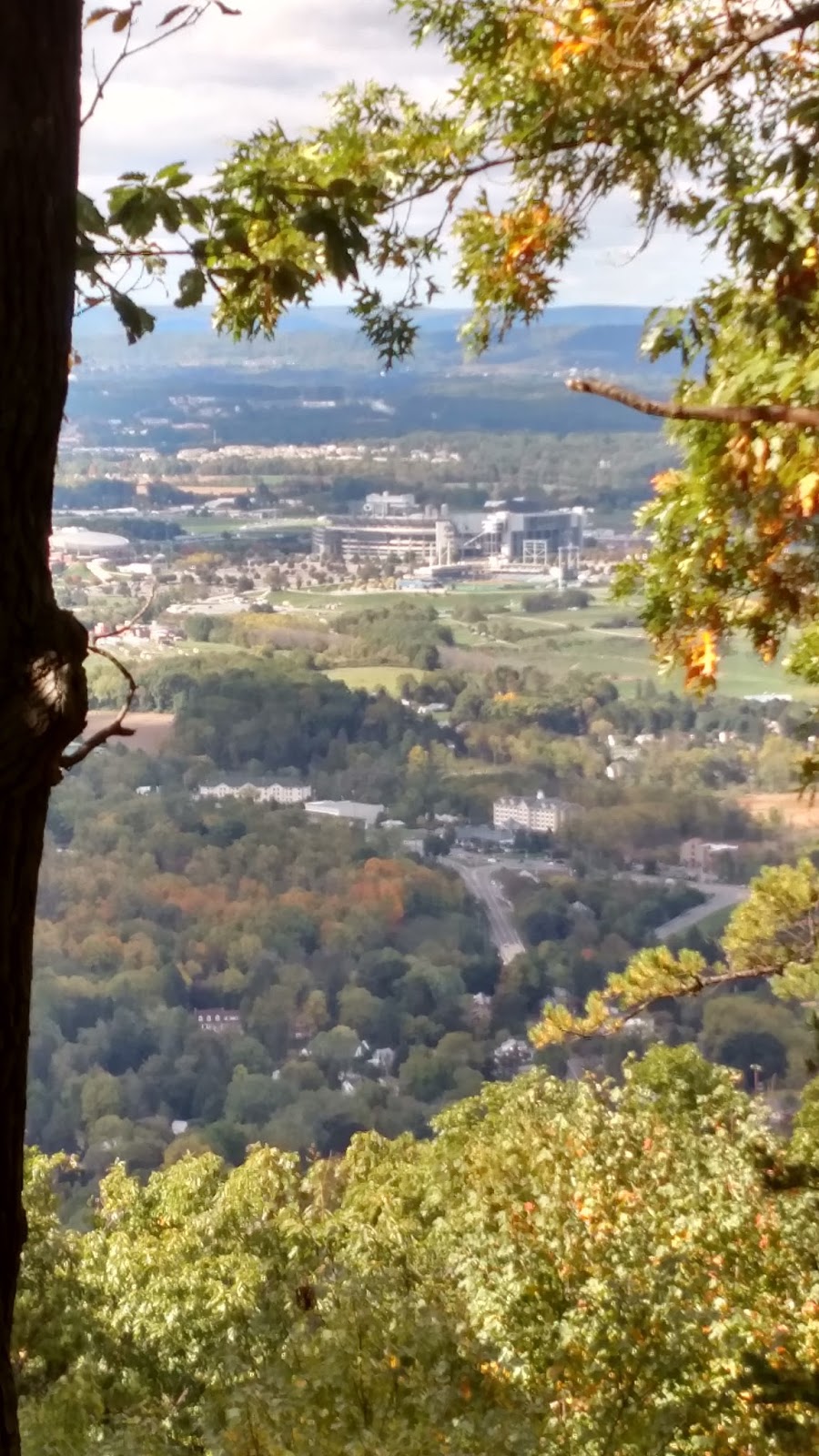 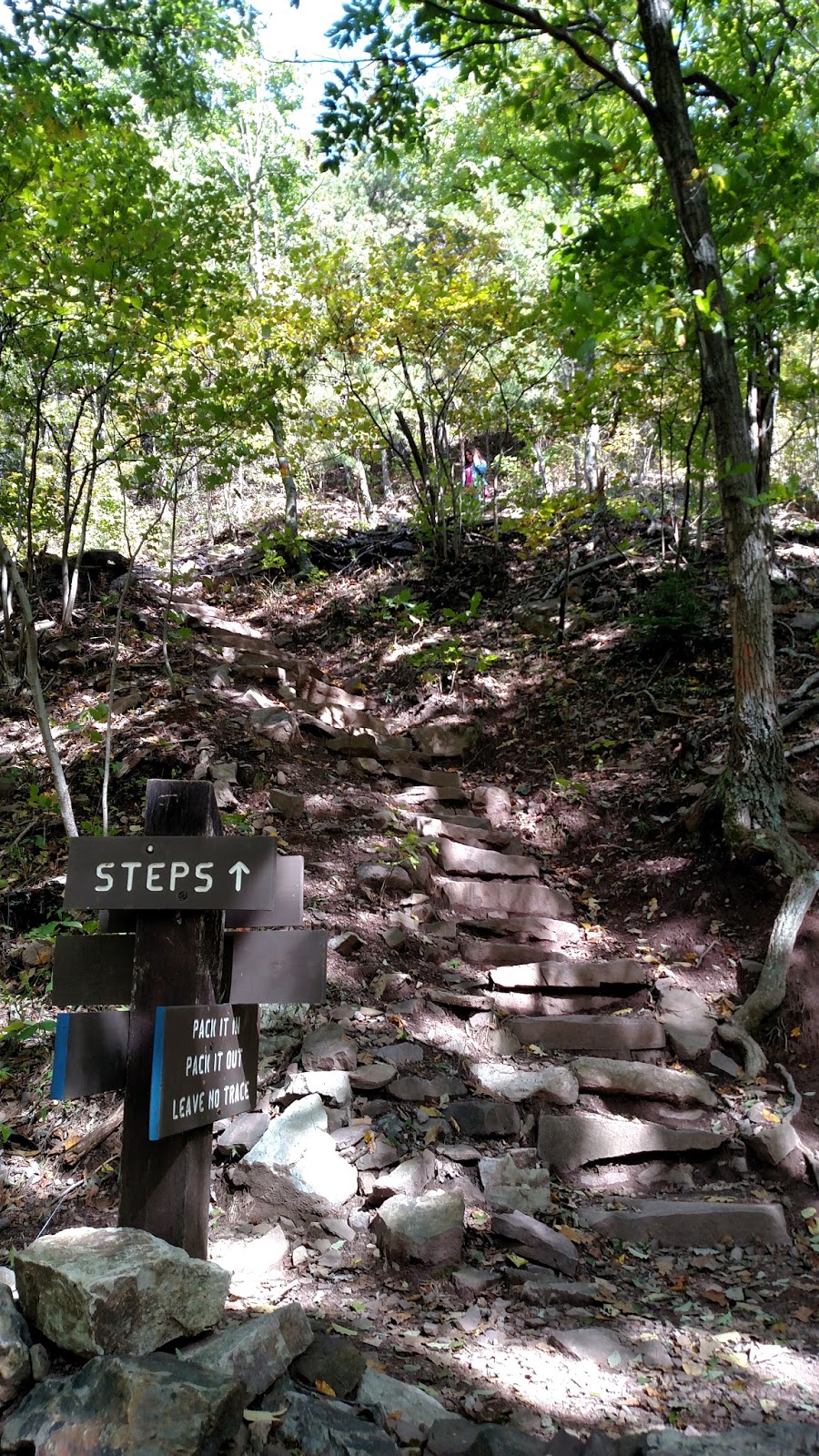 Above: hey THANKS.
Below: view from the top of the Thousand Steps. 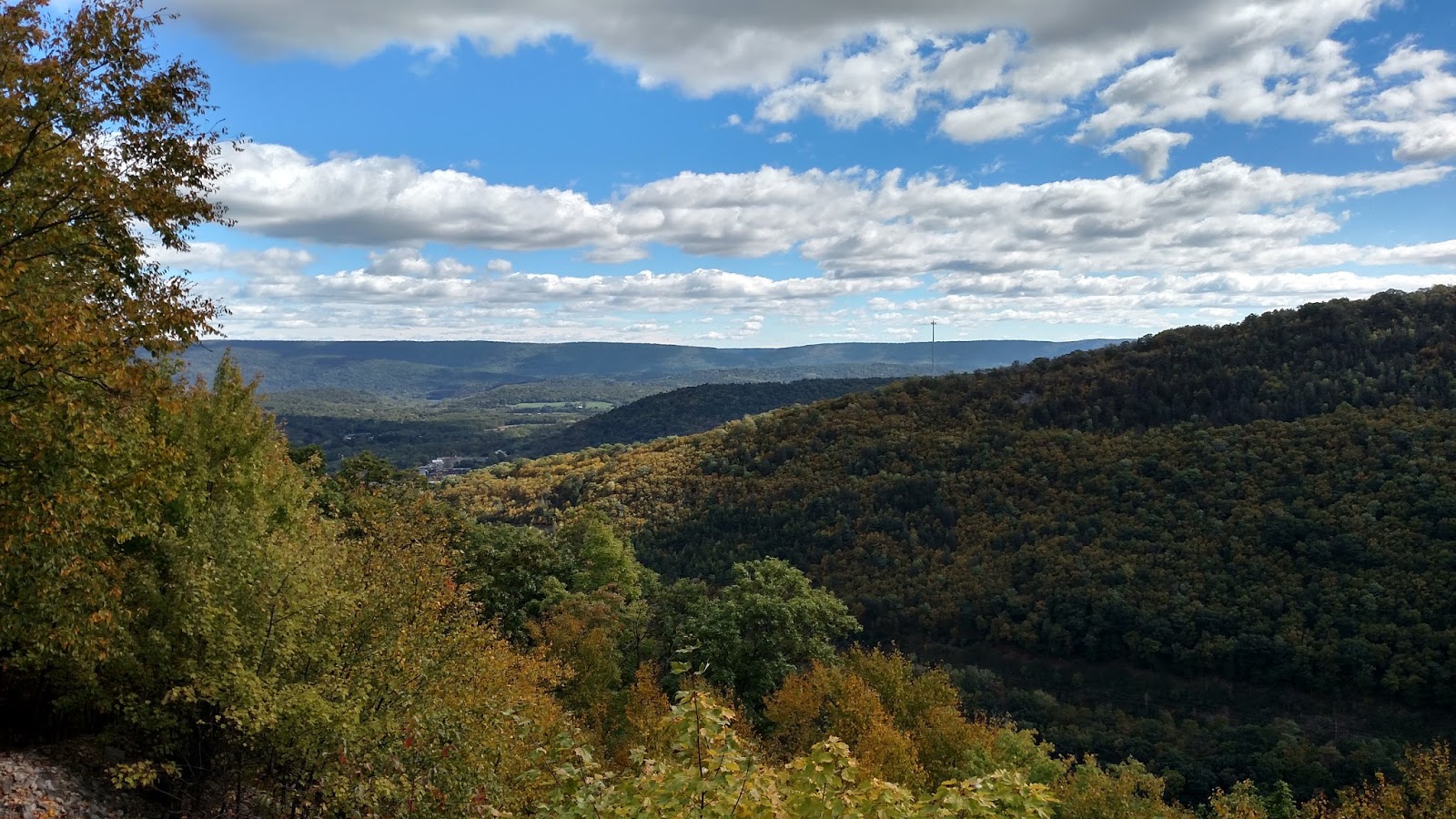 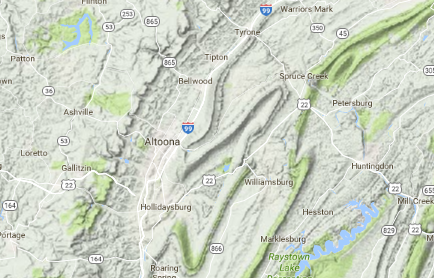 Above: you don't have to be a geologist to see the Allegheny-Ridge and Valley boundary here. The Turnpike climbs onto the Plateau between Bedford and Somerset, fittingly enough where you pass through the Allegheny Tunnel. The Flight 93 site is nearby (already been) and there's a cave in nearby Mann's Choice with coral fossils from the Paleozoic but dammit it's privately owned and hardly ever open.

Above: the Allegheny Front (in red) is also the boundary for central PA dialects, not unexpected as people's travel would historically be impeded there, and the differing geology has probably led to different economic activity. Nice illustration of the principle that geological barriers obstruct both gene and meme flow. Below: another box checked: view from the top of Mt. Davis, the highest point in Pennsyvania, at 3,213'. Yes, lower than Foresthill. But still neat and felt very plateau-y. 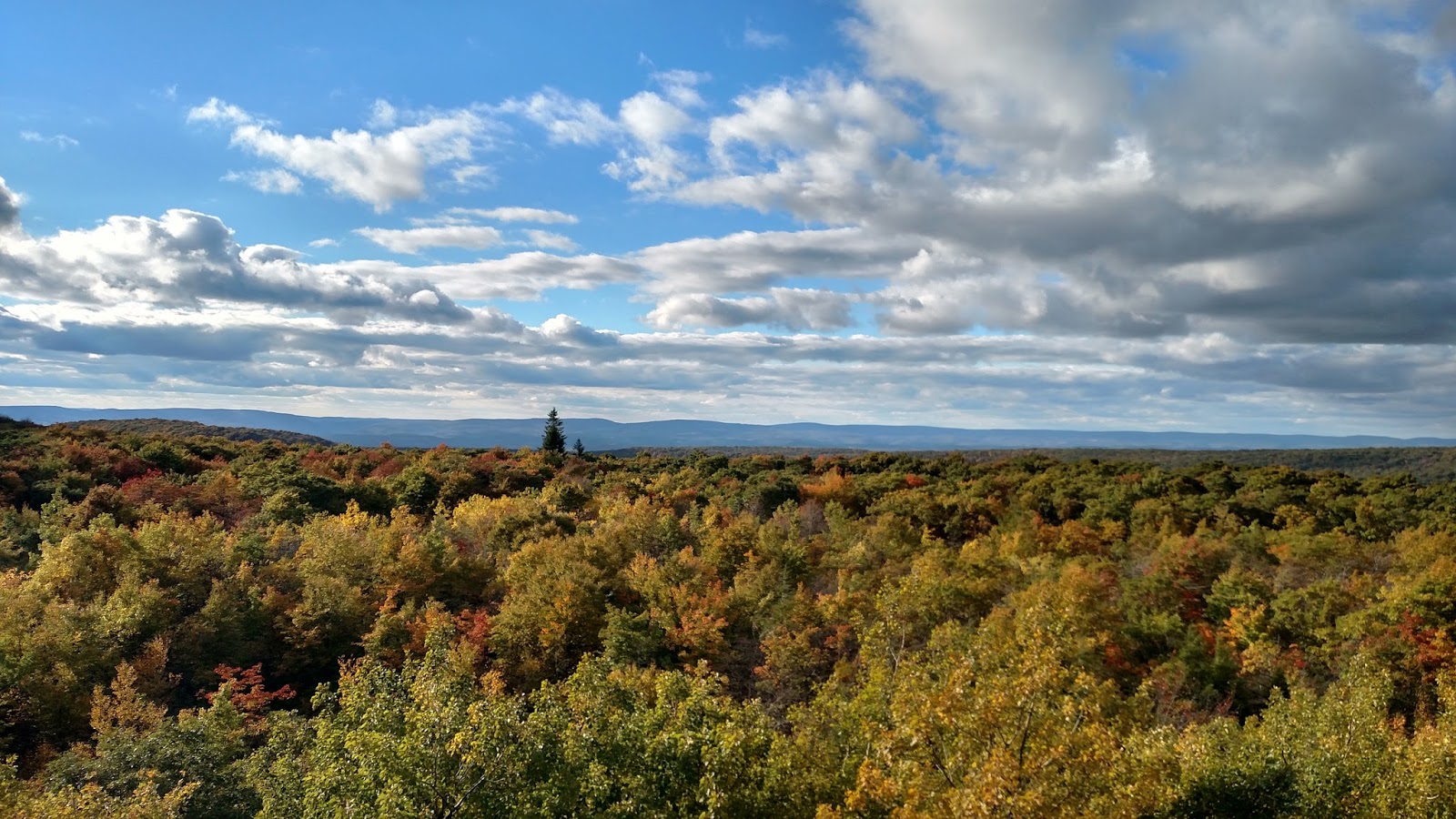 Another point! The PA-MD-WV tripoint! I'd previously seen Fort Necessity (where young George Washington learned the value of guerilla warfare from the French), Wright's Fallingwater, and Ohiopyle rapids, and my travel companion was satisfied merely hearing the eloquent orations I delivered on these and many other topics during the drive. Unknown to me until this visit: a few miles from Fallingwater is Kentuck Knob, another Wright home. (And very unpatriotic of me to say, I saw a restored Qing Dynasty official's home in Chengdu, Sichuan, China, that I thought was much cooler than Fallingwater; scroll down here for some pics.) For a while I have been scheming to run up Mt. Summit, the face of Chestnut Ridge, the very last of the Allegheny-Appalachian system as one heads from the East Coast into the Midwest - but there is no safe way to do it. Yes, the local club holds a race once a year where (I verified) they run up the highway - not safe! - and there's a road that comes up the back way right past where Washington (or his native ally) killed the French officer Jumonville that sparked the Seven Years War (or the true first world war, depending who you ask). Either way, also not safe. 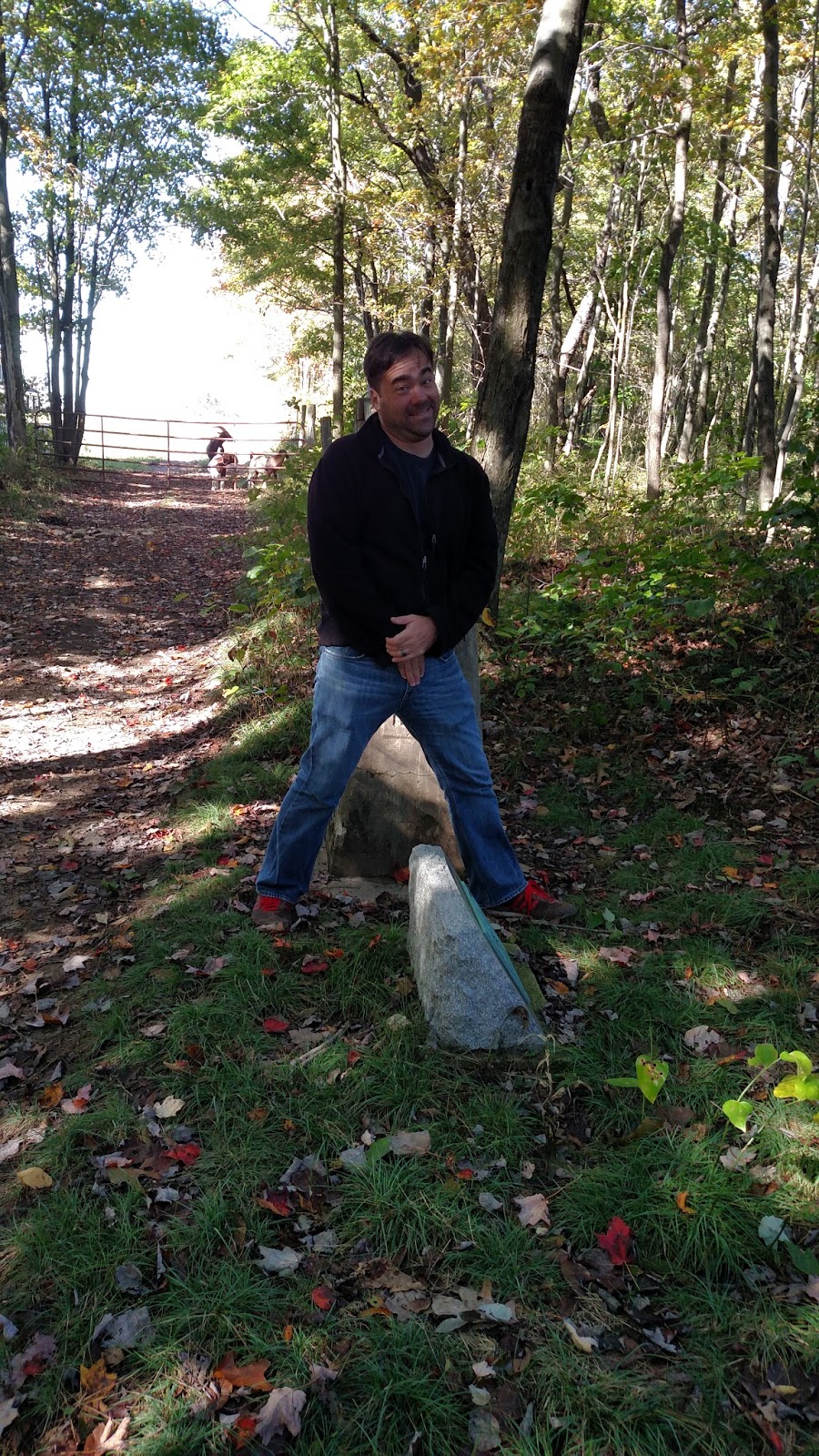 Above: your blogger at the tripoint. In the background are West Virginia border guards, who scrutinized our entry papers closely, and then ate them. Below: Mt. Summit Hotel at the top of Chestnut Ridge, the edge of the Alleghenies, looking west over the start of the plains. Washington's French-killing spot is about three miles from here. 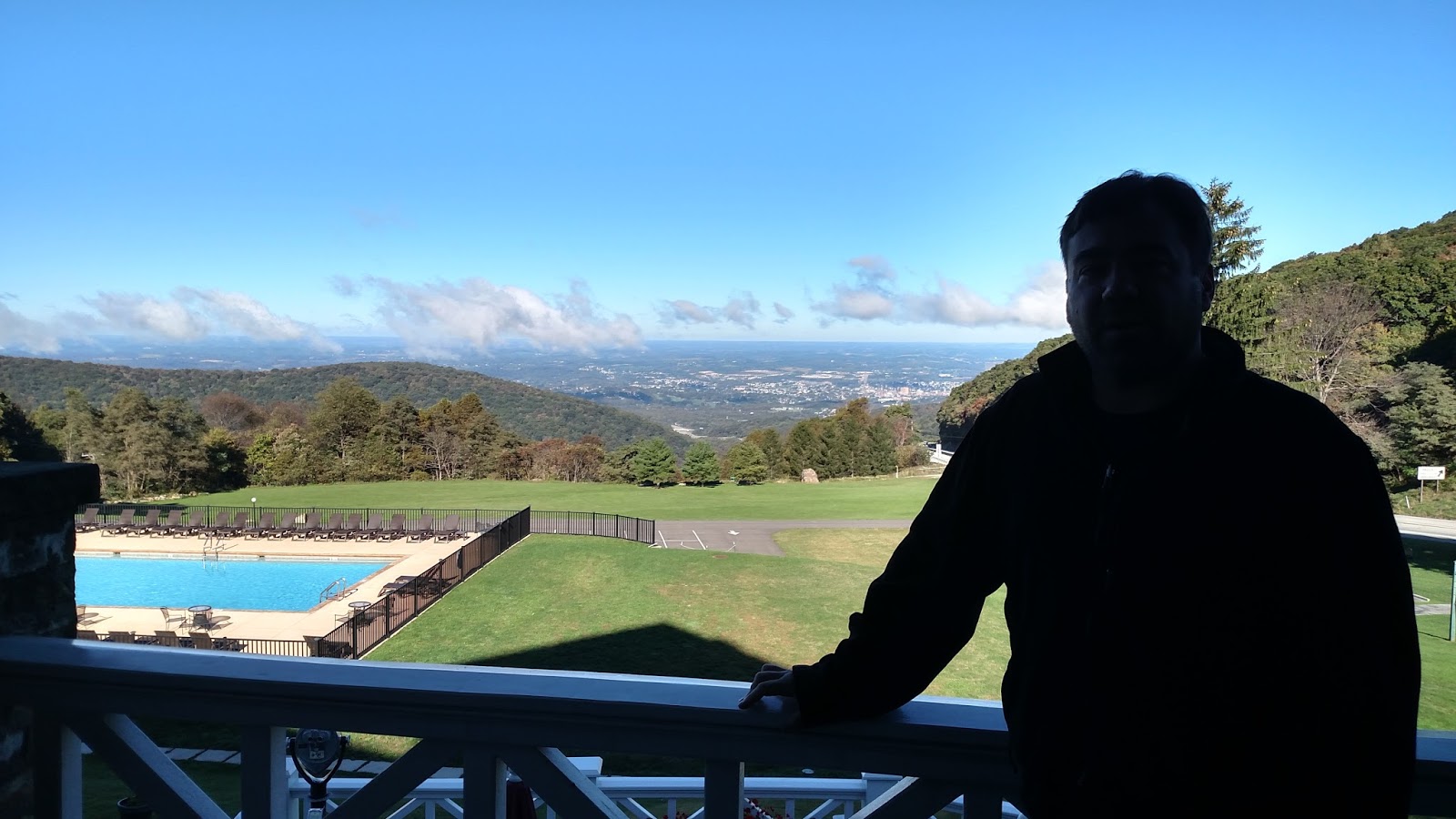 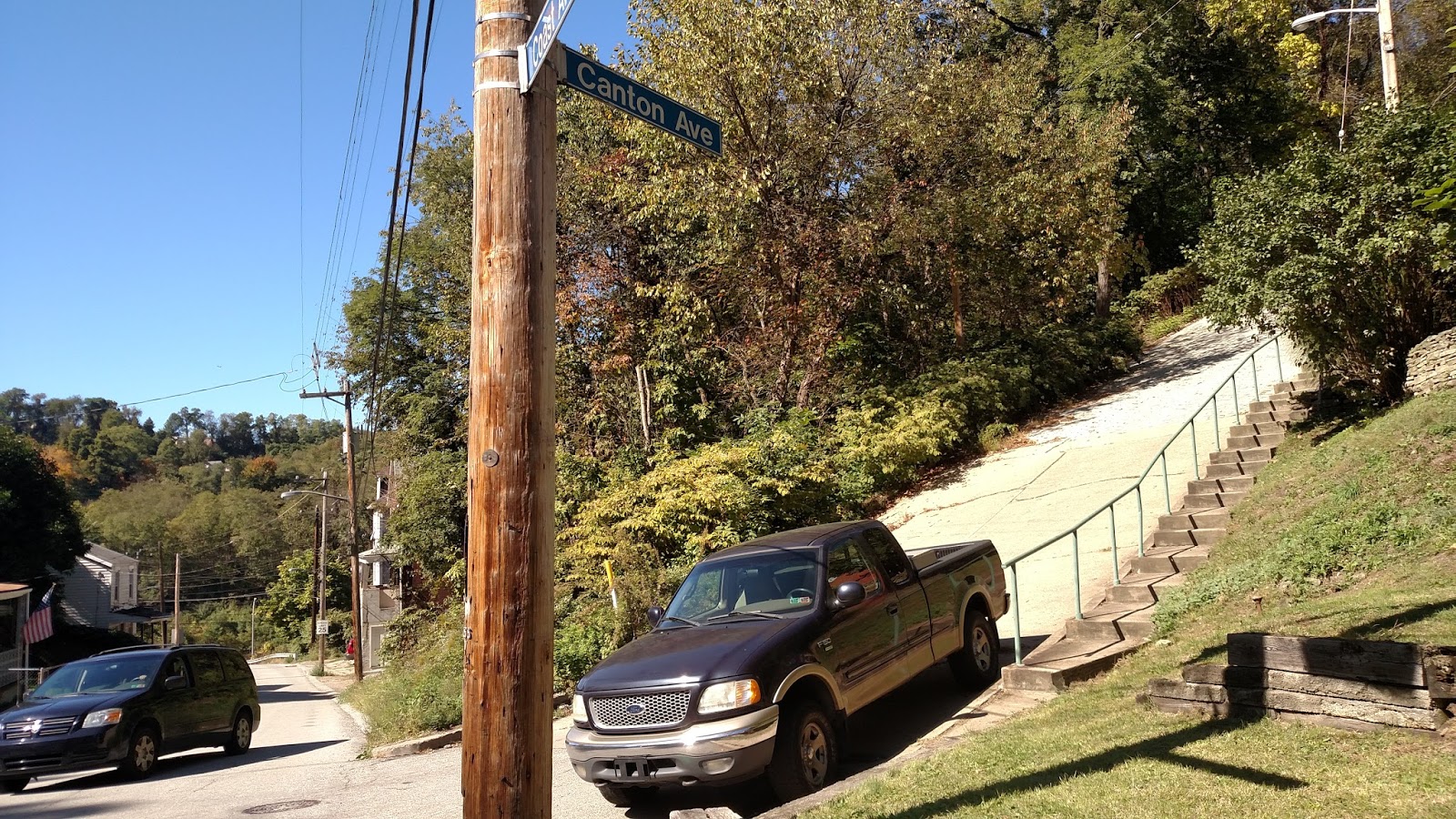 Above: supposedly the steepest street in the U.S., Canton Avenue. Below: to the extent that the Whiskey Rebellion had a headquarters, this was it. George Washington just could not stay out of Western Pennsylvania to save his life. 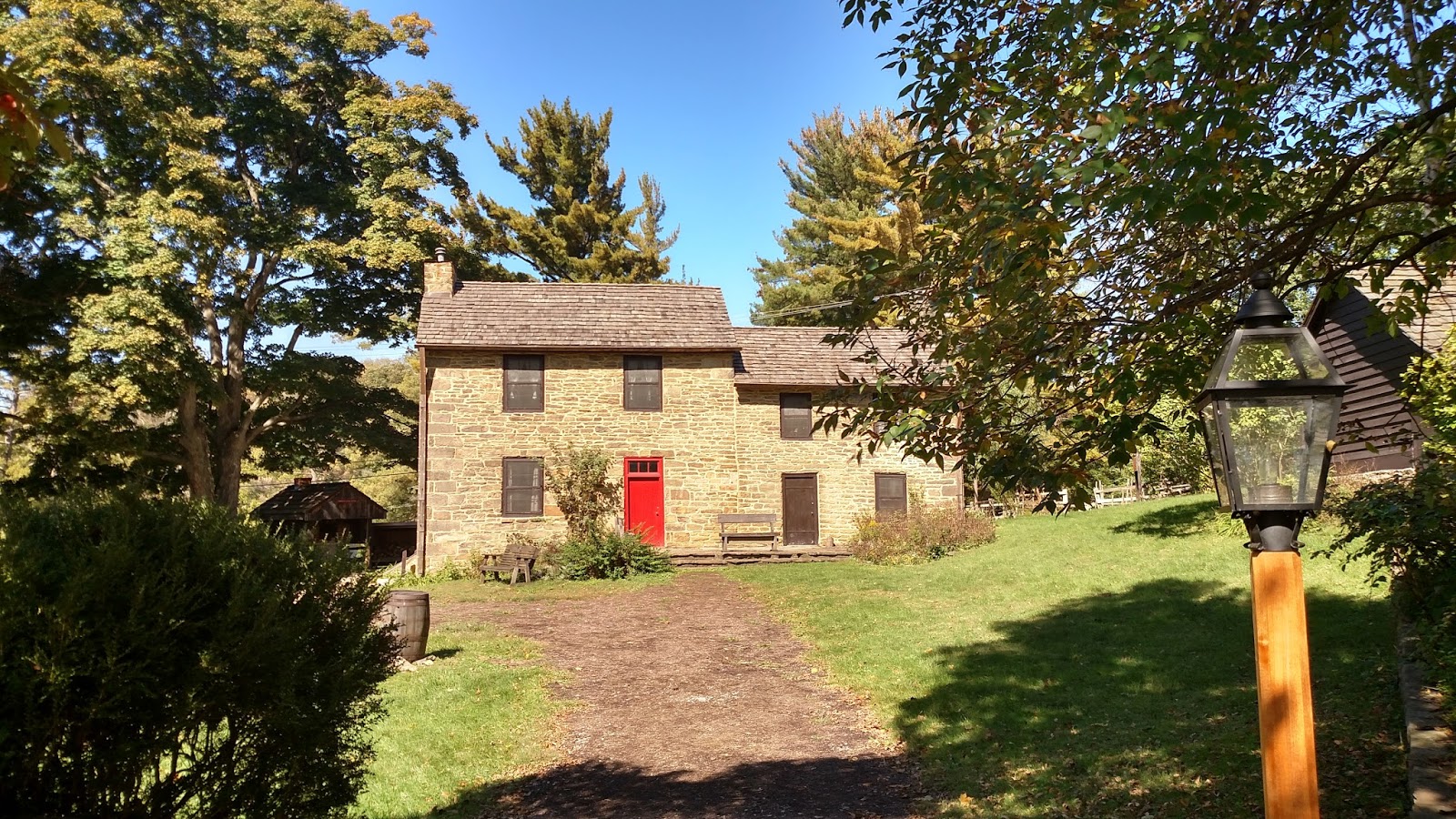 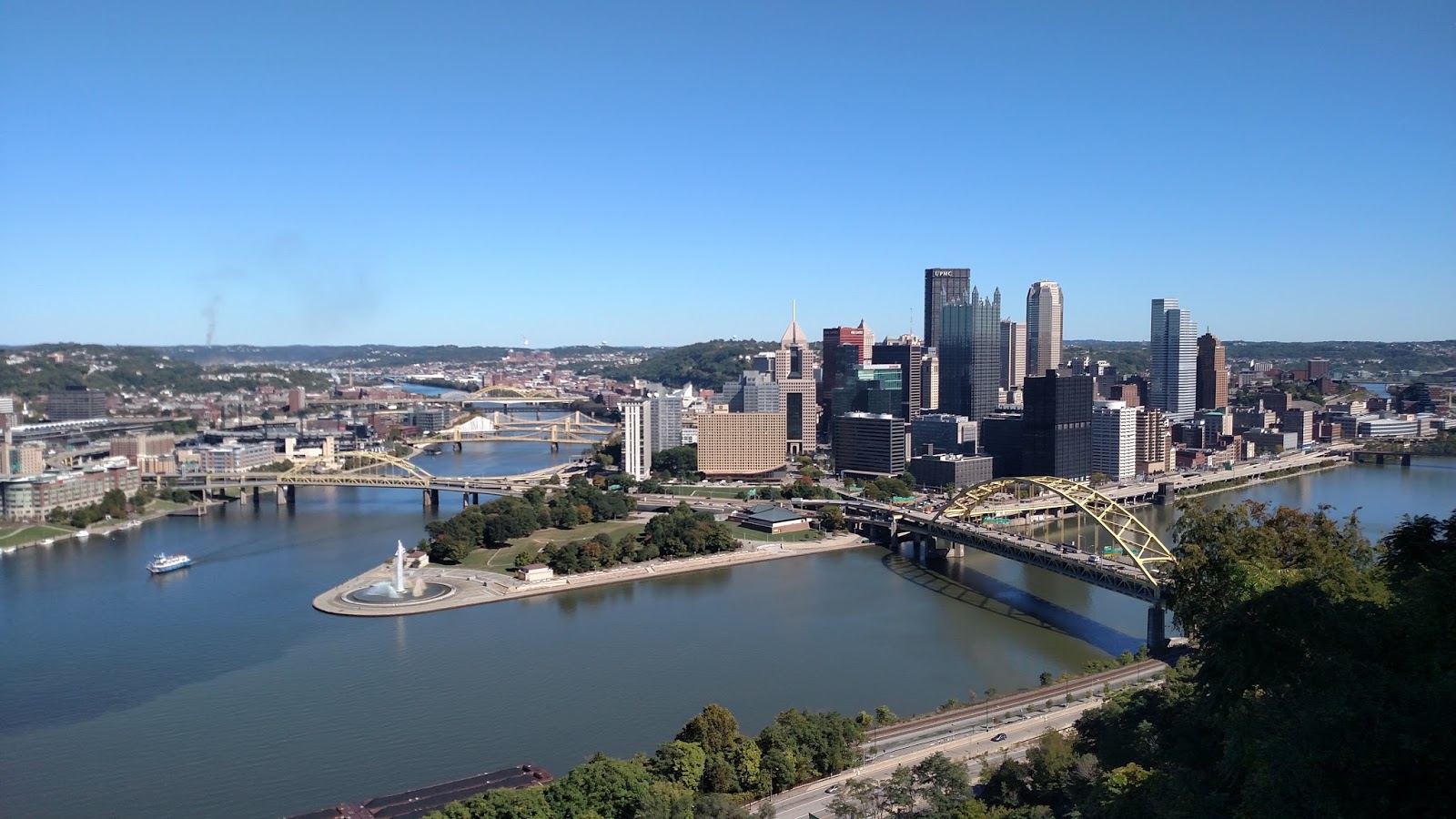 Above: Pittsburgh and the start of the Ohio River. Note the sediment coming from the Monongahela. Below: looking down the Duquesne Incline tracks back toward the river. Again you can see the sediment boundary from the Mon River. 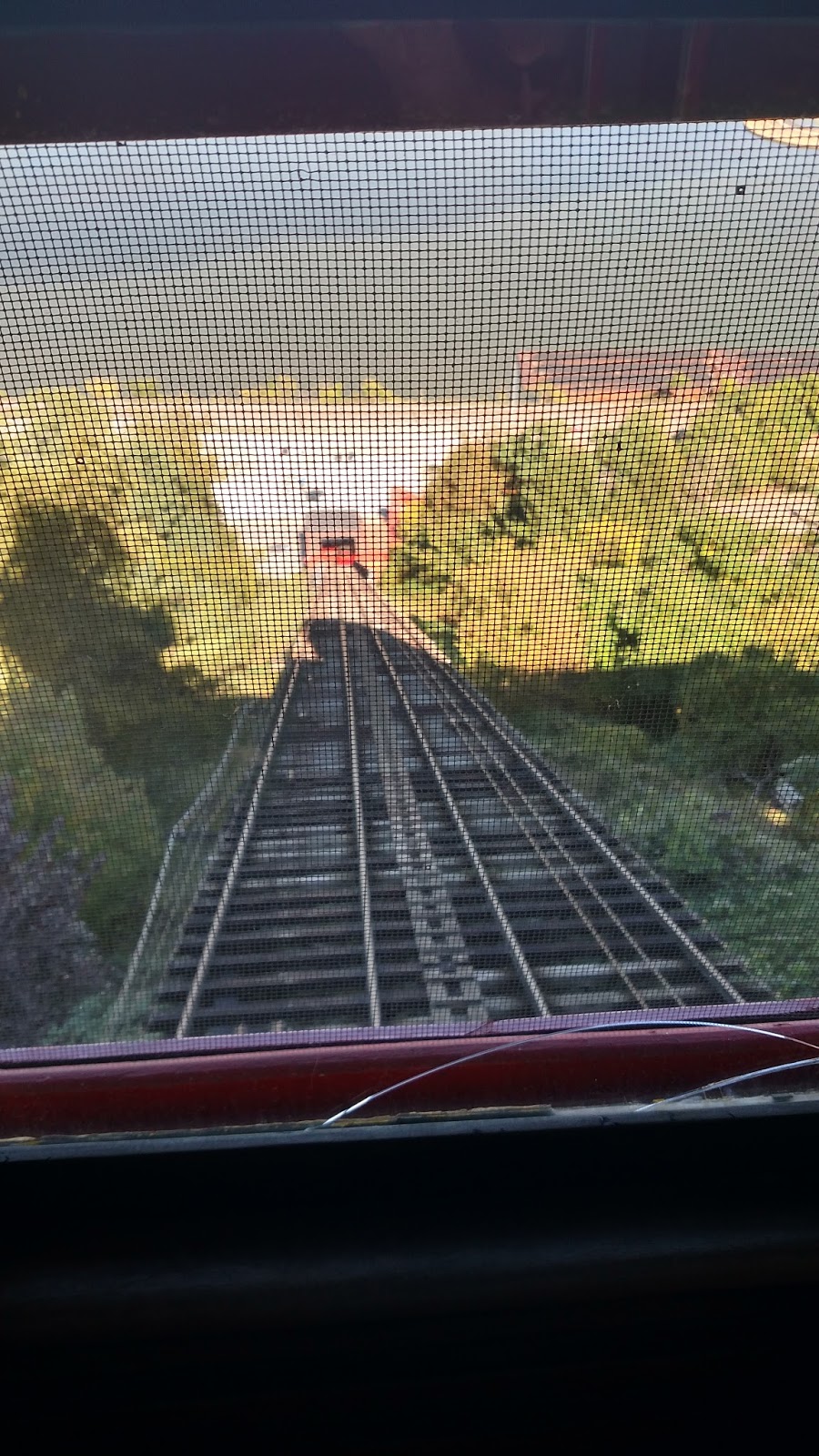 Other silly PA projects for the future:
- Laurel Highlands Trail
- Standing Stone Trail (Thousand Steps is part of it)
- Ascent of the Allegheny Front (route 30)
- PA-MD-DE tripoint (the only other one in PA that's not underwater)