Where Is Your Geological Midpoint? 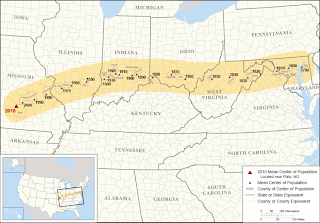 Above: the center of U.S. population over time.
From the U.S. Census Bureau.
In November 2012 I became more Western than the average American, when my "average" location in the U.S., based on where I've lived throughout my life and for how long, passed by the more slowly west-migrating U.S. center of population. Where's yours?
Posted by Michael Caton at 4/22/2014 06:53:00 PM

That's terrible, but at least you're still in North America.